AMD Can Roll the Dice With Xilinx

Advanced Micro Devices
is taking a big gamble in buying
Xilinx.
The chip maker’s latest results show why it can.

AMD announced both on Tuesday morning. For Xilinx, AMD will be paying the equivalent of about $35 billion in stock, representing a premium of about 35% to the value of Xilinx shares before The Wall Street Journal reported earlier this month that the two companies were discussing a deal. It is AMD’s largest acquisition ever and follows closely a string of other chip deals, most notably
Nvidia’s
announcement last month that it would purchase Arm Holdings from
Softbank Corp.
for $40 billion. 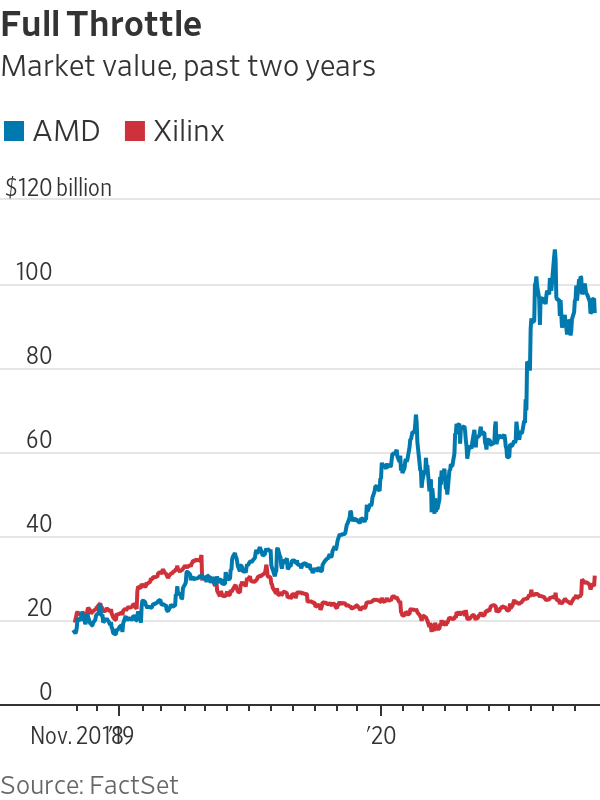 That deal also represents an aggressive move by an ascendant chip maker looking to significantly ramp up its data-center business. Both transactions face significant hurdles getting the necessary government approvals in a semiconductor market that has become highly politicized with the U.S.-China trade war. But Nvidia is a good deal larger than AMD and is more versed in the deal game. It is also buying what is predominantly a licensing business, while AMD faces the challenge of integrating another chip maker from a very different market segment and making the deal work in a way that has eluded
Intel Corp.
It bought Xilinx competitor Altera in 2015 but has yet to show much benefit from the move. 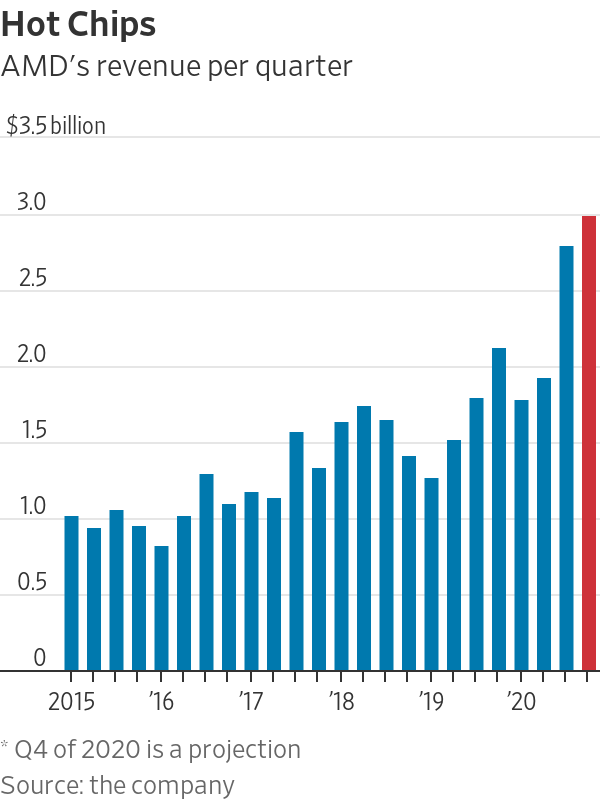 AMD is enjoying much stronger growth than Intel was at the time, though. That momentum has nearly doubled AMD’s market value just this year alone and made its stock into a valuable currency for expansion—quite helpful to a company with less than 10% of Intel’s cash on hand. And AMD’s results for the third quarter were among its best ever, with revenue surging 56% to a record $2.8 billion and adjusted operating income more than doubling to $525 million, also a record. Both were well ahead of Wall Street’s estimates for the period.

Those results contrasted sharply with Intel’s disappointing numbers for the same period reported last week. And AMD’s strong projection for the fourth quarter didn’t mirror its rival’s claims of a “digestion” period by large cloud providers that could depress data-center sales for the year-end period. AMD has the benefit of a strong product cycle to fall back on at the moment with its next-generation Milan server processors shipping to cloud customers this quarter. Intel’s comparable Ice Lake processors are expected to see volume shipping in the next quarter, but they suffer from the perception that it is built on a process technology now running behind the one used for AMD’s latest chips.

AMD will need all the momentum it can get. Chief Executive Lisa Su said Tuesday that a combined AMD-Xilinx can still average 20% annual revenue growth over the longer term—the same target she previously laid out for AMD alone. That reflects big hopes for Xilinx, which has averaged just over 6% growth annually over the last five years and is expected to see revenue fall this year.

Write to Dan Gallagher at dan.gallagher@wsj.com

Pfizer, Gilead, Ross: What to Watch When the Stock Market Opens Today