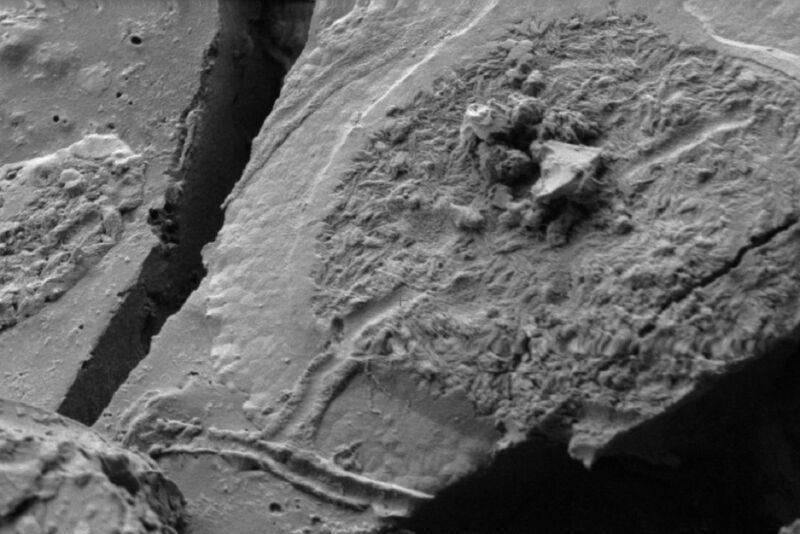 Enlarge / Using scanning electron microscopy (SEM), forensic archaeologists have found evidence of human neurons in the remains of one of the victims of the eruption of Mt. Vesuvius in AD 79.
Pier Paolo Patrone

Remember when we told you that the extreme heat produced during the eruption of Mt. Vesuvius in 79 AD may have been sufficient to vaporize body fluids and explode skulls—possibly even turning one victim’s brain into glass? We now have fresh evidence that this might, indeed, have been the case, according to a new paper in PLOS ONE, reporting the discovery of preserved human neurons in the victim with the “glassified” brain.

“The discovery of brain tissue in ancient human remains is an unusual event,” said co-author Pier Paulo Petrone of the University Federico II of Naples. “But what is extremely rare is the integral preservation of neuronal structures of a 2,000-years-ago central nervous system, in our case at an unprecedented resolution. These and other results of the bioanthropological and volcanological investigations underway at Herculaneum are gradually bringing to light details never before highlighted, which enrich the complex picture of events of the most famous of the Vesuvius eruptions.”

According to Tim Thompson, a forensic anthropologist at Teesside University in the UK, brains don’t typically survive for long after death. “It’s one of the earliest things to decompose in a standard decompositional context,” he told Ars. But it is not unprecedented.

“Brain tissue does preserve and it’s a lot more common than people imagine,” Alexandra Hayward, a graduate student in so-called “palaeoproteomics” at the University of Copenhagen in Denmark, told Ars. To date, she has located some 1,300 preserved brains dating back to the mid-16th and mid-17th centuries. The Vesuvian preserved brain studied by Petrone et al. is both very old (although not the oldest) and unusual in terms of the hypothesis proposed about the precise mechanism by which it was preserved.

The eruption of Mt. Vesuvius released thermal energy roughly equivalent to 100,000 times the atomic bombs dropped on Hiroshima and Nagasaki at the end of World War II, spewing molten rock, pumice, and hot ash over the cities of Pompeii and Herculaneum in particular. The vast majority of the victims died of asphyxiation, choking to death on the thick clouds of noxious gas and ash.

But a 2001 study in Nature, co-authored by Petrone, estimated a temperature of 500° Celsius (932° Fahrenheit) for the pyroclastic surge that destroyed Pompeii, sufficient to kill inhabitants in fractions of a second. Back in 2018, we reported on Petrone’s conclusion that inhabitants of Herculaneum may have suffered a similar fate. There was fracturing in the bones and “cracking and explosion” of the skullcaps, consistent with forensic cases where skulls burst from extreme heat.

And earlier this year, we reported on Petrone’s follow-up study, offering additional evidence that extreme heat killed many victims. He and several colleagues completed an analysis of one victim’s skull in particular, first excavated in the 1960s from Herculaneum. The body was found on a wooden bed, buried in volcanic ash, and there was evidence of brain matter remains in the skull. According to Petrone et al., usually such brain matter would be “saponified” by the extreme heat—that is, it turned to soap (glycerol and fatty acids). But this particular victim’s brain matter had been vitrified, i.e., fused into glass. Petrone et al. estimated that temperatures could have been as high as 520° Celsius (984° Fahrenheit), based on evidence gleaned from charred wood at the site.

“This suggests that extreme radiant heat was able to ignite body fat and vaporize soft tissue,” the authors concluded. “The detection of glassy material from the victim’s head, of proteins expressed in human brain, and of fatty acids found in human hair indicates the thermally induced preservation of vitrified human brain tissue.”

According to Petrone, this latest paper looked at the genetic expression of those previously identified proteins and also included the results of using scanning electron microscopy (SEM) to image vitrified brain and spinal cord remains. They found that the images revealed distinctive features typical of the human central nervous system, including evidence for neurons and white matter axons.

“The extraordinary discovery of perfectly preserved ancient neuronal structures has been induced by the conversion of human tissue into glass, which is indicative of the rapid cooling of the hot volcanic ash clouds that hit Herculaneum at the beginning of the eruption” said co-author Guido Giordano, a volcanologist at the University of Roma Tre. The team concluded that the unique vitrification process that occurred at Herculaneum “froze” this particular victim’s neuronal structures, preserving them intact.

Earlier this year, Axel Petzold of University College London and several colleagues confirmed the preservation of neurocytoarchitecture in a 2,600-year-old Iron Age human skull excavated in Heslington, York, albeit via a different mechanism than the vitrification claimed by Petrone et al. Per Hayward, at least four recent papers have detected evidence of neurons in preserved ancient brains. It may be that there is more than one mechanism at work.

Thompson told bioarchaeologist Kristina Killgrove earlier this year that he doesn’t find the vaporization theory plausible, preferring his own alternate theory—based on skeletal and collagen evidence—that the victims at Herculaneum may have been essentially “baked” by lower-intensity heat, like roasting a joint in the oven. Even saponification (turning to soap) is not typical, per Hayward. She has scoured the literature on preserved brains, and of some 187 sources, only 9 percent described something akin to saponification—and only one of those had been chemically confirmed.

Thompson found this latest paper interesting, but also “frustrating,” particularly because the authors don’t include their raw data—just a list of the proteins and related gene expressions. “There needs to be greater information on the data the team have recovered and greater reference to previous published work,” he said. “This would show that preserved brains from archaeological and historical contexts are not actually that rare. I was more interested in knowing why brain material would preserve so well in this particular context, when the same team has argued repeatedly that the soft tissues of the victims of Herculaneum were completely vaporized. Herculaneum is such an interesting and complicated context for preservation that that aspect needs much more exploration.”

“It’s interesting that this one individual seems to have brain tissue preserved while all the other victims are alleged to have essentially vaporized.”

According to Hayward, two recent paleo-proteomic studies reported hundreds of proteins, whereas Petrone et al. recovered just nine. “I’d be curious to know why these nine proteins have been recovered and whether it’s anything to do with the way this brain was preserved,” she said. “It’s very hard to investigate that without access to the raw data.”

It’s not the first time data has been withheld in the field of ancient proteins, but Thompson, Hayward, and her University of Copenhagen colleague Matthew Collins all believe doing so is in the community’s long-term best interests. “When we analyze ancient proteomes, we typically only identify 3 percent of the queries the instruments are making,” Collins told Ars. “So when we publish a paper we release all of the raw data. It’s generally accessible and downloadable and others can come along with new software strategies and new analytical approaches which could reveal much more.”

One thing everyone can agree upon is that the fusion of forensic medicine and anthropology, along with new cutting-edge tools for imaging and analysis, is proving a boon to such studies. Collins cites the surge in personalized medicine, which brought high throughput genetic sequencing and proteomics into the mix. Add high resonance imaging technology well suited to analyzing ancient samples, and the result is a significant increase in the amount of research and resulting publications. There is also much more interdisciplinary collaboration. “We’re all bringing different methodologies and ideas to the table, because we realize that only if we collaborate together will we actually understand what’s going on in these studies,” said Collins.

Celebs back away from Trump admin.’s $300M COVID-19 ad campaign