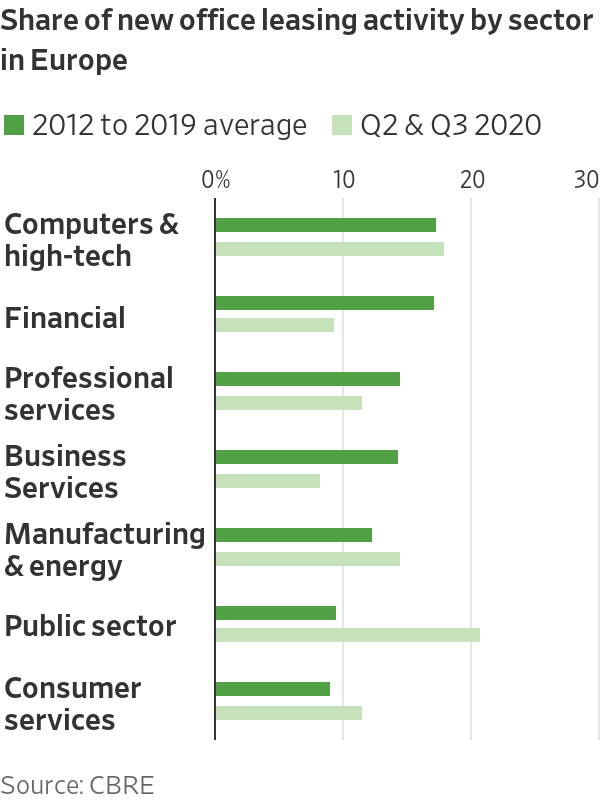 Tech companies have talked the loudest about shifting away from the office. It is banks that are putting their money where their mouth is.

Takeup of new office space in Europe was weak over the late summer. Leasing activity halved during the third quarter compared with the same period of 2019, according to data from real-estate company JLL. In the U.S., the decline was even sharper at 55%. The physical constraints of lockdowns made it hard for companies to get out and look at properties. And firms are reluctant to take on extra space until they understand how the shift to home working will play out and what shape the economy is in.

Already, though, differences are emerging between industries. Public-sector tenants have been a bright spot for real-estate owners. Less exposed to the business cycle, they have doubled their usual share of overall leasing activity in Europe since the pandemic began, data from real-estate services giant CBRE shows. Tech companies’ share was 17.9%, in line with the average between 2012 and 2019.

The numbers should provide some comfort to landlords after a string of tech bosses said more of their employees will work remotely in future.
Facebook
—which expects half of its workforce to be based in the home office within a decade—signed the biggest New York lease deal of the third quarter when it took over the Farley Building by Penn Station.
Microsoft
bulked up in Dublin, while
Netflix
added more space in London. TikTok is currently in talks to increase its office space in the U.K. capital, according to reports in the Times of London.

Banks look far more cautious. Finance companies’ share of overall European leasing activity dipped to 9% during the second and third quarters, from their 17% average. “Some of this might have happened anyway as banks were already trying to be more efficient with their use of space. Now there is greater scrutiny on costs,” says Richard Holberton, head of CBRE’s European office research. Businesses in hard-hit industries such as media and advertising also stepped back sharply.

These are hardly normal times for leasing trends, and it will take several quarters to see whether the behavior sticks. Based on the earliest signs, though, office landlords can tune out the noise from Silicon Valley and concentrate on what banks and other troubled sectors are saying. The problem tenants of 2021 may be companies that need to cut real-estate costs, not those that could.

How a Coronavirus Vaccine Maker's Stock Went From Dud to Star