Bed, Bath & Beyond, Micron Technology, Moderna: What to Watch When the Market Opens

Here’s what we’re watching ahead of the opening bell on Thursday.

—U.S. stock futures rose as investors looked past Wednesday night’s storming of Congress by a pro-Trump mob that disrupted the Senate’s confirmation of
Joe Biden

Futures on the Nasdaq-100 Index gained 0.7%, suggesting that giant technology stocks may recoup some of their losses. Tech shares took a beating Wednesday when investors pushed into other stocks that are more dependent on economic growth.

—
Bed Bath & Beyond
stock plunged more than 14% in premarket trading, after sales and profits both turned out weaker than expected in the third quarter. The company blamed Covid-19, which meant fewer shoppers in its stores and shipping problems.

—
Walgreens Boots Alliance
shares jumped 4.6% premarket, adding to Wednesday’s 4.5% rise, after it beat expectations with first-quarter earnings. Headline sales were up nearly 6%, although Walgreens was pushed into a loss by a $1.5 billion charge linked to its investment in
AmerisourceBergen.

—
Micron Technology
is up 1.3% in premarket trading ahead of its earnings due Thursday afternoon, adding to the 2.6% rise its stock has enjoyed since the start of the year. Citigroup’s analyst this week had a dramatic pivot on the stock, moving it from sell straight to buy and nearly trebling the price target to $100 from $35.

—Moderna is up nearly 3% in premarket, building on a 6.5% jump Wednesday after the European Union gave a green light to its Covid-19 vaccine for use in Europe.

—
Twitter
shares slipped 1.7% premarket following a 1.2% drop the day before. The social media site blocked President Trump’s account and deleted some of his posts late on Wednesday after he continued to claim he’d won the election in a “sacred landslide.”
Facebook
also blocked Mr. Trump from posting, but its shares were 1.1% better after falling nearly 3% Wednesday.

Shares of Wall Street giant
Goldman Sachs
closed at a record for the first time in nearly three years, a sign of how much the bank has profited from the financial chaos of the past year. Its stock has risen about 19% over the past month, far more than any of its five big-bank peers.

Chart of the Day 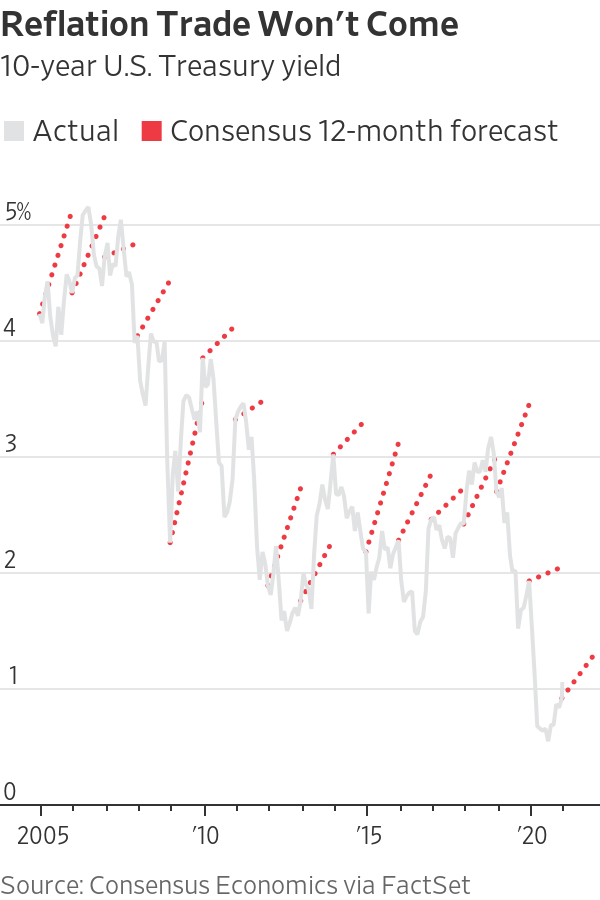 The politics of reflation matters most for investors, but the long-term impact of elections is often quite different than it appears the day after the vote, writes columnist

Must Reads Since You Went to Bed

Robinhood Wants More Female Investors. So Does Everyone Else.

The SPAC Bubble May Burst—and Not a Day Too Soon