One of China’s largest securities firms is under investigation for suspected market manipulation and its role in the recent debt-related woes of a state-owned coal miner, following a tumultuous week in Chinese credit markets.

Haitong Securities Co.
, a Shanghai-based brokerage, was singled out late Wednesday by the National Association of Financial Market Institutional Investors, a self-regulating body whose members include state-owned and private-sector banks, brokers, asset managers and other industry players. China’s central bank supervises the group.

The association said Haitong and its subsidiaries “are suspected of providing assistance” to Yongcheng Coal & Electricity Holding Group Co., which “issued bonds in violation of regulations.” 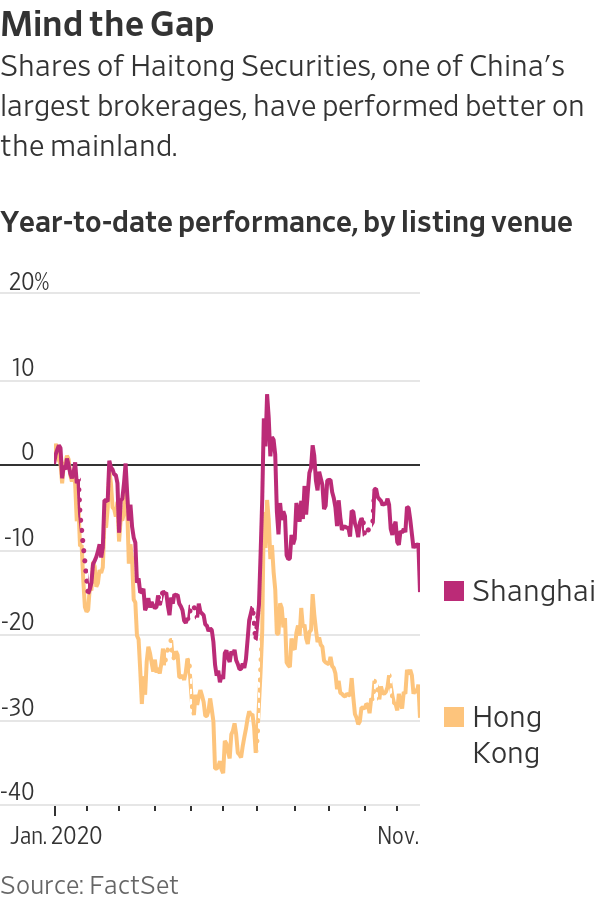 Haitong is also suspected of manipulating the market for nonfinancial corporate debt in China, the association said, adding that the brokerage could be subject to strict industry sanctions and other actions from relevant authorities.

Haitong’s Shanghai-listed shares fell 6.3% on Thursday following the news, while its Hong Kong-listed shares dropped 5.3%. In filings to both exchanges, the securities firm said it would cooperate fully with the investigation and comply with the industry association’s requirements for the issuance of debt-financing instruments.

It isn’t clear what Haitong did to draw the ire of the industry group. The company is a large underwriter and trader of corporate bonds and was one of 25 firms that handled a recent bond sale by Yongcheng Coal a few weeks before the miner defaulted on other debt. Haitong said it had no comment beyond its statement.

The state-owned miner previously had a triple-A rating from a Chinese credit-rating firm and recently raised 1 billion yuan by issuing a three-year bond on Oct. 20.

Before Yongcheng Coal’s default, the company transferred its stake in a bank and several chemical businesses to other local state-controlled companies.

The National Association of Financial Market Institutional Investors is also investigating Yongcheng Coal and is looking at whether the company fully disclosed risks about its business to investors ahead of the October bond sale. The firm this week paid investors 32.4 million yuan, or about $4.9 million, in overdue interest and said it is trying to raise money to repay the principal amount that it missed.

Yongcheng Coal’s default came a few days after the bond default of a company that owns
Brilliance China Automotive Holdings Ltd.
, the joint-venture partner of
BMW AG
in China. Another bond default this past weekend by state-backed chip maker Tsinghua Unigroup Co. has added to investor unease and led to price declines in some corporate bonds considered to be riskier. Yields on some triple-A-rated bonds and short-term debt have recently risen following Yongcheng Coal’s default and as investors worry about waning local government support for large companies.

Haitong, which was founded in 1988, is one of China’s top brokerage firms with businesses spanning securities trading, asset management and investment banking. It has helped numerous companies raise funds from capital markets via stock and debt sales. Haitong had total assets of more than 680 billion yuan at the end of June 2020, according to its website.

The firm is a major player in the Chinese bond market. In the year to date period, Haitong underwrote 459.7 billion yuan, or the equivalent of $69.8 billion, worth of bonds and ranked fifth among Chinese securities firms with a market share of 5.3%, according to Wind.

Yang Hao, a fixed-income analyst from
Nanjing Securities Co.
, said he views the industry association’s move as an attempt to reassure investors that authorities are taking steps to help maintain orderly markets. He added that the self-regulatory body has limited enforcement powers and any major action—if wrongdoing is found—would have to be taken by the China Securities Regulatory Commission.

Write to Xie Yu at Yu.Xie@wsj.com and Chong Koh Ping at chong.kohping@wsj.com