For the second time in three months,
Apple Inc.,
Amazon.
com Inc.,
Facebook Inc.
and Google parent
Alphabet Inc.
reported results the same afternoon. Much smaller but highly influential
Twitter Inc.
joined the crowd Thursday with its own report. The numbers were predictably huge, and largely ahead of what analysts were expecting to see.

Yet investors largely gave them a thumbs down. Alphabet shares jumped nearly 7% after hours, but it was the only one of the five to make gains following their respective reports. 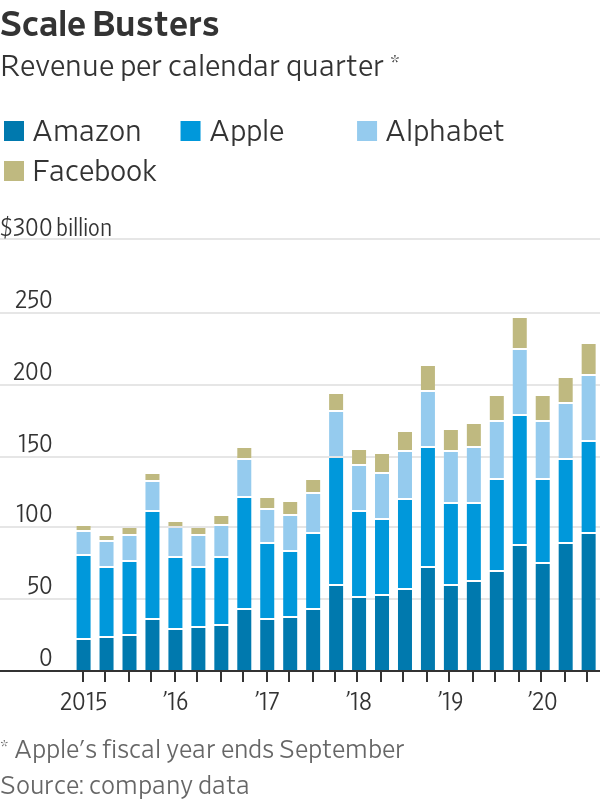 Having a low bar helps; Alphabet’s shares have risen only 16% year to date compared with the average 56% gain by Apple, Amazon and Facebook. The company also saw a sharp bounceback for its core Google advertising business, which reported its first-ever decline in the second quarter. It also announced plans to turn its Google Cloud business into a separate reporting segment starting with its fourth-quarter report. Amazon’s share price surged 118% in 2015 when the e-commerce giant started doing the same for its AWS unit.

Apple, by contrast, brought the day’s biggest disappointment, though not in its results for the quarter ended Sept. 26, which included better-than-expected revenue despite a delay in the launch of this year’s iPhones. The company declined to give a revenue forecast for the December period, which several analysts expect to kick off a “supercycle” of 5G iPhone sales. Analyst Toni Sacconaghi of Bernstein said Apple would need to guide expectations to or above the $101 billion in revenue Wall Street had targeted for the quarter “for investors not to be disappointed.”

More Heard on the Street

Amazon and Facebook also posted strong growth for the third quarter while adopting a cautious tone for what lies ahead. For Amazon, that came in the form of an operating income projection for the fourth quarter that was below Wall Street’s target. Results for the company’s closely watched AWS cloud business were also only in line with the Street’s projections. Facebook doesn’t give specific forecasts, but Chief Financial Officer David Wehner projected more headwinds for 2021, which will include changes to Apple’s mobile operating system that could make life harder for advertisers, as well as “the evolving regulatory landscape.”

The last speaks to the biggest risk facing the tech sector’s giants—one that will linger no matter the outcome of next week’s U.S. election. The problem is that regulators and lawmakers think Big Tech is too big and too powerful. The combined $228 billion in revenue just reported by Apple, Amazon, Alphabet and Facebook in the midst of a worsening pandemic won’t help them convince critics otherwise.

Write to Dan Gallagher at dan.gallagher@wsj.com

London Landlords Will Work Harder for the Rent