Black hole mergers may emit double chirps, giving us clues about their shape 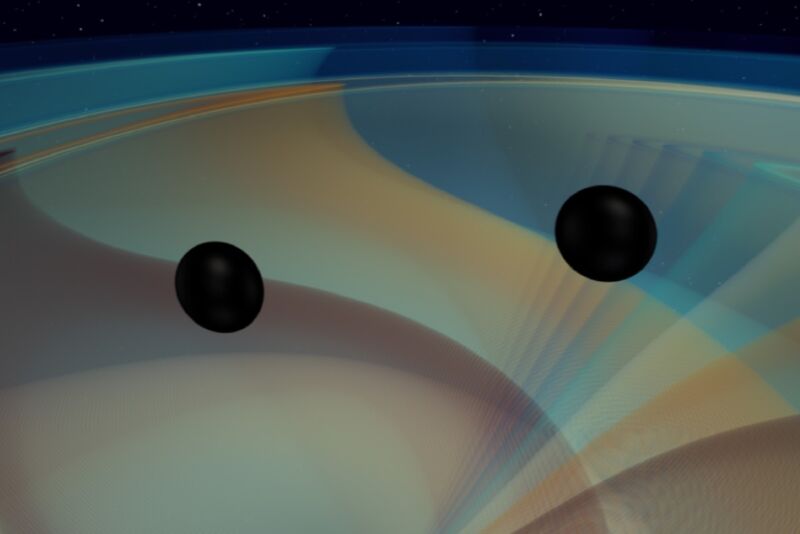 Enlarge / Artist’s illustration of a black hole merger. New simulations suggest that colliding black holes should emit not one, but multiple telltale “chirps,” when the collision is observed from the “equator” of the final black hole.
N. Fischer, H. Pfeiffer, A. Buonanno, SXS Collaboration

Physicists hunt for merging black holes and other similar cosmic events through the detection of gravitational waves, from which they can glean valuable information, such as the mass of both the precursor black holes and the final, larger black hole that results from the merger. Now a team of scientists has found evidence from supercomputer simulations that those waves may also encode the shape of merging black holes as they settle into their final form, according to a new paper published in the Nature journal Communications Physics.

General relativity predicts that two merging black holes should give off powerful gravitational waves—ripples in the fabric of spacetime so faint that they’re very difficult to detect. The waveforms of those signals serve as an audio fingerprint of the two black holes spiraling inward toward each other and merging in a massive collision event, sending powerful shock waves across spacetime. Physicists look for a telltale “chirp” pattern in the data as the two black holes collide. The new remnant black hole vibrates from the force of that impact, and those vibrations—called a “ringdown” since it is much like the sound of a bell being struck—also produce gravitational waves. Furthermore, the gravitational-wave signals have multiple frequencies, dubbed “overtones,” that fade away at different rates (decay), with each tone corresponding to a vibrational frequency of the new black hole.

LIGO detects these gravitational waves via laser interferometry, using high-powered lasers to measure tiny changes in the distance between two objects positioned kilometers apart. (LIGO has detectors in Hanford, Washington, and in Livingston, Louisiana, while a third detector in Italy, Advanced VIRGO, came online in 2016.) On September 14, 2015, at 5:51am EDT, both detectors picked up signals within milliseconds of each other for the very first time.

Since then, LIGO has been upgraded and has conducted two more runs, kicking off its third run on April 1, 2019. Within a month, the collaboration detected five more gravitational wave events: three from merging black holes, one from a neutron star merger, and another that may have been the first instance of a neutron star/black-hole merger.

More recently, in June 2020 the collaboration announced the detection of a binary black hole merger on May 21, 2019 (designated S190521g). And just last month, the LIGO/VIRGO collaboration announced that it had detected a gravitational wave signal from another black hole merger. This was the most massive and most distant merger yet detected by the collaboration, and it produced the most energetic signal detected thus far. It showed up in the data as more of a “bang” than the usual “chirp.” The detection also marked the first direct observation of an intermediate-mass black hole.

According to Christopher Evans, a graduate student at Georgia Tech and a co-author of this latest paper, he and his colleagues conducted supercomputer simulations of black hole collisions and then compared the gravitational waves emitted by the remnant black hole to its rapidly changing shape as it settled into its final form. It turns out that standard gravitational-wave observations typically study the merger from the top of the remnant black hole. When the team looked at the event from the perspective of the remnant’s equator, the simulations showed that gravitational wave signals “are far more rich and complex than commonly thought,” Evans said.

“When we observed black holes from their equator, we found that the final black hole emits a more complex signal, with a pitch that goes up and down a few times before it dies,” said co-author Juan Calderón Bustillo of the Galician Institute for High Energy Physics in Santiago de Compostela, Spain. “In other words, the black hole actually chirps several times.”

And that more complex signal also seems to encode information about what shape the final remnant black hole will take. “When the two original, ‘parent’ black holes are of different sizes, the final black hole initially looks like a chestnut, with a cusp on one side and a wider, smoother back on the other,” said Bustillo. “It turns out that the black hole emits more intense gravitational waves through its most curved regions, which are those surrounding its cusp. This is because the remnant black hole is also spinning and its cusp and back repeatedly point to all observers, producing multiple chirps.”

The authors conclude that the existing sensitivity of the LIGO/VIRGO detectors should be sufficient to observe this post-merger chirp signature in their data.