Trump supporters near the U.S Capitol, on January 06, 2021 in Washington, DC. The protesters … [+] stormed the historic building, breaking windows and clashing with police. Trump supporters had gathered in the nation’s capital today to protest the ratification of President-elect Joe Biden’s Electoral College victory over President Trump in the 2020 election. (Photo by Shay Horse/NurPhoto via Getty Images)

The deadly U.S. Capitol riots last week are likely to keep guns sales going strong, stoked by growing fears of civil unrest and the specter of more gun control under a Democratic administration.

Civil unrest has served as a prime driver of gun sales during the pandemic, as Americans buy firearms for self-protection. Federal background checks for gun purchases surged 40% to a record 39.7 million in 2020, according to the Federal Bureau of Investigation, while gunmakers Smith & Wesson and Sturm, Ruger RGR reported double-digit increases in sales.

The sales-driving anxiety over civil unrest isn’t likely to let up, with the FBI warning of “armed protests” in 50 states leading up to the Inauguration of President-elect Joseph Biden on Jan. 20, according to news reports. State Capitols are on high alert.

“I’m confident that widespread civil unrest will push gun sales to still higher levels,” said Philip J. Cook, a sociologist and gun control expert who wrote “The Gun Debate: What Everyone Needs to Know.”  “So will the fact that the Senate, House and Presidency will all be under Democratic control beginning in 2020. That creates a more realistic possibility that Congress will finally act on one or more gun control measures.”

Supporters of President Trump stormed the Capitol on Jan. 6 in a violent rampage that resulted in five deaths, including a Capitol Police officer who was killed in the attack, and also a Trump supporter who was shot by a police officer. The Trump supporters breached the Capitol and swarmed in, forcing the temporary evacuation of Congress during the counting of Electoral College votes to confirm the election of President-elect Biden.

Is This Mystery Unmanned Vessel Really A Chinese Spy?

“I do think that people are now realizing with the Senate loss and incoming Biden administration, that gun control is going to be front-and-center with control of all three branches,” said Steve Dowdy, owner of Bob’s Gun Shop in Norfolk, Virginia, who believes that the possibility of more gun control is a bigger gun sales driver than the Capitol riots.

This could continue to fuel sales for guns and ammunition in the short term, at least. But Dowdy also said that with inventories running low, gun retailers are still dealing with high demand but thin supply, as manufacturers scramble to keep up.

Federal authorities arrested 13 suspects on the day of the Capitol riots, including an Alabama man who allegedly carried two handguns near the Capitol building after the riots, according to the Justice Department. The DOJ also said an M4 assault rifle and 11 homemade bombs were stashed in his truck nearby. Another suspect was charged with carrying a Taurus G2C 9mm handgun on the grounds of the U.S. Capitol. 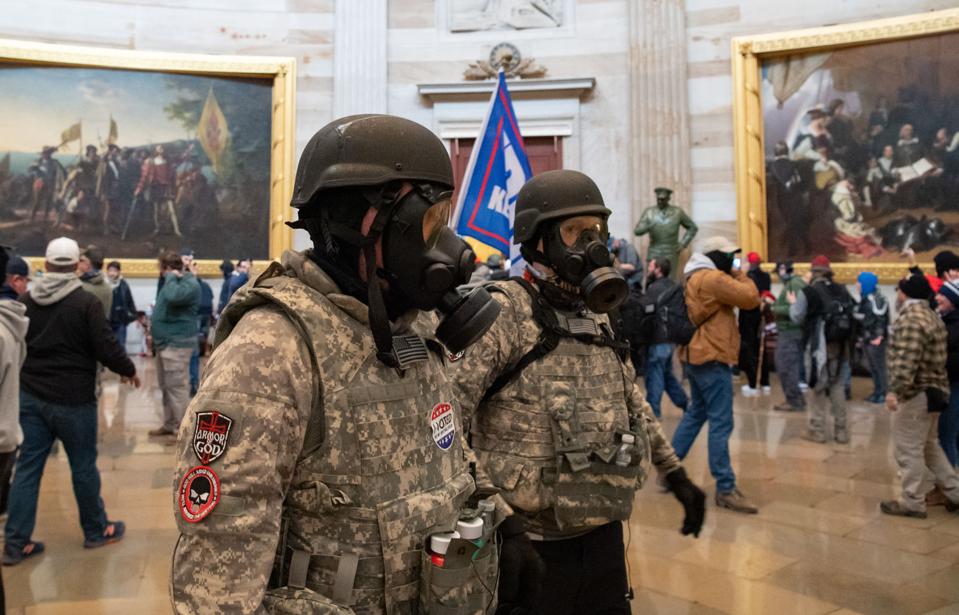 (FILES) Supporters of US President Donald Trump wear gas masks and military-style apparel as they … [+] walk around inside the Rotunda after breaching the US Capitol in Washington, DC, January 6, 2021. – Demonstrators breeched security and entered the Capitol as Congress debated the 2020 presidential election Electoral Vote Certification. (Photo by SAUL LOEB / AFP) (Photo by SAUL LOEB/AFP via Getty Images)

The presence of gun-toting suspects near the Capitol as it was being overrun by Trump supporters is sending up red flags for gun control advocates.

“This administration already promises to be the strongest in history on gun safety, but the insurrection at the Capitol has underlined the urgent need to act swiftly and decisively,” said John Feinblatt, President of Everytown for Gun Safety, a gun control group. “Throughout the past year, armed extremists have killed people, threatened our right to peacefully protest, and attacked our very democracy, and passing sensible gun laws that disarm them must be a top priority.”

It remains to be seen whether the Capitol riots will prompt more restrictive gun control under the administration of President-elect Biden, a Democrat who owns guns and is already planning an aggressive gun control policy. Biden has proposed a ban on the manufacture of assault rifles, or military-style semiautomatic rifles, for the civilian market. This would include AR-15s like the M4. He also wants to repeal the Protection of Lawful Commerce In Arms Act, which protects gun makers and dealers from liability when their guns are used in crimes.

The Capitol riots did not feature the gun-toting open carry protesters seen at other civil unrest incidents, like in Kenosha, Wisconsin last year, when a suspect with an AR-15 allegedly killed two rival protesters.

When asked about the potential of a gun control backlash from the Capitol riots, Mark Oliva, public affairs director for the gun industry group National Shooting Sports Foundation, said the legal firearms industry has nothing to do with it. He said the firearms arrests at the Capitol are “criminal matters” and therefore “not industry matters.” He said an M4 rifle isn’t allowed in Washington, DC, and only law enforcement and members of Congress are allowed to have firearms at the Capitol.

Regardless of whether of whether the Capitol riots will have any sort of gun control backlash, there seems to be little doubt that sales will keep booming in the era of civil unrest and looming gun control.

“I see no evidence that they’re going to slow down in any meaningful way until someone takes the pressure cooker off the heater,” said Brad Greenwood, associate professor of information systems and operations management at George Mason University, who co-authored a 2017 paper studying the impact of mass shootings on gun sales. “I have to imagine that they’ve been increasing manufacturing capacity during the pandemic. I have to image that their supply chains are going to meet demand.”