China's Economic Data: Guide for the Dazed and Confused

The world’s second-largest economy is incredibly influential—trends in China help determine everything from the global prices of steel and pork to the balance of military power in the Taiwan Strait. It is also widely misunderstood.

While skepticism of China’s official figures is widespread, and justifiably so, some of the more granular official data are actually very useful. The picture can and does change over time: When a certain economic data point becomes a political target in China, the incentives for officials to fudge it rise. Still, understanding the lay of the land can help investors spot suspicious deviations from trend—or changes in reporting—that might be an indication of problems officials would prefer to sweep under the rug.

Probably the simplest method is to pay more attention to nominal growth—or new output before adjusting for changes in prices—than the top-line “real” growth figure, both for gross domestic product and narrower indicators such as industrial output. There are three reasons. First, real growth has long been one of the ways officials are evaluated in China, and so there is a strong incentive to inflate it—and substantial evidence that has happened, particularly during downturns. For instance, after the housing and commodity market downturn of 2015 and early 2016, China’s Inner Mongolia province—a major coal producer—admitted that its 2016 industrial growth had been overstated by 40%.

Second, official statisticians use some questionable assumptions for the price adjustments to “real” growth. Oxford Economics notes that unlike the U.S. and Germany, which use more precise inflation indexes to adjust industrial growth in their national accounts, China relies on its producer-price index, which is strongly influenced by heavy industry and commodity prices. That could create problems if, for example, steel and coal prices fall substantially but more profitable, fast-growing sectors such as electronics or pharmaceuticals don’t see their prices change as much.

Most important, nominal growth lines up far better than so-called real growth with other cyclical indicators that aren’t controlled by government statisticians—like global metal prices and the profits of listed Chinese companies. That makes it more credible.

Unfortunately, nominal growth figures are only released once every three months. What about more high frequency data?

China’s headline industrial growth figure, which is released monthly, is of questionable value. But the more volatile data on output of individual industrial products is probably more reliable. For instance, an average of growth in output of steel, cement, glass and other heavy industrial products tends to follow Chinese housing prices, which you would expect since housing is the largest source of demand for these materials. And when Chinese housing demand is strong but industrial output is artificially weak—as in the forced steel capacity closures of 2017—global metal prices have skyrocketed, which is also what one would expect. 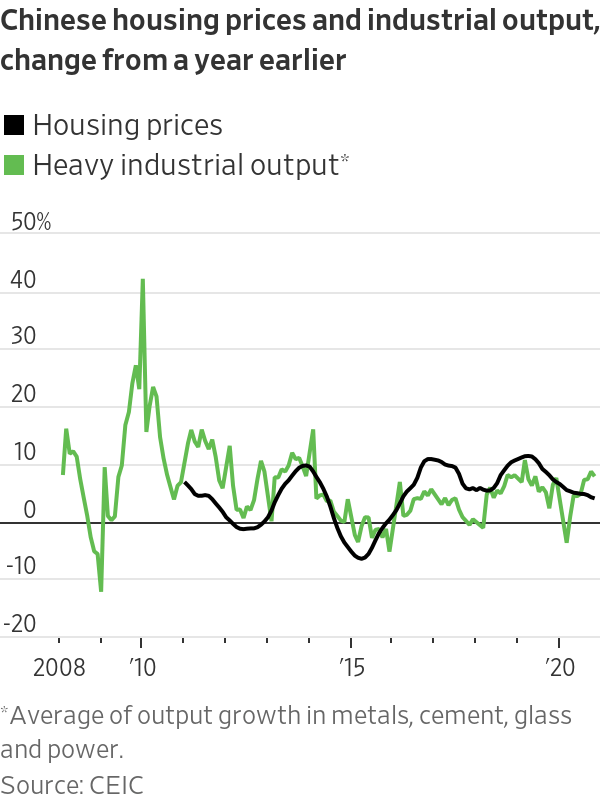 China has recently released a new series on unemployment—another very politicized data set—that may turn out to be better than its predecessor, which barely ever moved at all. But in the meantime the employment subindexes of the nation’s purchasing managers indexes are probably a reasonable proxy for the labor market. One reason to think that is true: they move with the trend in listed company profits, as expected, since companies should tend to hire more when times are good and profits are rising.

Unfortunately, the disappearance of useful official data series in China is also a common occurrence—oftentimes after that data begins to show trends counter to the narrative that the government is pushing. In late 2018 as the trade war with the U.S. was beginning to bite, China’s export hub Guangdong province was ordered to stop publishing its own purchasing managers index. The official explanation was the surveying office hadn’t properly applied to renew its authority to compile the index, although it had been publishing the series regularly for seven years previously. A widely watched official series detailing how much lending goes to state-owned versus private sector borrowers—another sensitive, highly politicized topic in recent years—has also disappeared since 2016.

All of this sometimes makes finding and interpreting Chinese data more like searching for buried treasure than most analysts and economists are accustomed to. But on the bright side there is always something new to unearth.

Write to Nathaniel Taplin at nathaniel.taplin@wsj.com