Chitin could be used to build tools and habitats on Mars, study finds 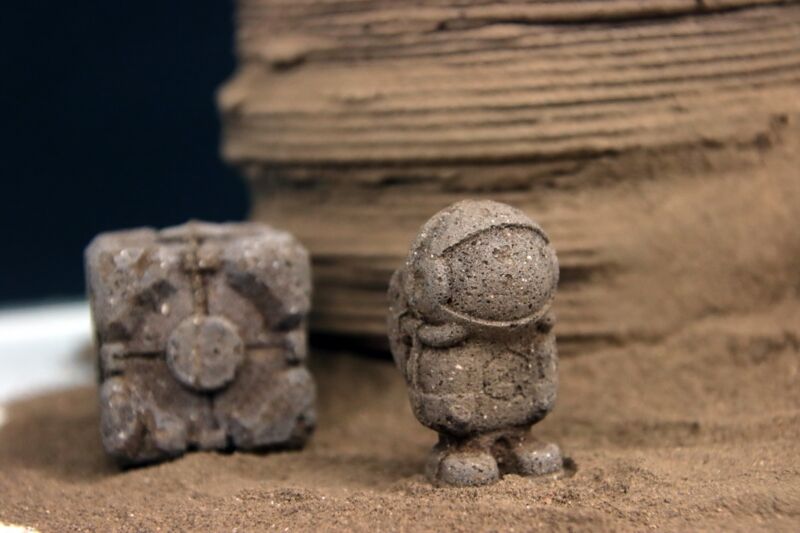 Enlarge / Scientists mixed chitin—an organic polymer found in abundance in arthropods, as well as fish scales—with a mineral that mimics the properties of Martian soil to create a viable new material for building tools and shelters on Mars.
Javier G. Fernandez

Space aficionados who dream of one day colonizing Mars must grapple with the stark reality of the planet’s limited natural resources, particularly when it comes to building materials. A team of scientists from the Singapore University of Technology and Design discovered that, using simple chemistry, the organic polymer chitin—contained in the exoskeletons of insects and crustaceans—can easily be transformed into a viable building material for basic tools and habitats. This would require minimal energy and no need for transporting specialized equipment. The scientists described their experiments in a recent paper published in the journal PLOS ONE.

“The technology was originally developed to create circular ecosystems in urban environments,” said co-author Javier Fernandez. “But due to its efficiency, it is also the most efficient and scalable method to produce materials in a closed artificial ecosystem in the extremely scarce environment of a lifeless planet or satellite.”

As we previously reported, NASA has announced an ambitious plan to return American astronauts to the Moon and establish a permanent base there, with an eye toward eventually placing astronauts on Mars. Materials science will be crucial to the Artemis Moon Program’s success, particularly when it comes to the materials needed to construct a viable lunar (or Martian) base. Concrete, for instance, requires a substantial amount of added water in order to be usable in situ, and there is a pronounced short supply of water on both the Moon and Mars. And transport costs would be prohibitively high. NASA estimates that it costs around $10,000 to transport just one pound of material into orbit.

So there has been much attention on the possibility of using existing materials on the Moon itself to construct a lunar base. Past proposals have called for 3D-printing with Sorel cement, which requires significant amounts of chemicals and water (consumables), and a rocklike material that would require both water and phosphoric acid as a liquid binder. And back in March, a paper by an international team of scientists suggested that astronauts setting up a base on the Moon could use the urea in their urine as a plasticizer to create a concrete-like building material out of lunar soil.

As with the Moon, any plan to set up a habitable base on Mars must employ manufacturing technologies that make use of the red planet’s regolith. But the authors of the current paper point out that most terrestrial manufacturing strategies that could fit the bill typically require specialized equipment and a hefty amount of energy. However, “Nature presents successful strategies of life adapting to harsh environments,” the authors wrote. “In biological organisms, rigid structures are formed by integrating inorganic filler proceed from the environment at a low energy cost (e.g., calcium carbonate) and incorporated into an organic matrix (e.g., chitin) produced at a relatively high metabolic cost.” 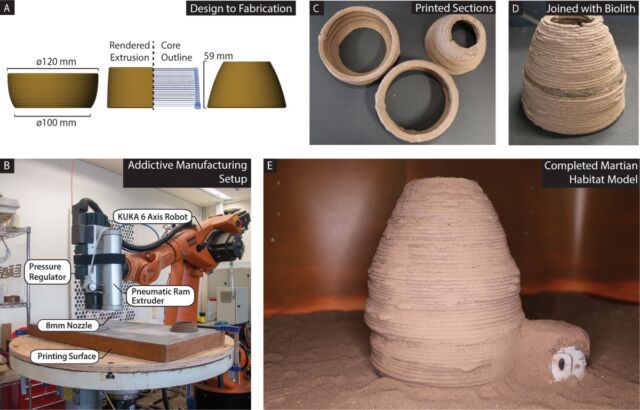 Fernandez and his colleagues maintain that chitin is likely to be part of any planned artificial ecosystem because it is so plentiful in nature. It’s the primary component of fish scales and fungal cell walls, for example, as well as the exoskeletons of crustaceans and insects. In fact, insects have already been targeted as a key source of protein for a possible Martian base. And since the chitin component of insects has limited nutritional value for humans, extracting it to make building materials “does not hamper or compete with the food supply,” the authors wrote. “Rather, it is a byproduct of it.”

For their experiments, the researchers relied on fairly simple chemistry. They took chitosan derived from shrimp, dissolved it in acetic acid—a common byproduct of both aerobic and anaerobic fermentation—and combined it with a mineral equivalent to Martian soil to create their chitinous building material. They tested its properties by fashioning various objects out of it, most notably a functional wrench, which they tested by tightening a hexagonal bolt. While acknowledging that this would be unlikely to replace metallic tools for certain critical space applications, it proved hardy enough to sustain sufficient torque for small daily tasks.

Next, the team tried molding the material in various geometries to study its potential as a building material via additive manufacturing, ranging from cylinders and cubes to objects with both rounded and angular shapes—including a little humanoid Martian figure. The scientists also demonstrated that the biolith could be used as makeshift mortar to effectively plug a small hole in a pipe. The pipe subsequently went several weeks without leakage. Finally, they built a full 3D-printed model of one possible design for a Martian habitat; it took just under two hours to complete. The researchers concluded that their results demonstrated the feasibility of such “closed-loop, zero-waste” solutions on Mars.

“Bioinspired manufacturing and sustainable materials are not a substituting technology for synthetic polymers, but an enabling technology defining a new paradigm in manufacturing, and allowing to do things that are unachievable by the synthetic counterparts,” said Fernandez. “We have demonstrated that they are key not only for our sustainability on Earth but also for one of the next biggest achievements of humanity: our transformation into an interplanetary species.”