While I have been testing a pre-release Xbox Series X console for nearly a month, ahead of its November 10 launch, I have had very few new games to test on it. Most of my effort has revolved around its massive backwards-compatible feature set—as seen in a very long feature about how older games benefit from newer hardware.

Today, for the first time, I’m allowed to lift the curtain on a game made for Xbox Series consoles: DiRT 5, the latest drift-heavy racing game from Codemasters. What’s more, it is the first game I’ve ever tested for a bespoke game console with frame rates up to 120fps. That’s a substantial increase from the 60fps max of past console generations (and a big rally-car leap above the 30fps cap you typically see on current-gen games).

I want to be clear: DiRT 5 is not the best foot forward for Xbox Series X, and I’m not entirely sure it’s representative of the console’s next-gen promise. I urge you to keep an eye out for more next-gen game impressions before loading ammunition into your preferred “console war” cannon. But DiRT 5‘s first taste of 120Hz racing on a console, and what it takes to get there, is fascinating enough to merit an asterisk-covered preview.

The first major issue with DiRT 5 is how seemingly current-gen the whole game looks. When I think about the promise of Xbox Series or PlayStation 5, I look back at bullet-point lists in the recent hype cycle. Insane loading times. Virtual worlds that can stretch much further into the distance, owing to a faster I/O architecture. Larger crowds of people and vehicles, powered by a substantial boost to CPU specs. Incredible texture fidelity on people and terrain. Maybe some ray tracing (though, let’s be real, we’re still waiting on anything with ray tracing enabled to exceed 30fps on one of this year’s consoles).

DiRT 5 fails to meet pretty much all of those bullet points. Generally, it looks like a current-gen console game that would have struggled to hit a smooth 60fps on Xbox One X or PS4 Pro, especially at resolutions higher than 1080p. I’ve seen crazier amounts of distant terrain and geometry in 60fps racers like OnRush, and I’ve seen more convincing foliage and weather effects in Forza Horizon 4 (which maxed at 30fps when it launched on Xbox One). Like other mainline entries in the series, this DiRT sequel sticks to formal racetracks with a mix of concrete and unfinished roads—not open-world romps. It looks so familiar, in fact, that if I told you all of the images in this article were from 2017’s DiRT 4, you might believe me. (To be clear, all images in this article are from DiRT 5 on Xbox Series X.)

Even at their most ambitious, DiRT 5‘s race tracks emphasize the kinds of foliage designs and rendering distances you’ve seen before. In particular, camera angles emphasize limited views as you careen toward your next drift-filled turn, as opposed to eye-popping zips through massive valleys. (The few times the game has you drive off massive ramps, they’re not sold with a sense of scale; you simply see a wide-open, low-resolution skybox behind a straight chunk of road to land on.) Also, for a game with so many puddles, the reflections in this game use a particularly inaccurate-looking screen-space option—and, again, I didn’t expect ray tracing, but even cube maps would’ve looked better than this.

Worst of all is the game’s terrain. Despite so much emphasis on driving over puddles, mud, and snow, DiRT 5 includes zero terrain deformation systems. You won’t see mud pile up in tread-filled chunks, nor clear tire trails through dusty roads, while the meek trail marks through snowy terrain auto-vanish after about 10 yards. I’m not saying the game needs such computationally expensive systems, nor even a cleverly coded facsimile that applies simple texture tricks over messy roads. But in DiRT 5, all of the splashes and explosions of mud and dust aren’t met by a road that matches, and it’s hard not to notice.

DiRT 5 includes three visual modes as options: “resolution,” “frame rate,” and “120 Hz.” And all of the above complaints are compounded as you take each step toward lower detail.

In “resolution” mode, the game runs in an apparently uncapped frame rate; this bounces between 30fps and 60fps, which averages out to roughly 40fps. This mode’s dynamic resolution maxes out near 2160p and falls as low as an apparent 1440p. (Compared to Xbox One’s heavily aliased DiRT 4, the jump in resolution this time around is very appreciated.) Drop to DiRT 5‘s middle “frame rate” setting, and you’ll see a mild hit to texture pop-in on the ground ahead of you, along with a noticeable hit to shadow pop-in in the near distance. Settings are otherwise mostly left intact, other than a dynamic resolution that scales down lower, while the frame rate gets close to, but doesn’t lock to, 60fps. 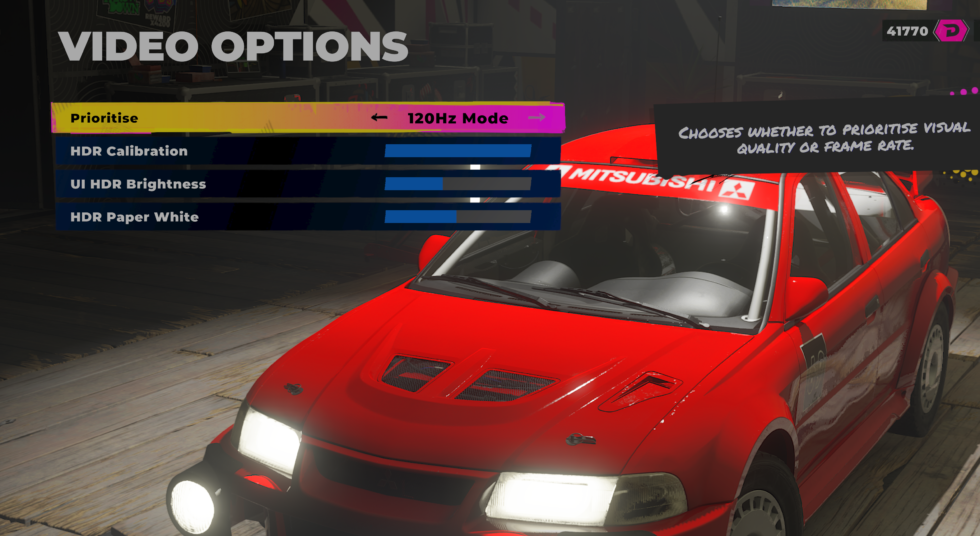 The visual quality continues to dwindle when you take things all the way to 120fps mode, at which point major visual features disappear. The worst is an aggressive level-of-detail (LoD) downgrade for any elements near and above the race track. Mountains start to look less like mountains and more like college-grade assets purchased directly from the Unity development store. Tree-lined hillsides lose some trees. Cars lose polygonal detail and flourishes like grills. And the crowds of cheering fans sitting or standing by the road all disappear, even though the game’s audio doesn’t reflect this reality. (If you think fake crowds in pandemic sports games are bad enough, you ain’t seen nothin’.)

Additionally, pop-in issues become much more apparent for both textures and shadows, and ambient occlusion is axed across the board. Those distant trees look weirder without a coat of accurate shadows, while ground textures look decidedly flat in this mode. Plus, its dynamic resolution appears to max out near the 1080p mark, dropping further during busy scenes.

Hugging the track with many more frames

And yet! Unlike the other two modes listed here, 120fps mode only suffers from a drop from its advertised frame rate at the outset of certain races, when every car is kicking up particle clouds of dirt or water. Other than those frame rate stutters, the mode does a really good job of locking to its target frame rate.

That’s when we start cooking with gasoline.

DiRT 5 is at its best when its race tracks eschew boring, wide-open straightaways and focus on skin-of-your-teeth maneuvers. Hilly corkscrew turns, aggressive zig-zags, and downhill dives into blind corners feel particularly good when the team at Codemasters lets you rip them open at 120fps, and these zanier courses benefit from clever art direction (particularly on a series of courses near Christ the Redeemer in Brazil) and weather effects that explode with HDR-10 effects. A given track might transform from cloudy to rainy to a direct-in-your-eyes sunset, and the HDR grading in this one is truly something to behold, especially when rain droplets or celebratory confetti shine in the gleam of your headlights.

Yes, but unfortunately, DiRT 5 isn’t properly operating with Xbox Series X’s VRR system as of press time—at least, not as connected to my LG CX OLED panel, updated with new firmware as of last week—and Microsoft confirmed this is a known issue in the console’s pre-release testing period. This is a significant asterisk that we hope is resolved in time for the console’s November retail launch, and we’ll keep you posted on that front.

Major video-sharing platforms in the year 2020 severely lack 120fps options, so there’s no way I can show you the 120fps difference when careening through DiRT 5‘s dusty, particle-filled tracks. Some people may even insist they can’t tell the difference between 60fps and anything higher. I’ll simply insist that roughly 1/3 of its courses send me with a blistering sensation, where I feel like I’m bolted into the very car I’m virtually driving with the extra sense of responsiveness that 120fps affords me. Plus, the smooth refresh rate makes it easier for a driving-Philistine such as myself, who normally pulls the camera out to an angle above my car, to place the camera into a tight spot just above my car’s hood.

These compliments double up when you get into DiRT 5‘s “Playground” mode, which lets you build and share your own race tracks (including “gymkhana” score challenges) using generic course-builder parts. These all take place in a generic desert backdrop, and they match well with Codemasters’ impressive take on rally-driving suspension. In these tracks, it’s just your car, the concrete, and some incredibly tight turns and twists. Rip into these with the responsiveness of a 120fps refresh, and you likely won’t have the bandwidth to notice if any shadows or textures take too long to pop into view.

We’re major proponents of quality split-screen gaming at Ars Technica, and DiRT 5 on Xbox Series X comes with one incredible bonus: a split-screen racing mode that maintains frame rates exceeding 60fps, without shrinking the pixel resolution. These don’t quite lock to 120fps, but 90-100fps for a shared race is more than acceptable for us (and would make 14-year-old Sam mess his drawers).

I conducted my tests with Xbox Series X’s packed-in controller, not a racing wheel, though in good news for enthusiasts, any wheels compatible with Xbox One will work on the newer console. But while DiRT 4 offered players a choice between “fun” and “realistic” handling models, DiRT 5 does not—and its default hews heavily towards arcade-styled racing. The result sometimes feels like a spinoff of Namco’s Ridge Racer arcade series, but when it’s just you and one or two other cars jostling for precious position around a brutal corner, DiRT 5 continues to feel springy and responsive—and feels even better when set to the game’s highest frame rate mode.

Also, if your gaming TV or panel of choice doesn’t have an HDMI 2.1 connection, then that 120Hz mode is likely off the table for you—at least on consoles like Xbox Series X. (Related: Ars Technica’s HDMI 2.1 guide is coming soon.) That’s the point where I direct you to the game’s upcoming PC version, which can get you higher frame rates via connections like DisplayPort… but if you don’t already own a gaming-grade PC, I don’t know of a $500 PC on the market, complete with a 1TB NVMe 4.0 storage drive, that will get you up to 120fps on a racer like DiRT 5.

I imagine what I’m saying here about DiRT 5 will apply to most so-called next-gen games for the next few months. Maybe a game is launching simultaneously on older and newer consoles. Or maybe it has a PC version, so it can’t home in specifically on the incredible data-processing pipeline of either PS5 or Xbox Series. Whatever the case may be, the very near future of gaming will be less about insane technological leaps and more about taking a “next-gen difference” whenever we can get it.

In DiRT 5‘s case, at least, that difference feels a lot better than it looks. But it’s also making us wonder: will developers struggle to get the most out of Xbox Series X’s differences while designing for multiple hardware generations? Will other developers come up with more clever ideas, or at least less aggressive downgrades, to reach that blazing-fast 120fps rate? And will VRR get its act together on Xbox Series X in time to smooth the inevitable frame rate lapses along the way? We don’t have those answers yet, obviously, but we’ll continue asking them while covering both sides of 2020’s next-gen frenzy.

Misinformation is spread as fast as coronavirus. It will ‘take a village’ to fight it