Doctors still evasive on Trump’s health as he leaves hospital 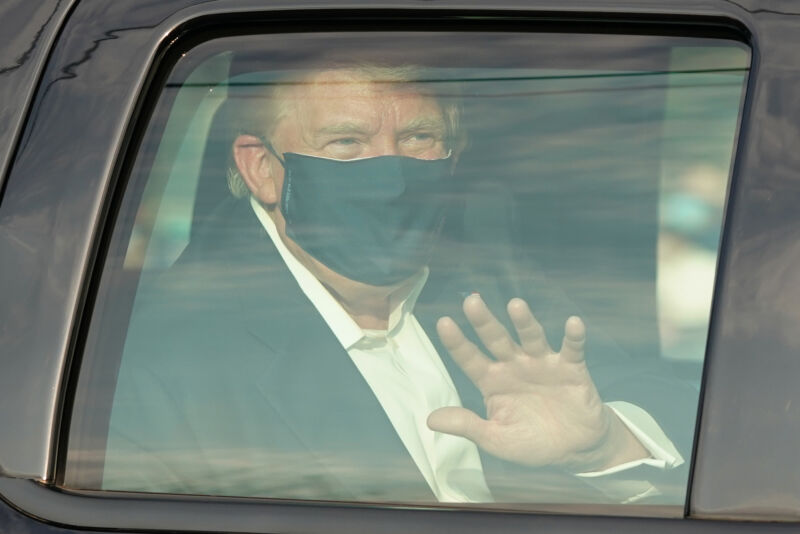 Enlarge / A car with US President Trump drives past supporters in a motorcade outside of Walter Reed Medical Center in Bethesda, Maryland on October 4, 2020.
Getty | Alex Edelman

After being hospitalized several days for a coronavirus infection and receiving two experimental treatments, supplemental oxygen, and a steroid drug used only for the most severe COVID-19 cases, President Donald Trump on Monday tweeted that he would be leaving Walter Reed National Military Medical Center and returning to the White House.

In a press briefing Monday afternoon, White House physician Sean Conley readily acknowledged that Trump has not yet reached a critical period of his infection—roughly, days seven to 10 after symptoms—in which COVID-19 patients’ conditions can quickly and dramatically deteriorate from overzealous immune responses. Trump is believed to be at around day six of his symptomatic infection.

“Though he may not entirely be out of the woods yet,” Trump’s condition has improved and his medical team cleared him to return to the White House, “where he’ll be surrounded by world-class medical care, 24/7,” Conley explained.

Health experts were quickly flabbergasted by the decision to discharge Trump from Walter Reed, where he was initially said to have been admitted for monitoring purposes and out of an abundance of caution. Since then, Conley has revealed that Trump has experienced significant COVID-19 symptoms, including low blood oxygen levels. He has also been treated with dexamethasone, an anti-inflammatory steroid drug that is recommended only for severe cases COVID-19 cases that require mechanical ventilation or supplemental oxygen, according to the National Institutes of Health and the World Health Organization.

“So ‘abundance of caution’ has been replaced with ‘throw caution to the wind, and put up your middle finger while you’re at it,’” Esther Choo, a physician and professor of emergency medicine at Oregon Health & Science University, wrote in a tweet.

Experts were also horrified by the rest of Trump’s Monday afternoon tweet, in which he urged Americans: “Don’t be afraid of Covid. Don’t let it dominate your life.”

As of the time of his tweet, the country was nearing a tally of 7.5 million cases and 210,000 lives lost to the pandemic coronavirus, which has caused a global public health crisis of historic proportions.

Trump’s surprising hospital discharge is just the latest drama around his condition and treatment, which have been shrouded in contradictions and obfuscations since Trump revealed his infection in the wee hours of last Friday morning.

The country first learned that Trump was infected with the novel coronavirus, SARS-CoV-2, from one of his tweets, in which he said that he and the first lady had tested positive Thursday evening. However, that timeline was called into question after two of the president’s doctors said on Saturday that he had tested positive on Wednesday and began an experimental treatment on Thursday.

Conley—one of the doctors who suggested the alternate timeline—quickly backtracked on his statement, saying it was a mistake and that Trump first tested positive Thursday. However, media reports quoting sources close to the president have said Trump was experiencing symptoms Wednesday and had tested positive earlier than he initially said.

In addition to the murky timeline, Conley has been evasive on questions about Trump’s condition. For instance, on Saturday he repeatedly tried to dodge questions about whether Trump had needed supplemental oxygen and instead tried to paint a rosy picture. But, on Sunday, he admitted that the president did, in fact, receive supplemental oxygen. He explained his obfuscation by saying he “was trying to reflect the upbeat attitude that the team, the president, that his course of illness, has had.”

Conley has also declined to provide information on whether Trump’s lung scans have shown damage from COVID-19 and how high his fever had been. He also has repeatedly dodged questions about when Trump last tested negative for the coronavirus, furthering speculation about the timeline of his illness. Today, Monday, Conley also declined to answer questions about how Trump will keep from spreading the infection further in the White House, once he is released from the hospital.

Amid the unanswered questions, Conley has offered a confusing picture of the president’s condition, saying he’s “doing very well” and is in good spirits while also revealing that Trump was quickly started on courses of two experimental treatments—an experimental cocktail of monoclonal antibodies, and the antiviral, Remdesivir. Both are still in clinical trials, but early data has suggested that they both may hasten recovery from a coronavirus infection.

On Sunday, Conley revealed Trump had experienced another drop in his blood oxygen levels on Saturday and had been given dexamethasone—usually reserved for only severe and critical COVID-19 patients. But, later that day, Trump was allowed to leave the hospital to go for a short car ride past supporters, who were stationed outside the hospital. Health experts and Secret Service agents were aghast at the ride, which they described as “joy ride” and publicity stunt that endangered agents in the car with him.

One aspect of Trump’s infection that is not confusing is how he came to contract the virus. Trump and his administration have consistently downplayed the pandemic and have not taken public health measures, such as distancing and mask-wearing, seriously. In the wake of Trump’s infection, an ever-growing cluster of cases linked the White House has come to light.

The outbreak in the White House makes Trump’s Monday tweet even more stunning. Despite his serious condition, use of experimental drugs, and extraordinary access to top-notch medical care, Trump continued to downplay the virus and its effects. He ended his tweet by saying: “I feel better than I did 20 years ago!” But, experts note, that feeling may simply be a side effect of the powerful steroid he’s on, which commonly causes mania.