Doomed Philae lander accidentally did a science by denting the comet 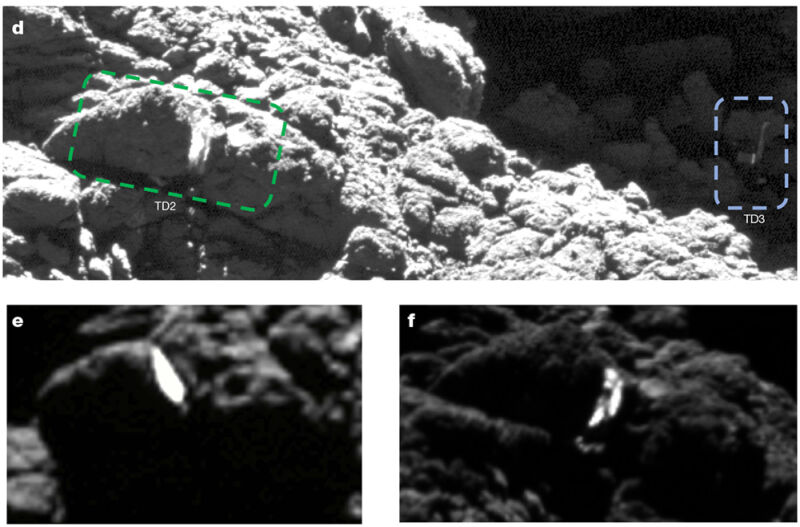 Enlarge / The close-ups highlight the bright ice exposed in the boulders when Philae struck them during its second touchdown (green box above).
O’Rourke et al./Nature

The Rosetta mission’s attempt to drop the Philae lander on a comet in 2014 didn’t go according to plan. The harpoon mechanism meant to stick Philae to terra-not-quite-firma didn’t work, and poor Philae ended up bouncing around and landing under a dark cliff overhang, unable to deploy its solar panels and complete its tasks. But let it not be said that Philae failed to leave its mark. Because it did. Quite literally.

To extract value from Philae’s accidental adventure, researchers have worked hard to identify the spots where the craft impacted the surface of the comet. This required painstaking analysis of Philae’s motion sensors to reconstruct its trajectory, along with a terrifically complex game of “one of these things is not like the others” played with before-and-after images of the comet’s jumbled surface.

The site of the initial bounce was easy enough to find, but the path from there to its resting place was another story. A new study led by the European Space Agency’s Laurence O’Rourke reveals another spot where Philae dented comet 67P. And the size of that dent actually tells us something remarkable about what comets are like.

Researchers eventually found a spot they dubbed “skull-top ridge” where a pair of boulders separated by a crevice appeared to have met Philae. After the landing, a bright spot appeared in that crevice, as if surface dust had been removed to expose water ice in the boulder. And indeed, spectral data from imagery confirms that the bright spot is largely water ice. While water ice makes up a substantial portion of comets—which are often somewhat rudely referred to as “dirty snowballs”—a comet’s surface is composed of a layer of dust left behind as sunlight drives off the outermost ice, so actually seeing ice there is telling.

A simple animation to show how the team thinks Philae interacted with the pair of boulders.

Philae’s initial touchdown location was in a flat spot likely covered by a thick layer of that dust. Its encounter with this boulder represents an interaction with something more similar to the comet’s interior.

The team estimates the depth of the dent it left behind at about 25 centimeters. Using the recorded velocity of the 100-kilogram craft, this allowed them to calculate the boulder’s sturdiness—or lack thereof, as it turns out. They found that the boulder was actually about as soft as fluffy snow on Earth.

This illustrates something that Rosetta successfully measured: the comet is extremely porous. The high water ice and CO2 ice content might make you think the comet is a hard, frozen block, but around 75 percent of its volume is void space in between grains of ice and dust. Without strong gravity to pull things together, comets just aren’t that dense.

This isn’t the first estimate of the comet’s material strength to come out of the Philae landing attempt. The estimate based on Philae’s initial touchdown crater was significantly sturdier, more similar to the regolith of our Moon, but that was likely the thick dust layer. A drilling experiment performed by Philae returned a nearly rock-like stretch estimate, far surpassing any others. But it’s not clear what material that could have been drilling, or if it was even accurate.

But as University of Arizona researcher Erik Asphaug writes in a summary accompanying the new study in the journal Nature, this all highlights the difficulty of missions targeting comets. A sample collection mission, for example, would have to think carefully about what to sample and how that material might behave.

“This is not the first misadventure to occur on the surface of a small planetary body, nor will it be the last,” Asphaug writes. “Unfortunately, the findings also suggest that the best places to sample comets will not be the flat plains, but along the newly exposed ridges, cliffs and boulder piles, which are more difficult to land on.”

And landing on a flat plain proved difficult enough.