Engineering a battery fast enough to make recharging like refueling 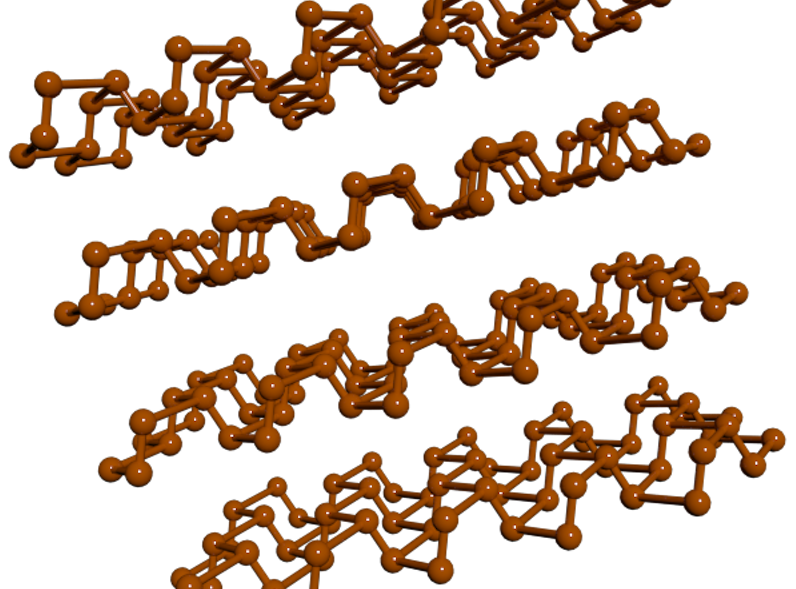 Right now, electric vehicles are limited by the range that their batteries allow. That’s because recharging the vehicles, even under ideal situations, can’t be done as quickly as refueling an internal combustion vehicle. So far, most of the effort on extending the range has been focused on increasing a battery’s capacity. But it could be just as effective to create a battery that can charge much more quickly, making a recharge as fast and simple as filling your tank.

There are no shortage of ideas about how this might be arranged, but a paper published earlier this week in Science suggests an unusual way that it might be accomplished: using a material called black phosphorus, which forms atom-thick sheets with lithium-sized channels in it. On its own, black phosphorus isn’t a great material for batteries, but a Chinese-US team has figured out how to manipulate it so it works much better. Even if black phosphorus doesn’t end up working out as a battery material, the paper provides some insight into the logic and process of developing batteries.

So, what is black phosphorus? The easiest way to understand it is by comparisons to graphite, a material that’s already in use as an electrode for lithium-ion batteries. Graphite is a form of carbon that’s just a large collection of graphene sheets layered on top of each other. Graphene, in turn, is a sheet formed by an enormous molecule formed by carbon atoms bonded to each other, with the carbons arranged in a hexagonal pattern. In the same way, black phosphorus is composed of many layered sheets of an atom-thick material called phosphorene.

But there are key differences between the materials. To begin with, phosphorus is a larger atom with more electrons than carbon, and so it can interact with more lithium atoms, an essential feature for battery electrodes. The other key difference is that the bonds formed by carbon atoms ensure that graphene is essentially flat, no thicker than the atoms of carbon it’s formed from. The phosphorene sheets, as you can see above, are most clearly not flat. Neighboring atoms are bound at angles that give the sheet a series of ridges or channels.

It’s that feature that drew the researchers’ interest, since those angles form an avenue to get lithium ions into and out of the material quickly. And, because each phosphorus atom can interact with multiple lithium ions, we only know of two materials with higher theoretical electrode capacities—one of them being lithium metal itself. Finally, black phosphorus conducts electricity well, an important feature for a battery electrode.

So, why isn’t everyone already using black phosphorus? Well, mostly because it doesn’t work. Like other electrode materials, the black phosphorus expands as lithium ions get packed in, increasing the risk of a structural failure during charge/discharge cycles. And at the edges of sheets, chemical bonds can form between the different layers, sealing off some of the channels. To get it to work as a battery material, these issues need to be fixed.

The fix is in

And that’s exactly what this paper describes. To deal with the chemical bonds formed at the edge of phosphorene sheets, they mixed black phosphorus with graphite and ground the two up, allowing the atoms at the edge of the phosphorene sheet to form bonds with carbon atoms. While the graphite isn’t as effective as a carbon storage medium, it’s still good enough to use in batteries. And, by limiting the amount of graphite to about 15 percent of the total material, they ensured that the black phosphorus handled the majority of the lithium storage.

To get this material to work with a solid electrolyte, the researchers coated it with a thin polymer gel infused with liquid electrolyte. This ensured that, even if the electrode shifted around due to the large influx of lithium ions, it would still be able to interact with the solid electrolyte. When they examined the material after cycling it in a battery, they also found out that it helped exclude chemicals formed by the breakdown of other battery materials, which helped boost the durability. After 2,000 cycles, the electrode with this polymer coating had a capacity 10 times larger than the same material without it.

But the key question is whether the material allows a fast charge, which was the whole point of this exercise. Current lithium batteries manage a storage density of about 500 milliamp-hours per gram, but they charge very slowly. To charge a battery at times competitive with filling a gas tank, the authors estimate they need a material that can reach similar levels of storage while handling a charging current of over five Amps per gram.

The new material has some pretty impressive stats. When charged at a rate similar to the one used for a typical lithium-ion battery, it had about three times the storage density of an existing lithium battery. When charged at a rate similar to what’s needed for their fast-charge target, the charge density was still nearly 800 mA-hr/g, leaving it ahead of a lithium battery. It could even handle rates of charge over double that without a large decrease in capacity. And, critically, these numbers came after 2,000 charge/discharge cycles, indicating the battery is quite durable.

These are just the performance of a single electrode and not an entire battery. But the team put one of those together too, and its performance was similar to that of the electrode alone.

There are plenty of reasons that technology like this doesn’t ultimately make it to market, from ease of manufacturing to poor integration with the other components needed to make a commercially viable product. But this is a case in which a material had already been identified as promising, but just wasn’t living up to that potential. And, by demonstrating the issues that limited it could be overcome, the research provides some indication that, even if this particular formulation doesn’t work out, it might be possible to solve the same problems with more manufacturing-friendly materials.