The eurozone has always had a fundamental weakness compared with the U.S. when dealing with financial and economic crises: While its 19 countries share a currency and interest-rate policy, they have no common tax-raising or spending power.

In 2020, the European Union took a big step toward correcting that deficiency by starting to issue bonds on behalf of all member countries, known as common bonds. Beginning in 2021, some common bonds will be repaid through taxes raised by the EU itself.

This fiscal role for the EU is meant to be a one-off, but policy made in the teeth of a crisis—in this case the coronavirus pandemic—often sticks. Many investors and analysts say that a central ability to make taxation and spending decisions at the EU level will become permanent going forward.

Europe’s leaders signed two support packages to help the 19 eurozone members and eight other countries that don’t use the euro cope with the Covid-19 crisis. Almost €40 billion, equivalent to almost $49 billion, of bonds were sold in 2020, and another €210 billion of bonds are expected to be sold in 2021, according to Pictet Wealth Management. Total funding from bond sales for the packages is expected to total €850 billion.

The EU has lent money to member countries before, through the European Financial Stabilisation Mechanism, for example. But this time one of the packages, a €750 billion recovery fund, includes as much as €312.5 billion in grants that member countries won’t have to repay. Instead they will be covered by taxes raised at the EU level.

The recovery fund “is a very good first step towards a central fiscal capacity, towards something bigger,” said

Davide Oneglia,
an economist at TS Lombard, a research firm in London. “There is no way back: These are supposed to be temporary programs, but it’s a difficult policy to backpedal on,” he said.

A lack of a fiscal capability has been a source of instability in the past as each EU country was left to fund its own spending alone, contributing to big differences in borrowing costs between Germany, the Netherlands and France and the more-indebted countries such as Italy, Spain and Greece.

It is a bit like if there were no central treasury in the U.S. and poorer states such as Mississippi and Idaho had to fund themselves entirely without the help of taxpayers in rich states like Massachusetts or New York. 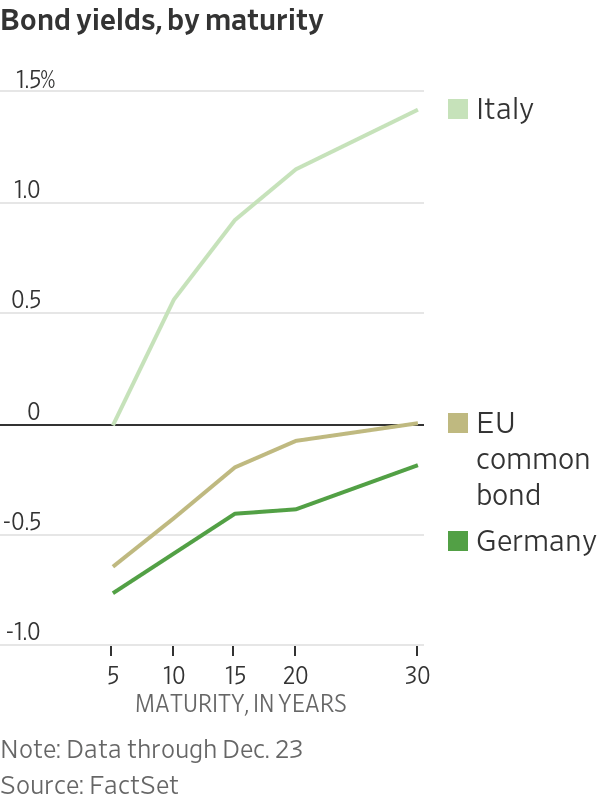 Almost €40 billion in common EU bonds have already been sold since late October under a €100 billion program that was quickly agreed upon to help countries fund efforts to keep people employed during Covid-19 shutdowns. That program, known as Support to mitigate Unemployment Risks in an Emergency, or SURE, lends money to the countries, which must repay the funds from their own tax bases. A benefit is that the common bonds are triple-A rated and cost less than what some weaker countries, such as Italy, have to pay to borrow.

“Demand for the common bonds will remain very strong because the yield offers a premium to German bunds, but for a similar risk,” said

The bigger, €750 billion recovery fund will only start selling debt once all member countries have ratified the EU’s long-term budget. That was only agreed upon in December after Poland and Hungary dropped their objections. The budget is unlikely to be fully ratified until April at the earliest. 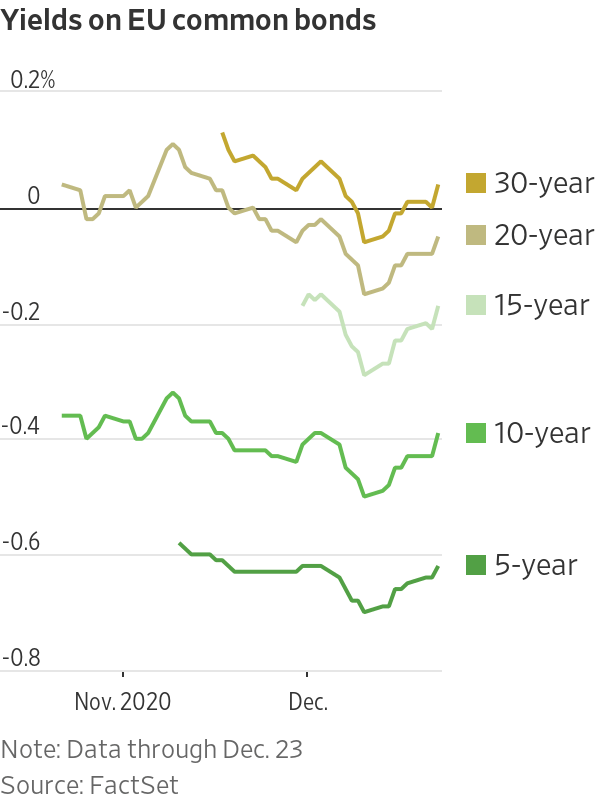 The recovery fund will be split between loans and grants to member states. The grants will be paid for by the EU itself through measures such as a new tax on unrecycled plastic waste and a digital levy. In the future there might also be a financial-transactions tax.

Among the biggest buyers of the SURE bonds have been central banks and other reserve managers eager to increase their holdings of euros. They bought nearly 40% of the 10-year bonds and 30% of the five-year bonds, for instance, according to the European Commission. Ordinary banks have also been big buyers, taking about 20% of each issue on average.

The bonds have faced a crowded market. Issuance in euros from governments and supranational bodies such as the EU has increased in 2020 to more than €630 billion, compared with more than €330 billion in 2019 and slightly less than that in 2018, according to
Deutsche Bank.

One reason why huge government borrowing is being so easily digested by investors is that the European Central Bank is buying a lot of it. ECB purchases are expected to exceed the amount of new borrowing done by eurozone governments. The amount of bonds available for other investors to buy is forecast to shrink by nearly €450 billion, according to
Bank of America.
That would be the biggest contraction since 2016.