Facebook is putting its foot down. On Thursday, the social-media giant banned President Trump from its platforms indefinitely in the wake of Wednesday’s attack on the U.S. Capitol by a pro-Trump mob. Facebook and
Twitter Inc.
initially removed posts by the president Wednesday and temporarily locked the accounts that had helped propel him to power, citing the risk of violence. Facebook shares rose 2.1% Thursday.

Slack had a tense start to the New Year. The workplace messaging platform suffered a widespread service disruption for several hours on Monday, as many employees returned to work for their first full workday of the year. The company said customers experienced problems loading channels and connecting to Slack, a service that many employees depend upon while working from home during the pandemic. On Dec. 14, more than a dozen of Alphabet Inc.’s Google services, including its popular email client Gmail and YouTube, also suffered disruptions, causing issues for workers. Slack shares fell 0.6% Monday. 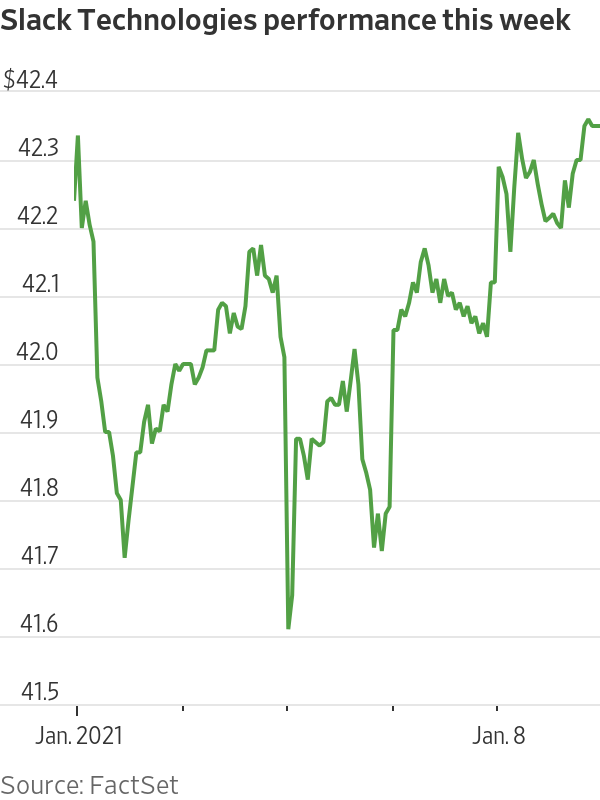 Organized labor now has a beachhead in Silicon Valley. In a rare move inside America’s tech epicenter, a group of employees at Google parent Alphabet announced Monday that they had formed the Alphabet Workers Union. The union, which will be affiliated with Communications Workers of America Local 1400, is the first one open to employees and contractors at any Alphabet company. Around 200 workers are backing the union, a small fraction of the tech company’s more than 132,000 employees. Members said the union’s immediate goal isn’t collective bargaining or formal recognition by Alphabet, but to allow employees to be able to speak out about the company without facing career repercussions. Alphabet shares fell 1.4% Monday. 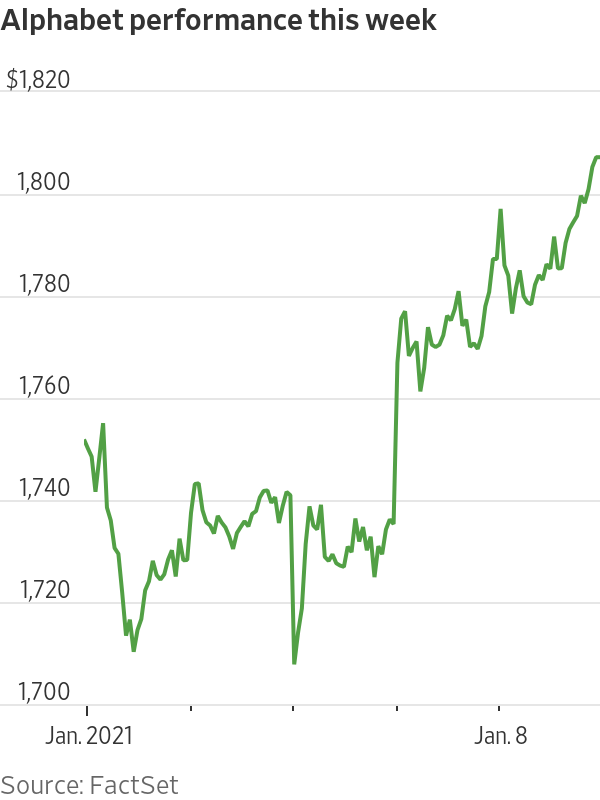 Meet the new richest person in the world:
Elon Musk.

thanks to a meteoric rise in the value of the electric-car maker. His net worth totaled around $195 billion Thursday, up from roughly $30 billion a year ago and exceeding Mr. Bezos’ wealth by about $10 billion, according to the Bloomberg Billionaires Index. Both men have seen the shares in their companies rise sharply during the pandemic, even as the global economy took a hit. The value of Tesla’s shares added 7.9% Thursday, enough for Mr. Musk to overtake Mr. Bezos in the wealth ranking. 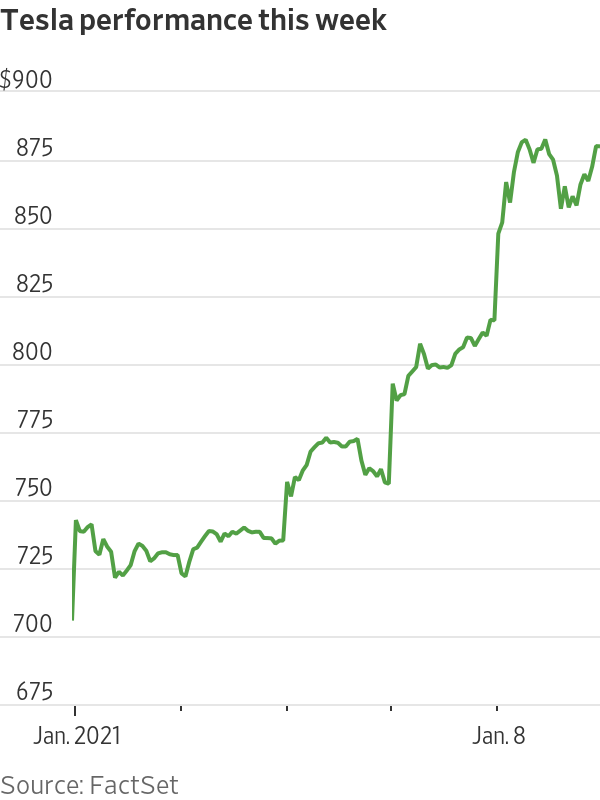 Covid-19 fears didn’t stop Walgreens customers from getting their prescriptions near the end of 2020. The drugstore chain on Thursday reported stronger-than-expected pharmaceutical sales in the quarter ended Nov. 30, even as the pandemic continued to make some consumers hesitant to visit its stores. Pharmacy foot traffic is down as Covid-19 precautions keep seasonal flu cases down and people skip routine medical care and in-person shopping. Walgreens expects any gains it generates from providing Covid-19 vaccinations to likely be offset by the effects of pandemic-related lockdowns and restrictions. The company’s quarterly results also came a day after Walgreens agreed to sell most of its pharmacy wholesale unit for $6.5 billion. Walgreens shares rose 5.2% Thursday. 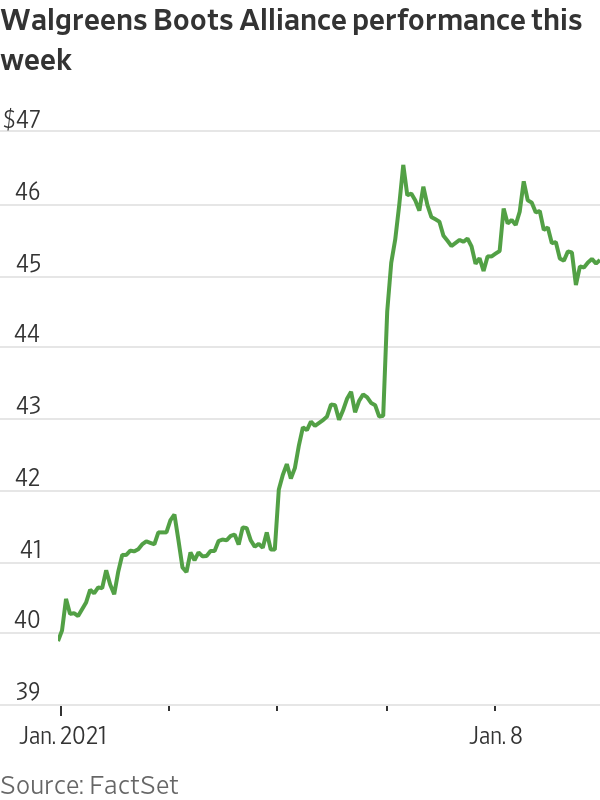 Bed Bath & Beyond’s housecleaning efforts aren’t yet enough to make it shine during the pandemic. On Thursday, the home-goods retailer reported a drop in revenue in the most recent quarter compared with the year-earlier period. The retailer attributed the decline in part to permanent store closures and divestitures of some of its brands, all part of the company’s reorganization that the pandemic accelerated. Also part of the plan is a greater emphasis on digital sales, which surged during the quarter as customers continue to shop from home to prevent the spread of Covid-19. Bed Bath & Beyond shares dropped 10% Thursday. 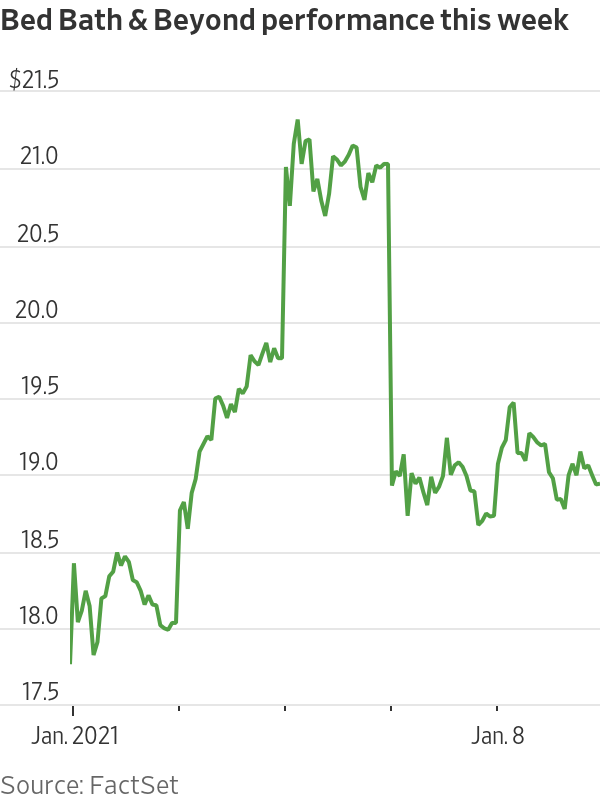 Looking for TrumpStore.com? You’ll get an error message. Online stores run by the Trump Organization and Trump campaign were taken offline on Thursday by the Canadian e-commerce company Shopify after Wednesday’s riot at the U.S. Capitol. The company said that it terminated stores affiliated with President Trump because his comments on Wednesday violated the company’s policy, which prohibits retailers on the platform from promoting or supporting organizations or people that promote violence. The sites sold official Trump branded apparel, “Make America Great Again” hats and other merchandise. Shopify shares gained 6.6% Thursday. 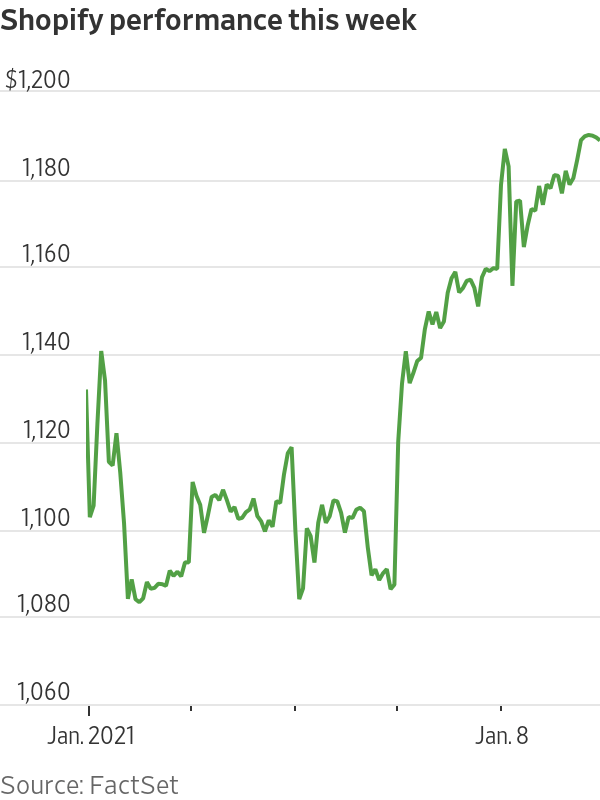 Write to Francesca Fontana at francesca.fontana@wsj.com