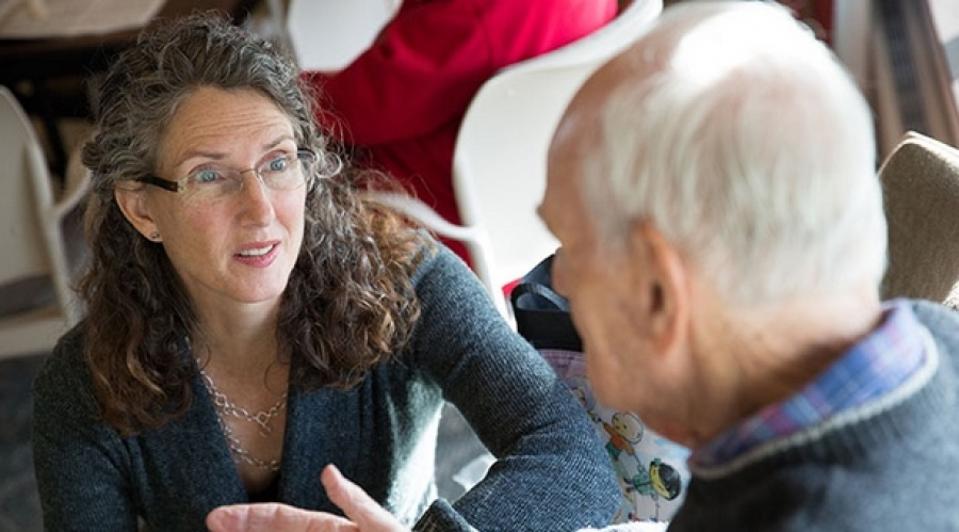 Are you creative? Of course you are, says social entrepreneur Anne Basting, who for three decades has unleashed innate creativity in seniors, their families and caregivers, and nursing home staff. When memory fades, what survives is imagination, a creative force so powerful that it can break isolation, reconfigure relationships, bring joy. Don’t remember my name? No problem, please give me a new one. Just as it redefines communication, imagination also trains everyone in situations of care to discover strength, rather than focus on loss. Anne’s methods are in use in all 50 U.S. states, and twenty countries. She explains the heart of her idea to Ashoka’s Chris Cusano.

Chris Cusano: Dementia is such a complex topic — scientifically, socially, legally, morally, financially. How do you look at the overall challenge?

Anne Basting: In Western culture, our identity depends largely on control of memory and maintaining a linear narrative about who we are, where we come from, and the others in our lives. This is why, when we start finding it difficult to organize our story or express our thoughts, it becomes such an emergency — it translates to a loss of identity. The loss itself becomes the issue, raising questions of legal autonomy and making life choices. Loss of certain faculties gets equated to weakness and dependency, with its negative connotations. And the stigma extends to all seniors.

In essence, what I do is help people normalize these changes and build new ways to express themselves, communicate, and create meaning in life. We can acknowledge that there is loss without hyper-focusing on it. You can go around the loss, then invite the person into a different kind of conversation. And this encounter does not revolve around memory or the continuity of identity. Let’s not forget the strengths that remain, or new ones still to be discovered.

Yet, our medical systems and diagnostic tests focus on identifying and measuring loss. It’s not that useful to families to simply describe the loss—they know already. Those tests should include a section on strengths.

Cusano: What do you mean by, “Forget memory, try imagination”?

Basting: Memory and imagination are inextricably linked in the brain. You can’t actually separate them. Insisting on memory as the sole basis for a relationship can lead to frustration and depression. Imagination is another access point, so we ask people to let go of the expectation that everything will be based on memory. The creative process offers a way around that problem and allows us to set up new relationships and ways of communicating based on the generative process.

More Lockdown Support For U.K. Firms—But Many Self-Employed And Small Businesses Miss Out

Ten Lessons The Year 2020 Is Desperately Trying To Teach Us

There are really simple techniques to invite older people into this mode of communicating. It happens to work with people with dementia and Alzheimer’s, but really there are ways to reach the innate creative capacity of every human being. You’re inviting someone to make meaning, which is a very empowering experience for you and another. Meaninglessness in a care setting affects not only the older person, but also the care provider. If we expect hopelessness in late life, then we program fear and despair into our own future.

Cusano: What happens when creativity comes into the care situation?

Basting: Around 2009, I started training organizations rather than individuals, and it’s been transformative. What would it take to involve a whole institution in this creative process? We did something called the Penelope project, which was a theatrical production put on by elders across all levels of care – from the nursing home to independent living. We took a year to reimagine Homer’s Odyssey from the perspective of Penelope, his wife, who wasn’t on an epic journey – a hero who never left home. That resonates with people under care. And finally we put on the performance, the result of a collaborative effort that included residents, staff, families. Since I am also a professor, I brought in my students, and it became an intergenerational production. The performance was a success, but more important, we started to see other changes.

We saw creativity and improvisation growing in the care system itself. We weren’t guiding this, the staff of the home were, because they had already experienced the improvement brought by creativity. They were finding confidence in their own ability to be flexible, solve problems, and focus on elders’ strengths. Another result is that families found new roles when they visited the care home. The division between activities for residents and family time were broken down.

So, we can see systemic changes, not just impact on individuals.

Cusano: What are the keys to scaling?

Basting: Research is very important. Researchers have published numerous papers on Timeslips’ impact. They’ve documented that creativity can be an effective non-drug intervention; that creative storytelling has many positive outcomes; that seniors re-learn play, which brings many health benefits; that it sensitizes medical students to patients with dementia; nursing home staff develop better attitudes towards residents with dementia.

Another key is something we started out of necessity in 2011. In order to meet requests for training workshops, we created an online version of our training program. Today, we have Timeslips-trained facilitators in all 50 states, and 20 countries. That scaling would have been much more difficult if had relied only on in-person workshops. This turned out to be a low-cost way for individuals to get involved, and those individuals become champions in whatever context they are working.

Cusano: How do we build relationships between younger people and elders with dementia?

Basting: It’s been shown that those who internalize negative ideas about aging live 7.5 fewer years than those with positive attitudes. So, it is a health and longevity issue for everyone, even young people. Some ways of engaging are better than others. There can be a “story-mining” approach that brings young people into nursing homes to have isolated conversations. The creative methods we teach are a better alternative to that.

In general, there’s an age bias in philanthropy. Everyone wants to fund youth innovation. It is seen as the most important investment in the future, with long returns. I would add that if we’re not disrupting ageism, we’re harming young people by shortening their lives. You can do intergenerational work, bringing young and old to create together, and everyone benefits.

Anne Basting is founder of TimeSlips; an Ashoka Fellow; a professor at the University of Wisconsin, Madison; and a MacArthur Fellow. Her latest book is Creative Care: A Revolutionary Approach to Dementia and Elder Care.