GoCycle’s Fun And Sporty GX Ebike Folds Up In Seconds, Goes For Miles

It’s not big, but the GoCycle GX rides like a bigger bike.

Brit ebike company GoCycle makes essentially one kind of bike, but it’s the variations on the theme that make the model line fun and interesting. Following a test of a G3 model in 2019, GoCycle sent me a $3,299 GX model in the recent couple of months to try out for an extended period. 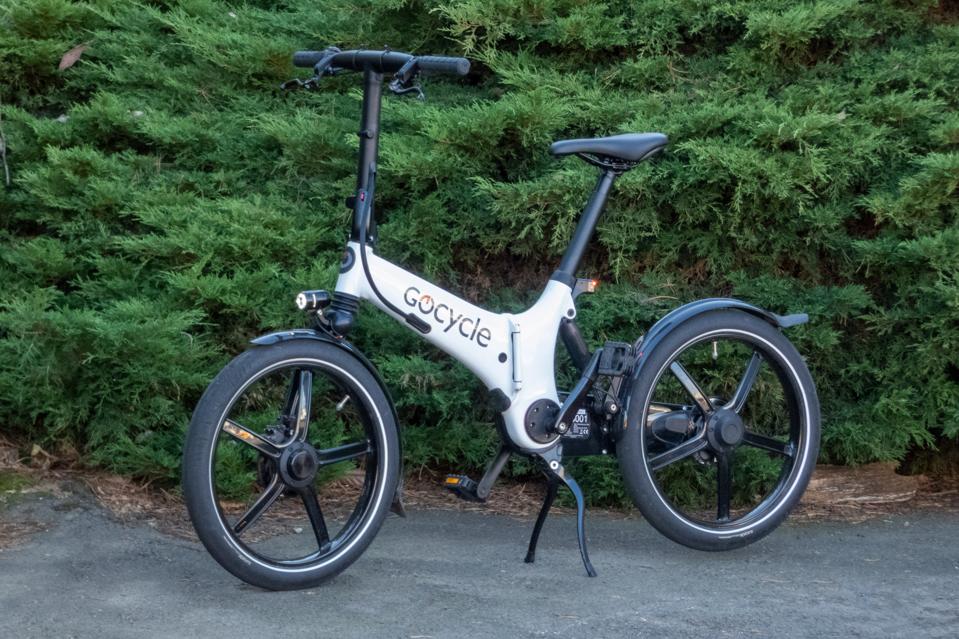 GoCycle brags their specially-made wheels have been speed tested above 100 miles an hour. You won’t … [+] be going that fast.

All of GoCycle’s bikes are based on a common platform consisting of two magnesium monocoque frames joined in ingenious ways, an idea thought up by original designer and McClaren craftsman Richard Thorpe. Physically, the models appear somewhat identical in their primary form factor, but as noted, it’s the differences that set them apart. GoCycle machines also look like nothing else out on the streets, but despite their small stature, they work and ride very much like a regular bicycle. Both wheels mount “single sided” front and rear for quick removal as needed, which looks odd at first but is also nerdy cool. And lest I forget, all GoCycle bikes fold up so you can tuck them under a desk, into a closet or easily take them on public transport – or in your car.

The GX is vastly more simple to fold than the G3 (now called the G3C in the lineup), with quick-release hinges on the body and handlebars and a quick-release seat. GoCycle claims it can be folded up in less than ten seconds, but I’m here to tell them they’re… totally correct: I could do it in about seven seconds after a bit of practice. It’s a brilliant design, and light weight as well, coming in under 39 pounds thanks to that magnesium frame and other weight saving measures. Folded up, the GX is easy to carry, or you can wheel it around like a rollie using the seat as a handle. 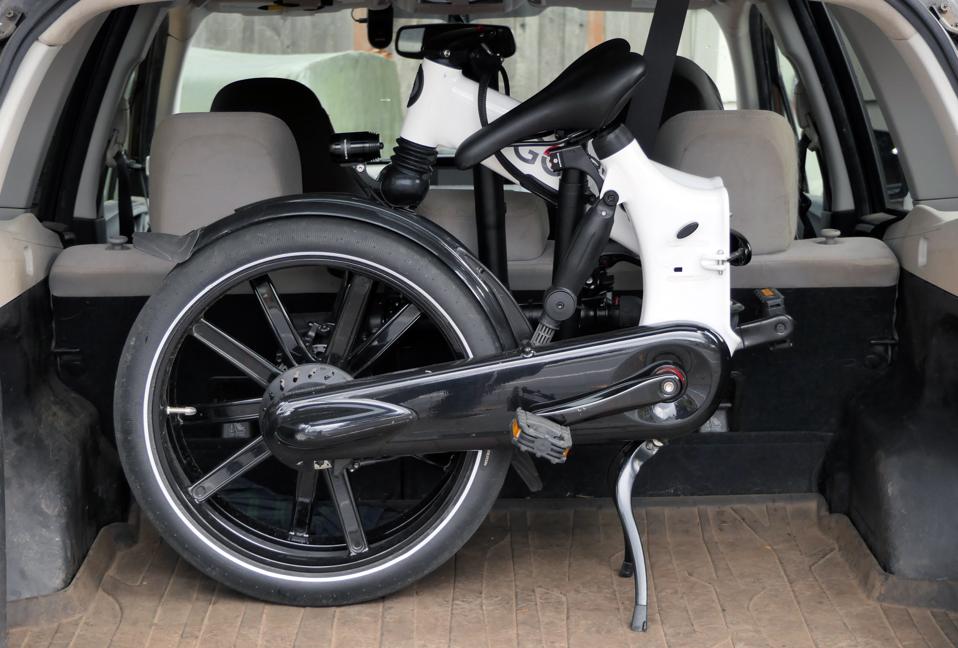 Fold and go: Special quick-release locks and an offset steering stem pivot make it a snap to fold … [+] up. The first time you do it, you’ll understand that this bike was made by smart people.

Bicycle, Moped, Ebike Or Motorcycle? Juiced Bikes’ Hyper-Versatile Hyper Scorpion May Be All Of The Above

You Think Your Job Is Tough: Ford’s Futurist Predicts 7 Trends For 2021

I rode a G3 back in 2019 and the GX is the latest evolution of the design, with a lower price tag and some subtle design and feature changes. For instance: While the G3 featured an automatic-shifting 3-speed power train that could be customized on the GoCycle app, the GX gets by with a simple 3-speed twist grip shifter. In the “ebike” part of the equation, a 500-watt motor in the front wheel kicks in while pedaling, with a top pedal assist speed of 20 miles an hour. That would make this a Class 1 ebike, but wait, what’s this little button under the left grip? Indeed, the GX includes a “throttle” for free-wheeling on motor power alone by way of the small button, making it a Class II bike after all. It’s an on/off throttle rather than a twist grip or thumb lever, but the power comes on smoothly.

The GX features a 22-volt, 13.7 Ah 300Wh battery, good for about 40 miles with pedaling, and less using just the button of course. If you need more range, the GXi, the upgraded version of this bike, has a bigger battery with 50 miles of range along with a numerous other perks, for considerably more dosh. All GoCycle bikes include a bit of rear suspension from a small rear rubber compression shock absorber, and while it may look like they have a bit of front bounce under that gaiter above the wheel, they don’t. A bright LED headlight and rear light are included as standard, but the rear red LED does not function as a brake light. And yes, a bike bell is included as well. 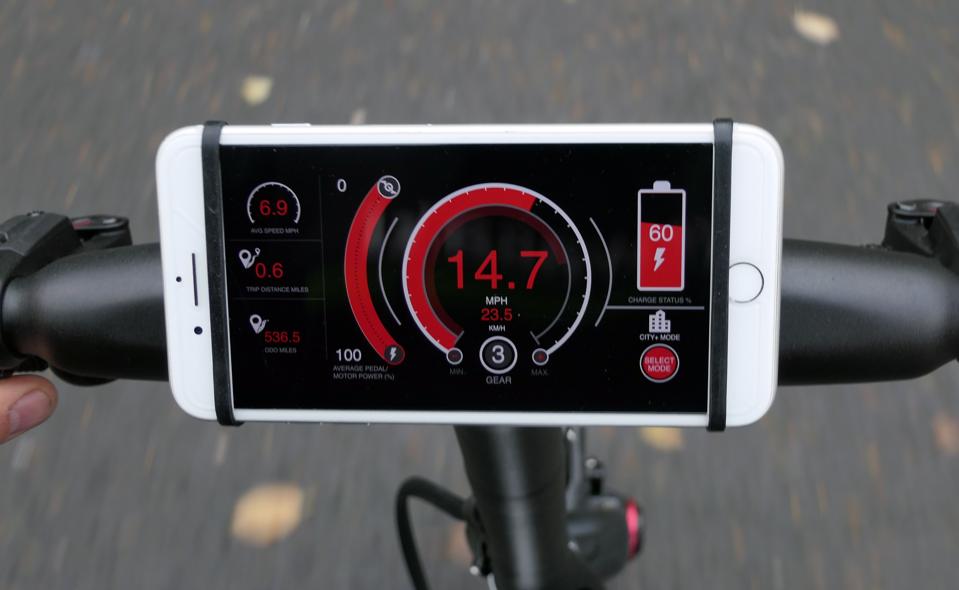 CoCycle’s app brings a wealth of information to the rider, but the elastic straps holding the phone … [+] let it bounce around a bit in the bumps.

A key part of the GoCycle tech experience is its app, which allows for tweaking power output and some other settings, but it can also be ridden just fine app-less. While a five-light LED bar on the center of the GX’s handlebar gives you an idea of your battery charge level at a glance, the app is much more concise. A more substantial included mounting solution would be welcome. The app is well-designed and allows riders to pick ride modes and customize the bike’s power output as well as track numerous other metrics, including speed, distance and power output. With the app connected, phone mounted up and the bike unfolded, it was time to ride. 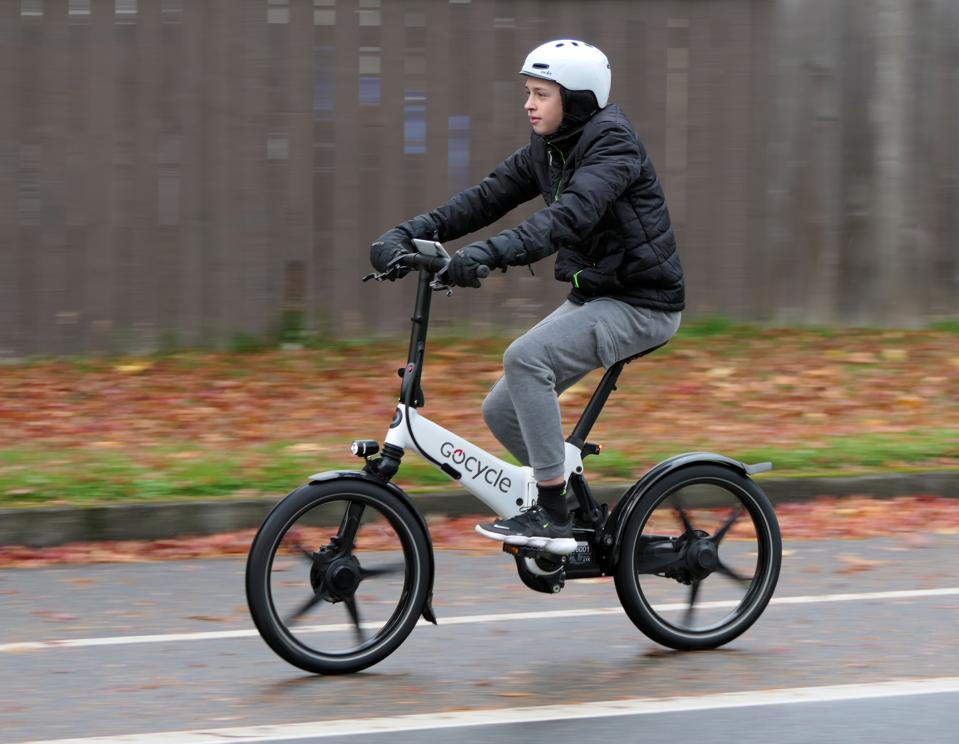 The GX came with lights, fenders, a bike bell and hydraulic disc brakes.

Not much has changed ergonomically since I rode the GoCycle G3, except I was now pedaling around during a pandemic. What a year. But bicycling has long been a socially distant activity, and it was a hoot to zip around Portland on the lightweight GX. Despite the smaller diameter wheels, the GX isn’t twitchy, and it’s easy to pedal. I actually enjoyed having more direct control over the GX’s rear gears than with the GS’s automated (but tunable) drive train, and lest you think a “folding” bike might actually ride like it has a hinge in the middle, the ingenious and very robust GoCycle GX frame locking system makes it every bit as stout as a regular bike. Additionally, the GX features strong fully hydraulic disc brakes, so stopping power was never an issue. The wide but smallish 20-inch tires send a bit more bump action through the frame over bumps, but it was never an issue under way, and the rear short-travel suspension does a good job of smoothing out the ride. My GX also had fenders for no-worry riding in the omnipresent liquid Oregon sunshine.

Hills are the crucible for electric bikes, and since I’m right at the bike’s 220-pound weight limit, it took every last one of the 500 watts in the front hub to get my carcass up a fairly steep grade, but it got there. While pedaling, hitting the magic button on the left grip gives a boost power and of speed up to 20mph, and of course, hills got flattened much faster when I pitched in on the pedals. On the downhill, where the GX could easily swing up past 20 miles an hour, it still felt controlled and stable, with surprising power from the twin hydraulic disc brakes. Mounted to the handlebar, your smartphone plus the app give the GoCycle a highly legible and informative cockpit display, but the two rubbery bands that hold it place unfortunately allow your precious handset to shake and shimmy over the more severe bumps, but at least the phone stayed put on my rides. 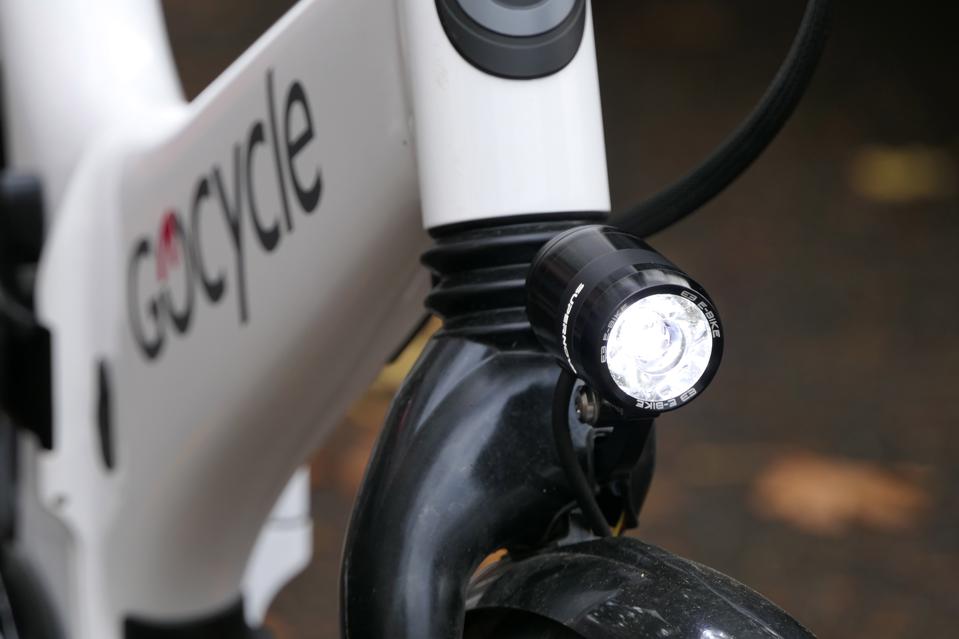 The LED headlight is bright as is the red taillight, but it doesn’t function as brake light.

Since the frame is essentially a step-thru design, it was simple to re-size the GX’s seat for others to ride, including my partner, who is 5-foot-3 on a good day, while I’m 6-foot-1. Our teenage son, who has now passed his mom on the doorway height ledger, also enjoyed the GX.

Finally, the quick-folding ability of the GX is no gimmick. It’s genuinely usable and as I noted, a few rounds of practice meant I could fold up the GX and pop it in my car trunk in literally seconds. For the bike to be this rideable and capable while including this distinctive feature speaks to the amazing design of the GX and of GoCycle bikes overall. 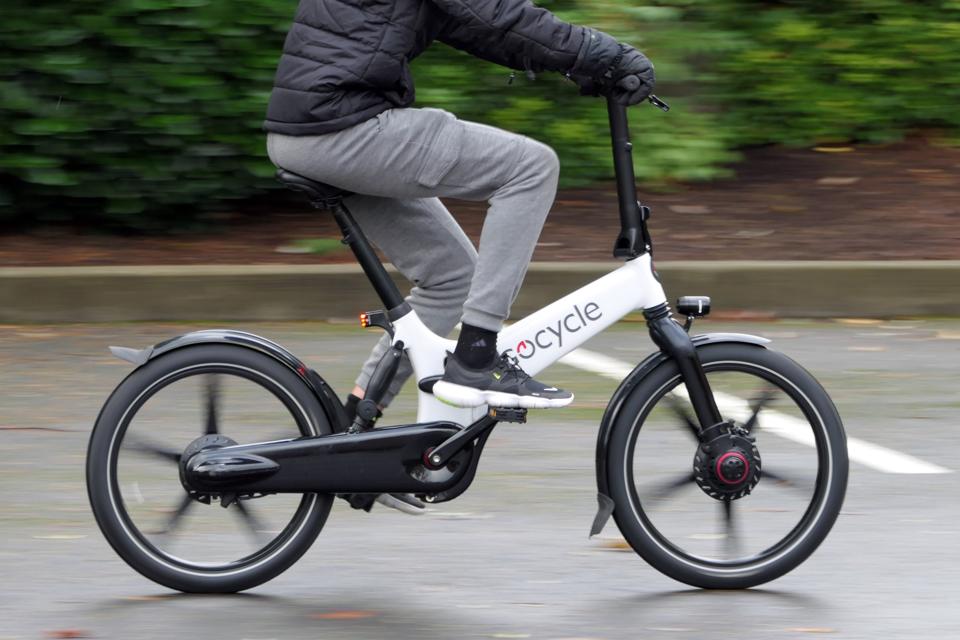 The motor is actually in the front wheel, giving the GoCycle a sort of two-wheel-drive system while … [+] pedaling.

The GX is another fine citybike from GoCycle, but with a lower price tag and thankfully, no quality or performance compromises. As I mentioned, I actually liked the more old-school twist-grip shifter as opposed to the fully automatic system on the G3, and the addition of the throttle button was welcome, especially for my wife, who is recovering from an illness and is not able to bicycle as much as she’d like using her regular bike. The GX’s power, ease of use and simplicity meant we were able to take more rides together than we have been lately – a benefit beyond price or features. Let’s just say a GoCycle machine is high on her wish list.

The light weight, easy-to-use features and trick folding ability make it easy to recommend the GoCycle GX for urban commuters. Yes, it’s more expensive than some bikes but the materials, convenience and performance are worth the price. I’ve ridden all manner of ebikes and own several, but the GoCycle machines stand out in my mind due to their imaginative design. Besides being a solid choice for commuters, anyone looking to get back into biking or just do more riding without needing a complex, large or intimidating ebike would be wise to take a test ride on these unique, approachable machines. They are just plain fun to ride.

• Lightweight, yet solid and stable

• Fits a wide range of riders

• Throttle for free-wheeling up to 20mph

• Unique design might not be everyone’s cup of tea