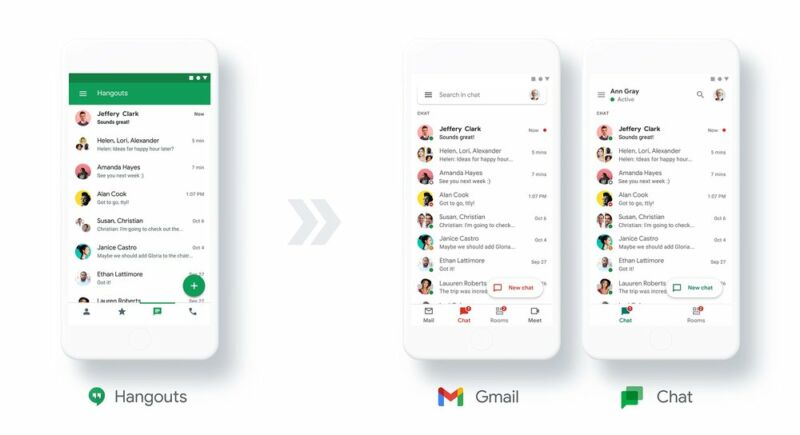 Enlarge / This is happening whether you like it or not.
Google

The company’s latest blog lays out future plans for its suite of messaging services, which includes stripping features out of Google Hangouts as we head toward its eventual demise and the promotion of Google Chat to being the main messaging product.

Since it can be hard to keep track of the dozen-or-so messaging products Google has released over the years, before we get started, here’s a glossary of the Google messaging apps that will be referenced in this article.

OK, now that we’re all on the same page (right? everyone?) the first bit of news in the blog post is that Google Chat will go live for consumer accounts “starting in the first half of 2021.” The service started as a business-focused G Suite app (G Suite is now called “Google Workspace“), so access to Google Chat originally required you to pay for G Suite. But in 2021, it will be free for everyone. Google says it wants a “smooth transition” from Google Hangouts to Chat, and it will “automatically migrate your Hangouts conversations, along with contacts and saved history.”

The slow death of Hangouts

With the rise of Google Chat, Google Hangouts is going to die. Google initially announced this all the way back in 2018, and now we’re getting more details about the service’s slow shutdown and transition plans for the services that rely on it. We’ve already seen Hangouts lose location sharing and SMS support, and in the blog post, Google announced that phone calls, Google Fi support, and Google Voice support will soon be stripped away from the service.

First up is the loss of Google Fi SMS, which starts “in the next few weeks.” Google Fi can use your phone SMS app to send messages, but since it’s a real cell phone service, it could also get SMS messages through Hangouts. Hangouts has apps for Android, a Chrome extension, and two Web access points—Gmail and hangouts.google.com—so it was a super-easy way to use Google Fi. For Google users, it was also the home of their non-SMS messages, so you got everything in one convenient app. While Google Chat is taking over for Hangouts, it’s not picking up this bit of functionality. If you want Google Fi messages, you’ll soon need to use Google Messages, the Android SMS app.

Google Messages only has an Android app and a Web app. The Messages Web app currently works by forwarding data from your phone, so your phone needs to be on for it to work, and you have to log in by scanning a QR code from your phone. Google notes that Fi users will be able to use Web Messages “even when their phone is off,” so it sounds like normal login functionality will finally come to the service.

Google Voice is also losing Hangouts integration this month. Voice has its own phone apps and a Web app, and you’ll soon need to use those.

The death of phone calls in Google Hangouts is apparently because “new telecommunications regulations are being introduced in the EU and US beginning in 2021.” Google doesn’t explain what these new regulations are, but the timing lines up with an FCC mandate for VoIP services to include location with 911 calls by January 2021.

Google Chat is not terrible 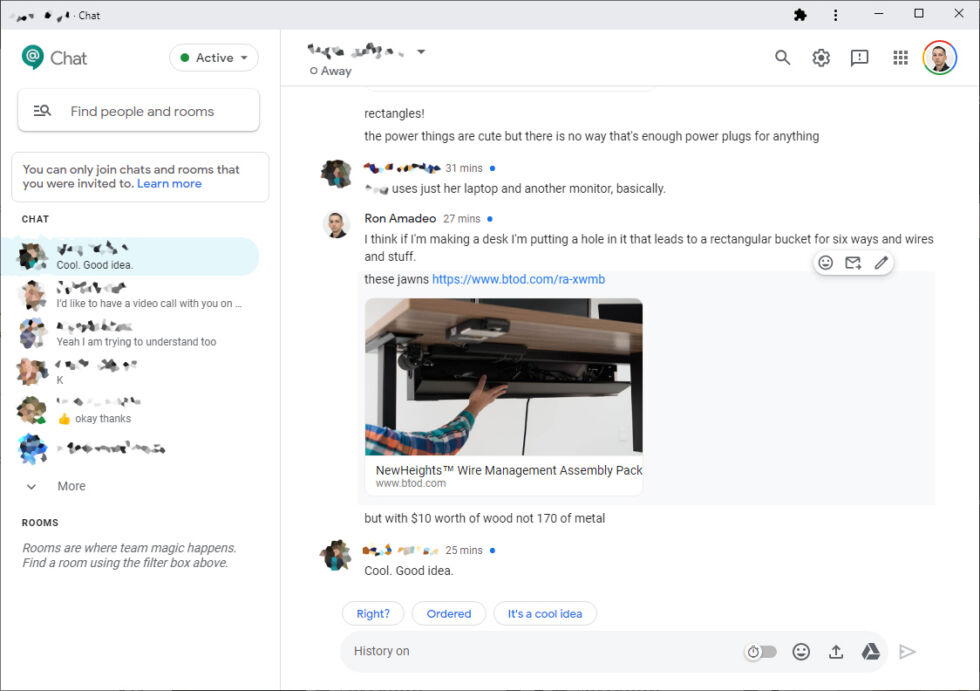 This is all very reminiscent of the other big Google shutdown that’s going on right now: the transition from Google Play Music to YouTube Music. While YouTube Music is nowhere near ready and Google Music users can expect to lose loads of features, Google Chat is actually pretty good as a Hangouts replacement. For whatever reason, I already have access to it on my consumer Google account, and I’ve been free to message my existing Hangouts contacts. There aren’t any showstopping missing features, and the UI is modern and straightforward. It’s not ready yet mostly due to transition issues. I can’t participate in group chats, and I can’t add new contacts, just a certain number of my contacts have been flagged as Chat compatible. The core messaging looks great, though, and if both people are on Chat, you get great features like editing messages. It’s by no means a competitive service compared to messaging ecosystems that don’t get rebooted every two years, but if you just want to send messages and pictures back and forth across all your devices, it’s fine.

As with Google Music, though, Google is transitioning backward again by shutting down an old service faster than it’s building the new one. These transitions would go a lot smoother if Google made the new app fully functional first and then shut down the old app later after people have moved on. Slowly killing its existing apps without having a viable replacement ready doesn’t just feel bad; it opens the door for users to dump Google services completely.

While Hangouts is going to lose more features as soon as this month, we still don’t have a final shutdown date for the service.