Google makes the Pixel 5 official for $699

After what felt like a thousand leaks, Google’s flagship smartphone for 2020, the Pixel 5, is finally official. As we’ve been expecting, this phone doesn’t feature top-of-the-line hardware and is instead more midrange, with a Snapdragon 765G SoC. If you’ve been following the leaks, the main news we were looking for today is the price, which is $699.

The specs include a 6-inch, 2340 x 1080 OLED display with a 90Hz refresh rate, a Snapdragon 765G SoC, 8GB of RAM, 128GB of storage, and a 4080mAh battery. The phone has wireless charging, 18W quick charging over USB-C, and IP68 dust and water resistance. There are two cameras on the back, a 12MP main camera which reportedly is the same sensor the Pixel line has been using for years, a second 16MP wide-angle lens, and an 8MP front camera.

The Pixel 5 design looks just like a Pixel 4a, but a bit more high-end. It has an all-screen front featuring slim bezels and a hole-punch camera. The Pixel 5 looks like it has fully symmetrical bezels all the way around instead of a thicker chin on the bottom like the cheaper 4a. On the back, there’s a throwback capacitive fingerprint reader—a contrast to the in-screen fingerprint readers most phones ship with—and a camera block. The design back is also very reminiscent of the Pixel 4a with a simple, one-color design that wraps around the sides. The two-tone motif of the Pixel 4 (which had a flat back and contrasting sides) or the Pixel 1/2/3 (which had a contrasting top half) has been abandoned.

One late-breaking surprise in the Pixel 5 saga is that the back is made of aluminum. As far as we can tell, the Pixel 5 is the first phone ever to be made of metal while also supporting wireless charging. Typically, wireless charging forces a glass or plastic back, since those materials are RF transparent, while metal is not. We don’t yet know how this works.

All the experimental gimmicks of the Pixel 4 appear to have been scrapped. The new phone doesn’t feature Google’s Project Soli air-gesture system, which the Pixel 4 used to control music, answer calls, and not much else. There’s also no face unlock system, which Google built for the first time on the Pixel 4 in the style of Apple’s Face ID. Another scrapped feature is Active Edge, which let you squeeze the sides of the phone to trigger the Google Assistant on the Pixel 2, 3, and 4. There’s no word of a custom Google-designed co-processor on this device for the camera or AI work. Previously, the Pixel line had the Pixel Visual Core in the Pixel 2 and 3, and the Pixel Neural Core in the Pixel 4. There is a Titan M security module for hardware-backed secure boot and other security work, which has been in previous devices. The Pixel 5 will actually be slower than the Pixel 4, by virtue of the Pixel 5’s Snapdragon 765G just not being a match for the older but higher-end Snapdragon 855 in the Pixel 4.

Of course, the phone ships with the latest version of Android, Android 11, with three years of major updates and monthly security updates. One new feature is that the Google Assistant can now wait on hold for you while you’re calling a business. Instead of having to listen to the world’s worst hold music for half an hour, the Google Assistant can deal with all that and will alert you when someone picks up. There’s also an “extreme battery saver mode” which sounds like, in emergency situations, it will kill all background app processing and only let essential apps through. 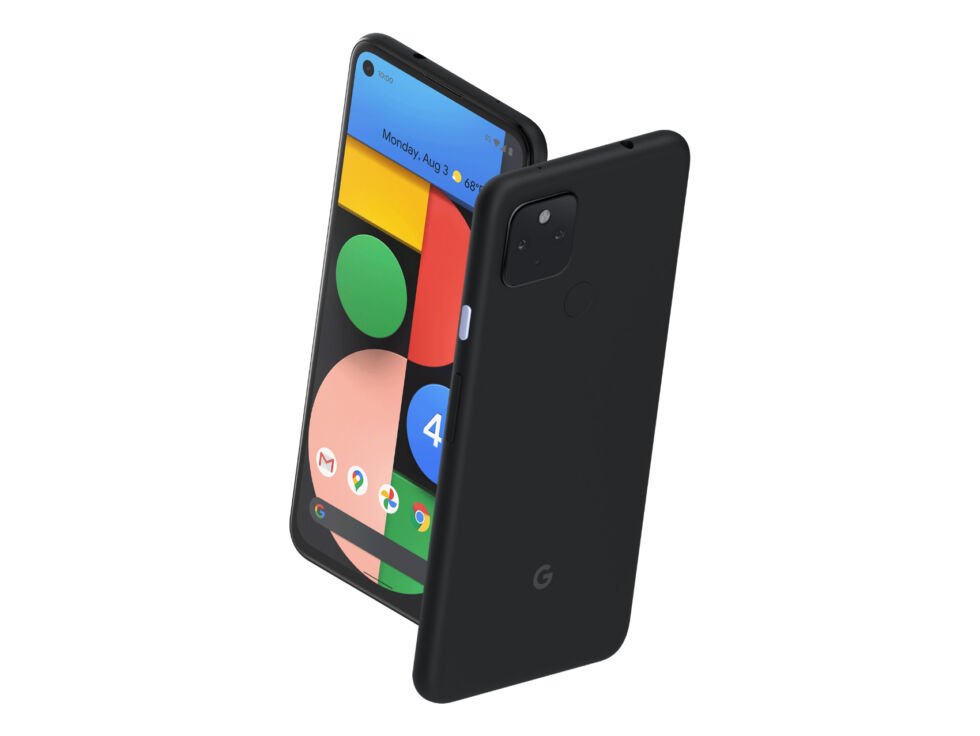 Enlarge / The Pixel 4a with 5G.
Google

Today, Google is also announcing the “Pixel 4a with 5G” which is kind of a midway point between the Pixel 5 and 4a, even though it doesn’t seem like there’s much room between them to begin with. Start with the Pixel 5, give it a bigger, slower display (6.2-inch, 60Hz), less RAM, (6GB), a headphone jack, a slightly smaller battery (3800mAh), remove the wireless charging, give it a plastic back, and make it $499.

Google made a big deal out of the 5G compatibility in the Pixel 5, and this is one of the few cheaper devices that support mmWave, a faster version of 5G with no chance of getting a wide rollout outside of cities. Things are a bit complicated though. The US version of the Pixel 5 supports mmWave and sub-6GHz 5G, while the non-US version does not support mmWave 5G. The Pixel 4a 5G comes in a US-only, Verizon-only version that supports mmWave, while a non-mmWave version should be available in the United States and internationally. If given the choice, I think almost no one wants mmWave and definitely shouldn’t pay extra for it, but that’s not a choice for the US customers of the Pixel 5.

The Pixel 5 is up for preorder now unlocked or on Verizon, and it ships October 30. The Pixel 4a 5G only has a waitlist and has no release date.