Google Nest Audio, Apple HomePod mini, Or Amazon Echo – Which Is Worth Your $99 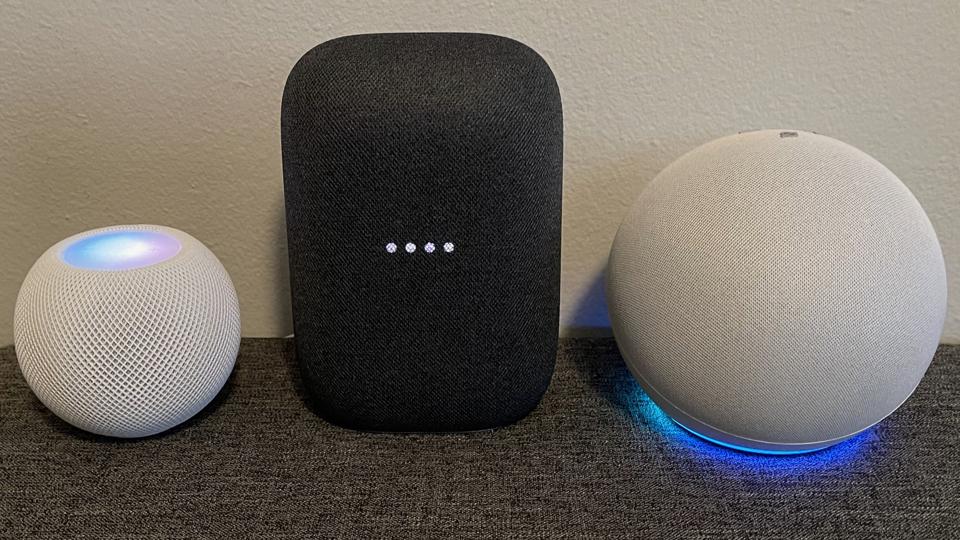 For the first time ever, the big three tech companies all have brand new smart speakers available for $99: Google Nest Audio, Apple HomePod mini, and Amazon Echo (4th Gen). All three promise room-filling sound as well as the convenience of a smart assistant.

But when they all cost the same, how do you choose between them? Let’s take a deeper look.

What’s Under the Hood?

For all three speakers, it’s not as much how big their speakers are or how many of them they have, but what they can do with them. To that end all have onboard computational algorithms to adapt to whatever room they’re placed in.

Google takes this a little bit further and will automatically adjust how it talks back to you in loud or soft environments. It’s a subtle touch that I really appreciate. It also automatically adjusts the equalizer depending on what you’re listening to. So your morning news report doesn’t carry over the heavy bass of last night’s dance party.

How Do They Look?

Both Apple and Amazon have gone with sphere shapes for their latest speakers. 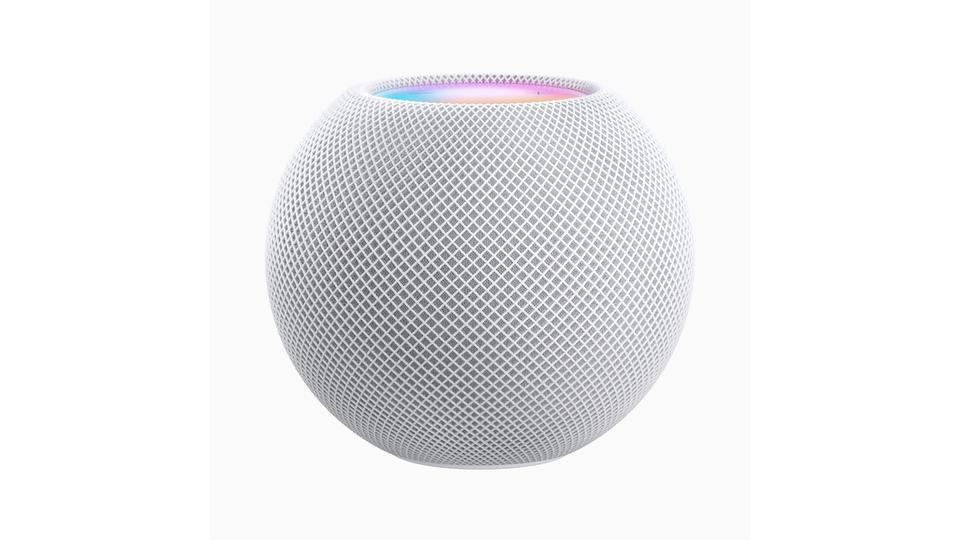 Apple’s HomePod mini is about half the size, however, and looks a little more premium, with a more open mesh that Apple says is “transparent” to sound waves. On top of the HomePod mini there’s a full-color screen that’s used as a Siri listening indicator with touch-sensitive volume controls. 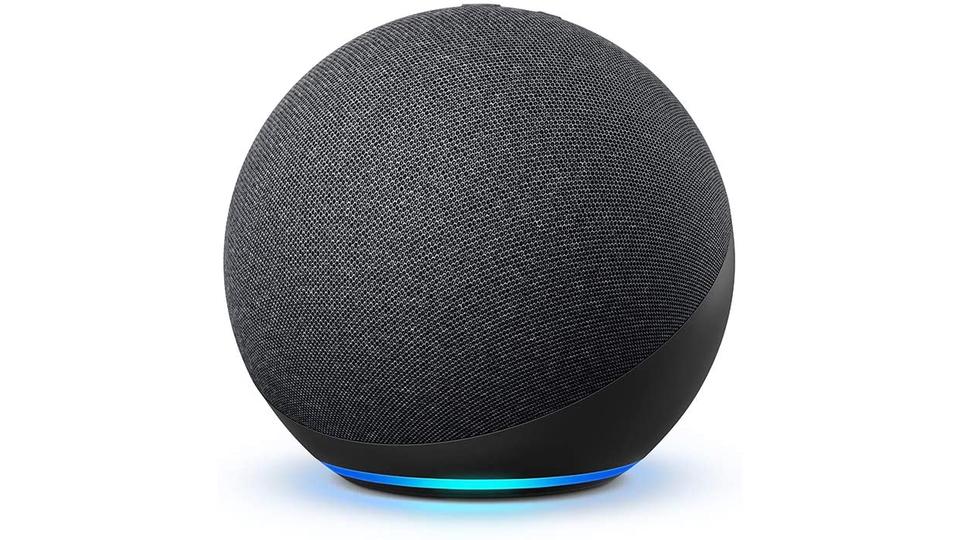 The Echo has a fairly standard “speaker fabric” appearance and raised volume, mute, and activate buttons. It looks nice…for an Amazon device. It’s definitely an improvement over the hockey puck or cylinder of previous years. However, between the two, Apple’s looks like the more premium device. 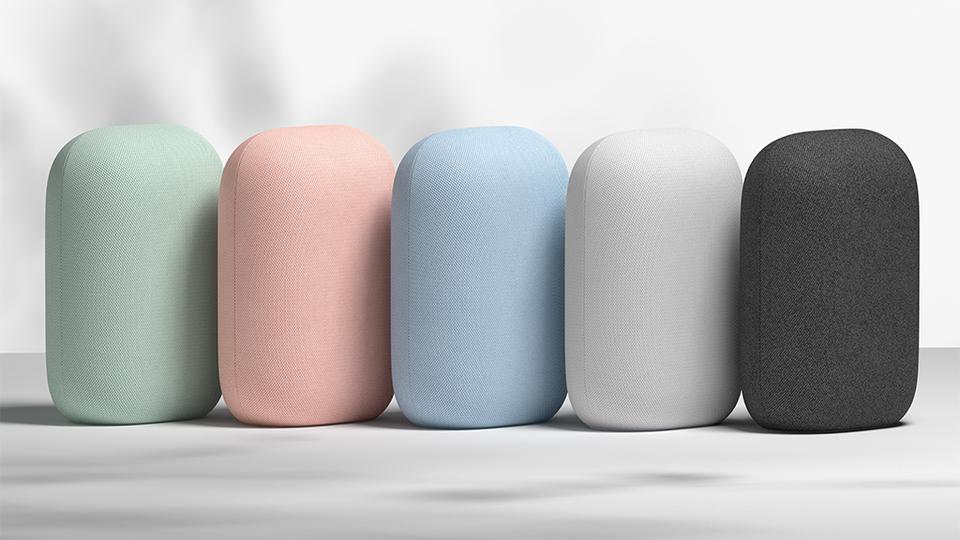 The Google Nest Audio goes for a more “rounded rectangle” design that has no visible controls. However, each corner is touch sensitive and you can activate the speaker with a tap on the top.

Color-wise, Apple offers only white or black options, while Google has an array of muted, decor-friendly colors. Amazon is the only manufacturer that offers a little bit of visual punch with a limited-edition (PRODUCT)RED version to complement their black, white, and blue options.

How Do They Sound?

I tasked each speaker with playing Gershwin’s “Rhapsody in Blue” (not simultaneously, because I’m not insane) to test their dynamic range.

The Apple HomePod mini performed admirably, giving me every note with crystal clarity. It couldn’t quite reach the volume of the other two speakers but it was still more then enough to make me wince at the highest levels. Even with the speaker turned all the way up, there was no distortion. Its 360 design gave it an edge here, with clear sound reaching every corner of the room.

The Google Nest Audio produced a fuller sound, exploring the bass notes of the piano and the trill of the clarinet more clearly. The Nest Audio’s design stacks the woofer and tweeter (like in a traditional speaker) and ultimately does a better job of giving you a dynamic range. The onboard tuning software adapts output to properly fill your room, no matter if it’s a bedroom or a high-ceiling living room.

Somewhat surprisingly, given its size compared to the other two, the Amazon Echo fell a little bit flat in the Gershwin test. Sure, it gave me plenty of volume for the punchier parts of the piece, but quieter moments were so low as to almost be lost. The sound quality isn’t bad by any stretch but listening to the 4th-gen Echo after the Nest Audio and HomePod mini, it’s apparent who has the superior audio engineers.

If you’re lucky enough to have two HomePod minis, Nest Audios, or 4th-gen Echoes, all three speakers can be paired with another to create a stereo duo.

Likely, you already have a favorite in this category. If you have an Android phone or use Nest smart products (like the Thermostat or Cam), then Google Assistant is going to be familiar and the most useful for pulling together your smart ecosystem. If you use iPhones, then the HomePod mini offers deep iOS integration and lets you do things like hand off music from your phone to the speaker with a tap and send intercom messages to everyone in your home group.

For all three devices, you’ll be able to control other smart devices if you’ve added them to the manufacturer’s respective smart hub app (Google Home, Home, and Amazon Alexa, respectively).

Personally, I find Google Assistant to be good for general informational queries. Whereas Apple’s Siri tends to get confused easily on broad topic questions and is more helpful when you’re doing things in the Apple ecosystem. Then there’s Amazon Alexa, which excels at feeding you Prime music and helping you shop for things, but has the tendency to turn every request into a sales pitch (when asked about the weather, Alexa ultimately tried to get me to shop for holiday gifts).

So what happened? Is Alexa suddenly smarter than Google or Apple? That’s a possibility. But more likely is that I have a FireTV and use the Prime Video app on two other TVs in my home. I’ve watched Thursday Night Football on all three. Putting together my viewing habits with my location (because of course Amazon knows where I live), it isn’t a huge computational leap to figure out what team and sport I’m talking about. Amazon might not be smarter, but it knows how to leverage the data it’s collected about you to appear smarter. And anyone who programs algorithms can tell you, it’s not how clever you make your bot, it’s how much data you feed it that makes it successful.

If you’re an Apple household, the Apple HomePod mini is a phenomenally good speaker that offers handy features only available if you have other iOS and macOS devices. It’s a refined package that pumps out a truly surprising amount of sound. It’s made to be an Apple home hub, recognizing up to six different users so that everyone gets Siri responses based on their individual profile.

Google Nest Audio is a great speaker. Full stop. It also has the power of the world’s best search engine behind it so if you’re the type that likes to pepper your smart speaker with questions, you’re going to find interacting with the Nest Audio much more satisfying. If you also happen to be an Android household, use other Nest products (like the Nest Thermostat), or even just use your Google account for maintaining your calendar, you’ll find a ton of reasons to like the Nest Audio.

If you’re a Prime member and you don’t have an Alexa-enabled speaker of some sort, you’re missing out. There’s a wealth of free music, apps, and games available. The later category has skyrocketed in quality recently. In fact, the Paizo Starfinder app is one of my favorite digital games of the year and it’s only available on Alexa. The Echo is the only device of the three that can act as a smart hub all on its own. If you use Zigbee devices in your home, the 4th-gen Echo can connect to them and let you control them with your voice. It can even listen for the sound of smoke alarms or breaking glass and alert you with the Guard feature.

All three speakers give you a lot of value for $99. If you’re looking for the best sound quality, I feel that the Google Nest Audio edges out the other two. Want more entertainment options? Then you should give the Amazon Echo a try. If you’re deep into the Apple ecosystem and just signed up for a new Apple One subscription, then the HomePod mini makes the most sense.

If I had to choose just one, I would pick the HomePod mini. It fits wonderfully into any decor and delivers impressive sound for its size. And since mine is an Apple household, it provides useful features that I just can’t get with Google or Amazon.

That said, you can’t go wrong with any of the three and with Black Friday and Cyber Monday right around the corner, you can bet there will be deals on all of them (well, maybe not the HomePod mini, Apple can be stingy when it comes to sales).

Someone leaked the COVID hospitalization data taken from the CDC

‘Welcome Back To Earth!’ – Rocket Lab Becomes Second Company After SpaceX To Launch And Land A Rocket

New Zealand, With Its Covid-19 Outbreak Under Control, Is In Talks With Biden As U.S. Exceeds 12 Million Cases