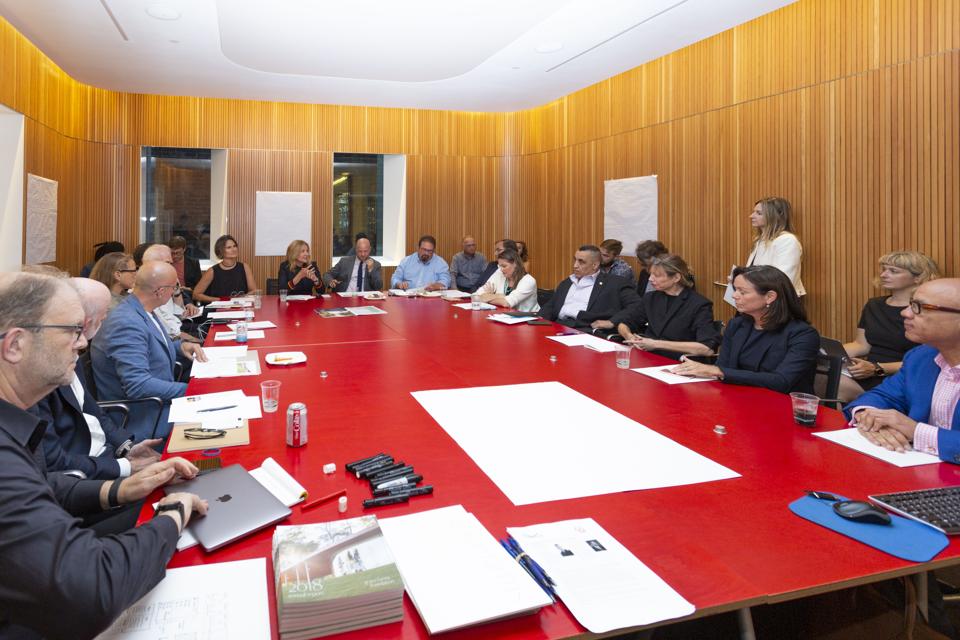 Today, New Canaan, Connecticut-based nonprofit Grace Farms Foundation released “Design For Freedom,” a report that calls to eradicate modern slavery in the architecture, construction and design industry. By addressing the systematic use of forced labor within the building supply chain, the report aims to spur an ethical movement via actionable steps for change. The idea originated in 2017 in a discussion between Grace Farms Foundation CEO and founder Sharon Prince and the late Architect’s Newspaper editor Bill Menking and evolved into a working group of more than 60 industry leaders that envisioned new materials supply chains to eliminate those made by forced laborers, adjust procurement processes that may support unethical systems and advocate for policies to support migrants.

“Design for Freedom is calling for the entire ecosystem of the built environment to add ethical, slave-free criterion to emerging technologies and production at this rare inflection point where the lagging construction sector is poised for disruption,” says Prince who co-edited the report with her colleagues Luis C.deBaca and Chelsea Thatcher. Though global laws forbid the use of modern slavery, “almost all modern construction projects are subsidized with slavery, due to unchecked forced labor that permeates thousands of raw and composite materials sourced both locally in the United States and globally,” she continues. According to the International Labour Organization, almost 25 million people are forced into labor and close to 152 million children from the ages of five to 17 are subjected to child labor.

Drawing comparisons to the way a small wave of support for sustainability swept the design world less than three decades ago to become widespread practice today, the report proposes that an anti-slavery movement could do the same. Led by the practicing leaders in the working group, which includes architects like Jing Liu and Florian Idenburg of SO-IL as well as construction professionals like Joseph Mizzi of Sciame Construction, the call aims to draw attention to and enact solutions for the humanitarian crisis of modern slavery through collective action. “Sometimes architects and designers forget that design entails producing a collection of  instructions to rearrange our material world’s makeup. We fail to realize that every line a designer or architect draws sets into motion a string of actions that have environmental, social, and ethical repercussions,” write Liu and Idenburg in their essay, “Good design must go beyond good intentions,” within the report, “Today, we cannot ignore this fact anymore.” Says Prince: “While sustainability is prioritized across the architecture, engineering and construction industries, we do not see ethical, slave-free supply chains anywhere on the industry’s agenda.”

Initial attention to the crisis developed ethical labor practices on job sites, but the problem has penetrated far deeper into the industry, and closer to the design phase itself, to the systems with which building materials themselves are produced. The Design For Freedom movement calls on its members to lead by example at their practices, ensuring their own procurement processes avoid all unethically-sourced or made materials and to encourage others in their respective industries to do the same. The working group, too, plans to use its power within the built world to advocate for expanded regulations regarding anti-slavery, not just on site but to “the building materi­als supply chain, including oversight of sub-contractors, manufacturers and commodities-level providers in such areas as forestry, fiber and mining,” says Prince.

Like the sustainability standards of LEED, BREEAM and others worldwide, the ultimate goal the Design For Freedom movement is to spark a movement for change that results in legislature to ensure the eradication of modern slavery throughout the built environment. “The U.S. Trade Facilitation and Trade Enforcement Act of 2015 (TFTEA), which is finally coming to the forefront, forbids importation of any goods made with slave-labor from entering the U.S.,” she explains. “Now is the time for those in the built environment to get ahead of their business risk, and do the right thing.”

BTS, K/DA, Beyoncé And TOMORROW X TOGETHER: Watch These Titles On The World Albums Chart

Why Is Manchester United’s Ole Gunnar Solskjaer Facing More Criticism Than Most?