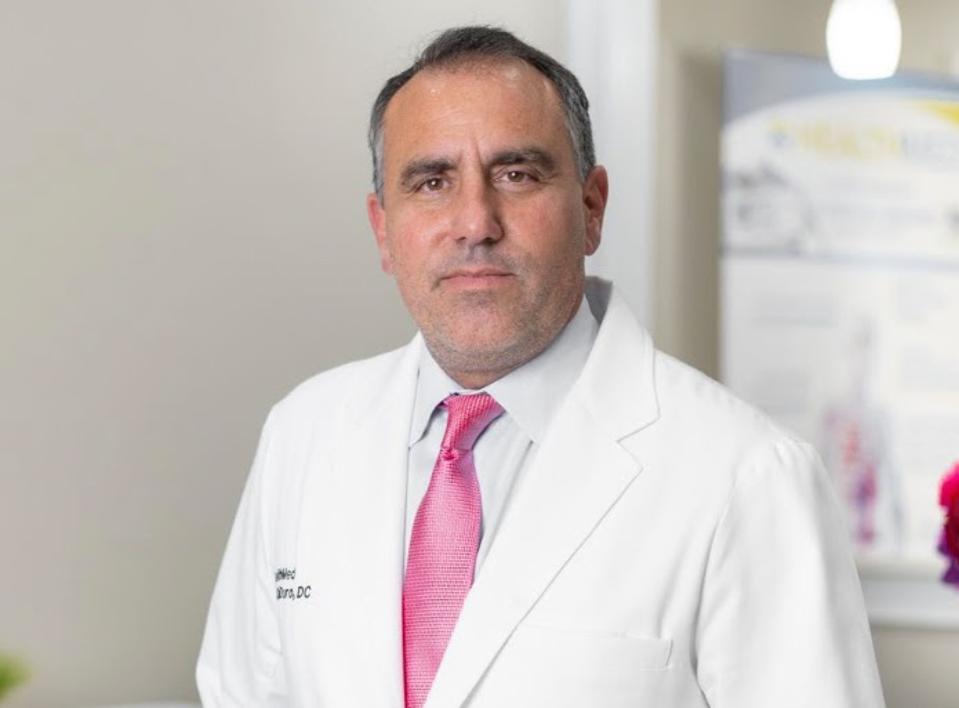 In the darkest of times, we make the greatest breakthroughs.

Dr. Matthew DiDuro is a prime example. A seasoned expert in peripheral neuropathy and a chiropractor for over 25 years, Dr. DiDuro offers a revolutionary treatment to patients who need it most: those suffering from nerve pain, disease, and debilitating injuries. It’s the very same treatment that alleviated his own chronic injury plaguing him for 11 long years. That treatment is called orthotripsy.

Dr. DiDuro’s injury was sudden. On a day like any other, Dr. DiDuro was treating a patient on a chiropractic table. But without warning, the patient fell off the table and careened towards the ground. Without sparing a second thought, the doctor sprang into action to catch his falling patient. But his altruistic act came at a price, and he sustained a multitude of serious injuries.

He dislocated his right shoulder, detached his labrum, and tore several ligaments in his right wrist. Despite over two decades of experience in his field, no amount of experience could have prepared him for such a life-changing circumstance. His best efforts to protect his patient left him in excruciating pain and effectively retired him from healthcare.

He lost his livelihood. Even after undergoing two separate surgeries, both for his wrist and shoulder, there was no assurance that he would ever be able to work again. The shoulder surgery was a complete success, but issues surrounding his wrist prevented him from making a return to his practice. Complications also stemmed far beyond his inability to work – he also lost the ability to carry out basic functions like riding a bike or pushing a lawnmower. The excruciating pain left Dr. DiDuro helplessly looking back on the life he once had.

After decades of treating others, Dr. DiDuro realized that it was time to seek treatment himself. He considered a variety of options purporting a solution, including opioid-based pain management. However, given the laundry list of risks, he was far from convinced. Instead, he investigated other means of treatment. And after a fateful encounter with John Warlick, CEO of SoftWave Tissue Regeneration, he discovered orthotripsy.

The Outlook On H-1B Visas And International Students In 2021

Orthotripsy: The Pain Management of the Future

As Dr. DiDuro learned from Warlick, orthotripsy is extracorporeal shockwave therapy. The therapy uses electro-hydraulically produced supersonic sound waves traveling 5 times faster than the speed of sound that create a shearing force on human tissue, triggering a positive biological response. Dr. DiDuro recounts, “I’d been to doctor after doctor and found zero relief in the years following the wrist surgery. The orthopedics recommended another surgery or strong narcotic prescription medications. Both came with serious side effects and complications. I had been the co-director of the Functional Rehab department at Life University and had millions of dollars’ worth of devices. Nothing helped me,” Dr. DiDuro explains.

“I was looking for opiate-free therapy because I wasn’t willing to trade my pain for a life of addiction. I tried orthotripsy, and the first treatment was earth-shattering for me. The initial treatment only lasted three minutes, but it was like nothing I’d ever experienced in my 26 years of being a healthcare provider,” Dr. DiDuro recounts.

Dr. DiDuro saw his pain reduced to a fraction in less than a month and encouraged his wife to undertake the same form of treatment. His wife was suffering from chemotherapy-induced nerve damage, and much like Dr. DiDuro, she experienced transformational improvement after just one treatment plan. Having been given back many of the liberties in life that we take for granted, he happened upon an important realization. Dr. DiDuro was tapping into one of the best-kept secrets in healthcare. And it was time to bring this medical breakthrough to his patients.

Dr. DiDuro got to work. He spent over two years documenting clinical results and creating a practice guideline to help practitioners implement the same technology in their own clinics. “From there, I started selling the device to doctors and giving them all the marketing tools that they needed to be successful. That included TV commercials, internal marketing for their existing patients, and a complete external educational program to educate their communities about this seemingly supernatural healing device,” Dr. DiDuro says.

With every patient healed by the treatment, it attracted more. And not only did this regenerative treatment greatly benefit patients, but it also proved a lucrative investment for private practices. “The device quickly became a top new patient attractant for the first 60 doctors whom I sold it to. As the momentum continued to build, I was really excited to see how far it could snowball,” Dr. DiDuro recalls. “The more people we helped, the more financially stable these clinics became.” Orthotripsy proved itself the gift that keeps on giving, with patients and practices alike benefiting from the revolutionary procedure.

The business was growing at an unprecedented pace, and the technology continued to help patients with no signs of stopping. But then, COVID-19 took over.

Met with a worldwide pandemic, Dr. DiDuro was reminded of the feeling of helplessness that once plagued him during his serious string of injuries. Proving to be an existential threat, and one that could seriously threaten the longevity of his business, Dr. DiDuro reflected on his perspective. “I had a good friend that was a Navy seal. He helped me change my mindset several years ago. When he saw obstacles, he knew that there must be solutions. We just have to find the right one for that specific problem,” Dr. DiDuro maintains.

On average, his patients were senior citizens, averaging around 69 years old. This meant that they largely fell into the ‘high risk’ category, given their propensity to encounter serious complications due to the virus. As a result, most of his patients were ordered to stay at home and quarantine for months. The lack of patients starved the company of cash flow, and the threat of bankruptcy was on the doctor’s mind.

“Our clinic at ATL Pain Institute’s main focus was to help people suffering from diabetic and peripheral neuropathy, but there was simply no one coming in for treatment due to COVID guidelines,” Dr. DiDuro recalls. The clinic spiraled from welcoming 900 new patients each year to virtually nothing. Struggling to find new prospects, paying bills and employee wages became a challenge, and 16 employees had to be furloughed.

In much the same way that kept him going during injury, Dr. DiDuro offered nothing less than an unrelenting spirit. He knew that he had to find a way to keep the clinic open. And as fate would have it, he met Boston-based advertising specialist, Tom Kostopoulos.

Calling on Kostopoulos’ digital marketing expertise, Dr. DiDuro was able to drop the cost per lead to its lowest point since 2007. Before long, prospective patients began flooding back to clinics. Kostopoulos’s experience in advertising perfectly positioned him to find those suffering from chronic pain, and his company was able to drive these potential patients into clinics. In addition, the Boston-based ad specialist began to locate doctors around the country with an interest in learning more about orthotripsy technology. Dr. DiDuro spent much of his time in lockdown leading remote conferences, regularly educating doctors about the technology up to three days per week. This led to even more clinics using orthotripsy in their practices and bringing it to their respective communities.

The company’s beta test in Atlanta exceeded expectations. Now, there are 90 clinics across the country utilizing this program, driving over 3,600 new patients per month into a variety of clinics. Dr. DiDuro closed our interview with high hopes, “We are preparing to launch our international distribution company. We have plans to bring this to countries that don’t yet have access to the technology,” he announces.

“Nothing is more powerful than an idea that has broken through the barriers of a pandemic in the name of necessity.” It’s clear as day: this innovative treatment gave Dr. DiDuro back his lease on life. His inspiring journey shines a light on those who may have lost hope, fearing the permanency of pain and suffering due to injury or illness. But as the doctor discovered on his journey, there are methods outside of opioid treatment or invasive surgery. Orthotripsy presents an all-encompassing, effective solution, and 2021 will see the shockwave therapy reach countless countries across the globe.