Everybody loves a solar eclipse—and there’s one coming to North America in exactly six months. However, very few will see it.

The “Great American Eclipse” of August 21, 2017 was reckoned to have had an audience of around 215 million—and around 12 million within the all-important “path of totality.”

The next total solar eclipse in North America is on April 8, 2024, and could see as many as 50 million people have nature’s greatest experience.

However, that is not America’s next solar eclipse. That’s in exactly six months when a “ring of fire” solar eclipse will occur over Canada—and bring a huge partial solar eclipse to a large number of Americans.

When is the next eclipse?

On Thursday, June 10, 2021, some of the U.S. and Canada will see a huge partial solar eclipse before breakfast. Some viewers in very remote areas of Canada, Greenland and Russia will also see a perfect “ring of fire” around the Moon.

Why will so few people see it?

Aside from the “ring of fire” being so remote there are other reasons why few will see even a partial solar eclipse.

It will happen just moments after sunrise in North America (in New York City a huge partial solar eclipse will be visible at 05:32 a.m.) so very few Americans will see it.

It will also be very low on the northeastern horizon, making it difficult to observe. 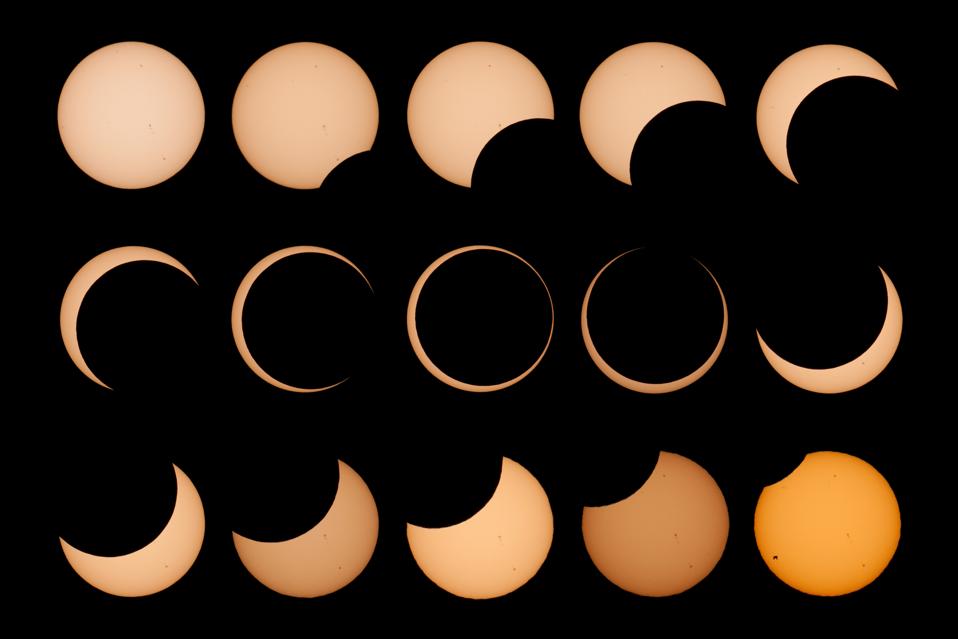 What is the next eclipse?

Before you put that date into your diary it would be wise to know what kind of solar eclipse America’s next eclipse is going to be.

Rather than a total solar eclipse this one will be an annular solar eclipse, also known as a “ring of fire.” Recent examples have occurred on Christmas Day 2019 and on the June Solstice 2020, both in the Middle East and Asia.

What is a ‘ring of fire’ solar eclipse?

It’s a “pretty” partial eclipse. A solar eclipse results when a New Moon passes across the Sun, but it’s more complicated than that. The Moon has an egg-shaped orbit of Earth so at some points in its orbit it’s further from Earth—and thus smaller in the sky. That’s the case on June 10, 2021, when the Moon will be about 90% the apparent diameter of the Sun, and thus won’t cover it completely.

From a 7,775 km long and wide “path of annularity” it will be possible to see a bright ring around the Moon for (a maximum of) 3 minutes 51 seconds—something you must always watch through special solar eclipse safety glasses.

The same goes for the partial solar eclipse, which will be visible throughout north-east USA and eastern Canada, Europe and central Asia. 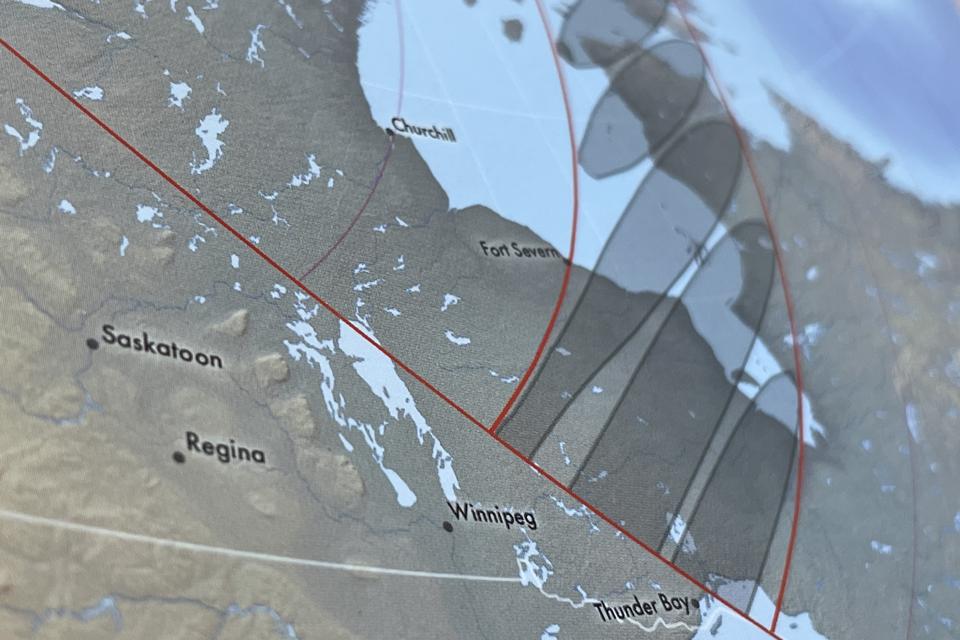 Where to see the “ring of fire” solar eclipse in Canada

From North America the “ring of fire” will only be visible from the isolated wilderness of far north Ontario, Canada—specifically from the tundra of Polar Bear Provincial Park on Hudson Bay, where a “ring of fire” lasting 3 minutes, 33 seconds will be an incredible sight just after sunrise.

It will be mostly easily seen from a small plane above the region’s boreal forests (and probable clouds).

According to the excellent Atlas of Solar Eclipses: 2020 to 2045, from the coast of Hudson Bay in Polar Bear Provincial Park observers will see a 3 minutes 33 seconds “ring of fire” 6º above the north-northeast horizon.

It will also be possible to watch from northeast of Thunder Bay, Ontario, which has an airport and scheduled flights from Toronto.

At the time of writing, Nunavik in province of Quebec, Canada will be closed for all non-essential travel until May 31, 2021.

Where to see the “ring of fire” solar eclipse in Greenland

Travel restrictions allowing, there are also a few group tours being organized to watch the event further north in Greenland, where the chances of cloud are significantly smaller.

Betchart Expedition is planning two trips, the first is to Baffin Island in the Canadian province of Nunavut while the second will be to the town of Qaanaaq in far northwestern Greenland near the geomagnetic north pole. “From the rapidly melting Greenland glaciers to the thinning sea ice we’ll experience first hand the changing nature of summer on the landscape and people of the Arctic just 10 days before the solstice,” said Dr Tyler Nordgren, an artist, astronomer, night sky ambassador and author of Sun Moon Earth, who will be leading one of the trips.

“At these northern locations nighttime is a thing only experienced in other seasons, as the circles the sky and the “Ring of Fire” will be visible low to the east above snow-covered peaks,” said Nordgren.

AstroTrails will also be taking eclipse-chasers to Qaanaaq in northwestern Greenland. 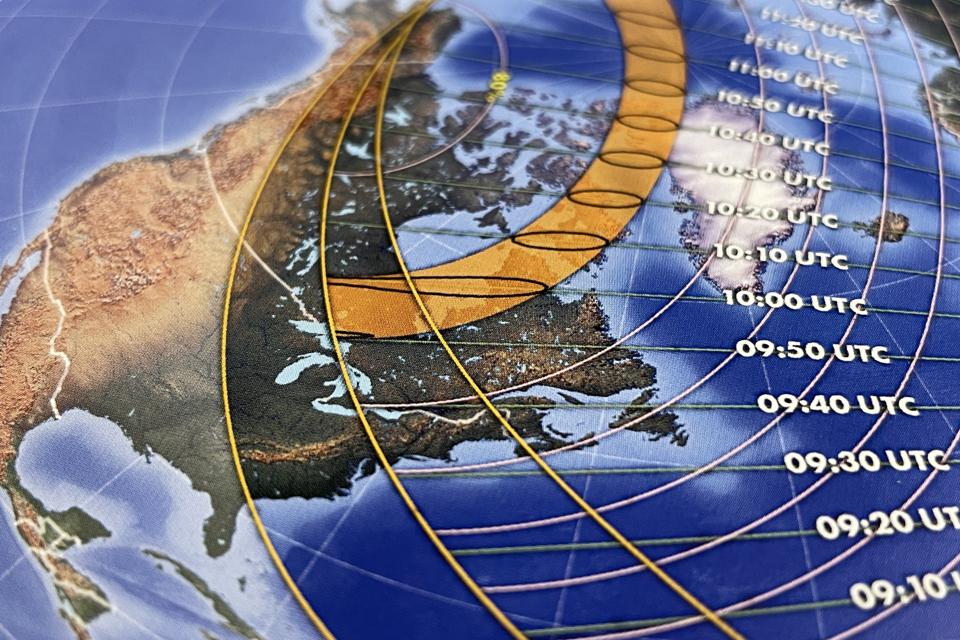 That’s the easy bit … sort of. Since it all happens at or very soon after sunrise in northeast USA you need to be northeast of a line between New York and Rochester, or thereabouts, to see anything at all.

In Europe, London will see a 20% partial solar eclipse, Reykjavik in Iceland 60% and Moscow 15%.

When is the next total solar eclipse?

Many view annular solar eclipses as mere warm-ups to”the big one”—a total solar eclipse. The next one will occur on December 4, 2021 in Antarctica—the second eclipse in a year of “pole to pole” solar eclipses.

Disclaimer: I am the editor of WhenIsTheNextEclipse.com