Intel may have had a shakeup at its CEO ranks yesterday, but the show must go on. Every year, the tech news cycle kicks off in January with the expansive Consumer Electronics Showcase, or CES, where companies from all over demonstrate their latest and greatest. I lost count at how many I attended at 20.

This year’s showcase, held this week, is slightly different from usual in that it’s taking place digitally. Aside from that, it’s the same old CES, and there’s a lot of tech news to be excited about. Intel is a mainstay at the conference. For the last several years, its focus at CES has been on its automotive business—perhaps the company’s most significant opportunity for IoT diversification and success.

At the heart of Intel’s automotive business is Mobileye, an Intel subsidiary acquired in 2017 and is approximately a $1B annual revenue business. This year Mobileye took the occasion to unveil new technology and present its broad strategy for global autonomous vehicle adoption. I’ve long said AVs will be one of the most impactful, paradigm-shifting innovations we’ll see in our lifetimes. Still, for that to happen, the technology must be highly scalable, both geographically and economically. Let’s take a look at how Intel and Mobileye plan to achieve this. 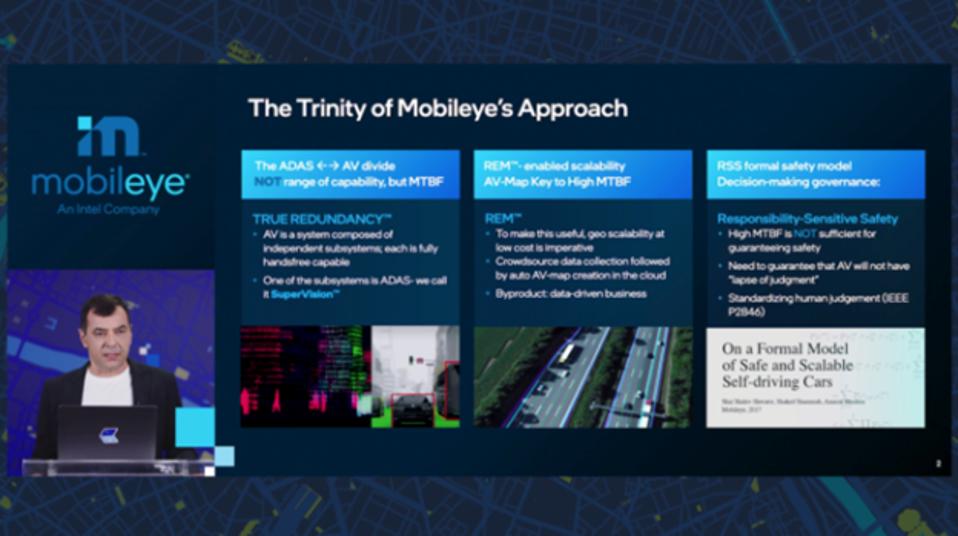 The Trinity of Mobileye’s Approach

During his keynote, Mobileye President and CEO Amnon Shashua described the company’s strategy as a “trinity”—a three-pronged effort to drive rapid geographic and economic scalability. This approach, he says, will enable Mobileye to “win” the race to deploy fleets of AVs globally (a goal it has pledged to meet by 2025). This trifecta includes:

Combined, according to Mobileye, these components deliver a sensing solution that is “orders of magnitude” more capable than human drivers. For AVs to reach their full potential and reach full-scale deployment, this level of capability is essential.

Mobileye is taking a unique crowdsourcing approach to map generation, in which driving assist cameras inside of production vehicles send data to the cloud, where it is knitted together to form high-definition maps. Shashua says Mobileye now has 1,000 production vehicles in the process of “basically mapping the world”—entirely from the cloud.

For example, in Munich, Mobileye has been able to map 20,000 kilometers of data in a mere two weeks, using only two drivers (field support employees who aren’t even engineers). Less than two weeks of mapping and Mobileye is now running test AVs in the city. Mobileye believes this quick turnaround will enable it to scale its technology across the globe rapidly. The company plans to implement the same strategy in Shanghai, Tokyo, Paris, Detroit and NYC, (pending regulatory approval) in the coming months.

The company says it has already mapped one billion kilometers globally, at a pace of eight million kilometers per day. According to Mobileye, its mapping process is unique in that, unlike other methods, it pays attention to semantic details for understanding and contextualizing environments.

Mobileye’s RSS (Responsibility-Sensitive Safety) framework is based on mathematically-modeled rules—safety musts with which any safe human driver is likely familiar. Without getting into the specific formulas, the five rules in Mobileye’s RSS systems are:

Shashua claims this RSS framework is its most significant achievement in its AV efforts. This strategy aims to ensure these vehicles will behave in accordance with human judgment—very important since they will be sharing the road with human drivers.

Mobileye says it is building these mathematical models, designed to replicate these human considerations, into its algorithms, with full transparency. Only by being completely transparent, according to Shashua, can these autonomous vehicles win the confidence of regulators and the general public.

Intel and Mobileye also lifted the curtain on two new pieces of technology at CES 2021, designed to bring down the cost of AV sensoring systems significantly. These include a groundbreaking Lidar SoC, which the company says it will deploy in its fleet by 2025. This SoC promises to deliver a considerably more streamlined manufacturing process and smaller assembly by building passive laser elements onto a chip. Additionally, Mobileye shared plans for a software-defined imaging radar system featuring 2304 channels, 100DB dynamic range and a 40 DB side lobe level.

When paired inside an AV, along with a camera system, Mobileye says these two technologies will provide “total redundancy.” Shashua illustrated the value of such a system using smartphones as an analogy. If you have both an Android and an iPhone in your pocket, what are the odds that both will fail at the same time? Camera-based safety systems are great, but alone, they do not provide the level of confidence necessary for total autonomous driving. The rate of failure, with current technology, is still too high to be acceptable. With radar and lidar augmenting the camera system and providing backup, however, AVs can achieve an exponentially lower failure rate. And with Mobileye’s forthcoming affordable radar and lidar offerings, this approach should soon be economically feasible.

After seeing Intel and Mobileye present at CES 2021, I’m even more hopeful that we’ll see fully autonomous AVs in the not-so-distant future. Mobileye always seems to “get it” based on what it says and how it approaches things which I chalk up to being in this game longer than anybody.

While a 2025 deployment may prove to be a tad ambitious, Mobileye’s strategy appears sound and smartly focused on scalability and long-term success. The trinity of safety system redundancy, rapid, in-depth environmental mapping, and the “human” element of risk analysis, RSS, is a powerful proposition.

The race for global AV deployment is on in a big way—I wouldn’t bet against Intel and Mobileye.

Note: Moor Insights & Strategy writers and editors may have contributed to this article.