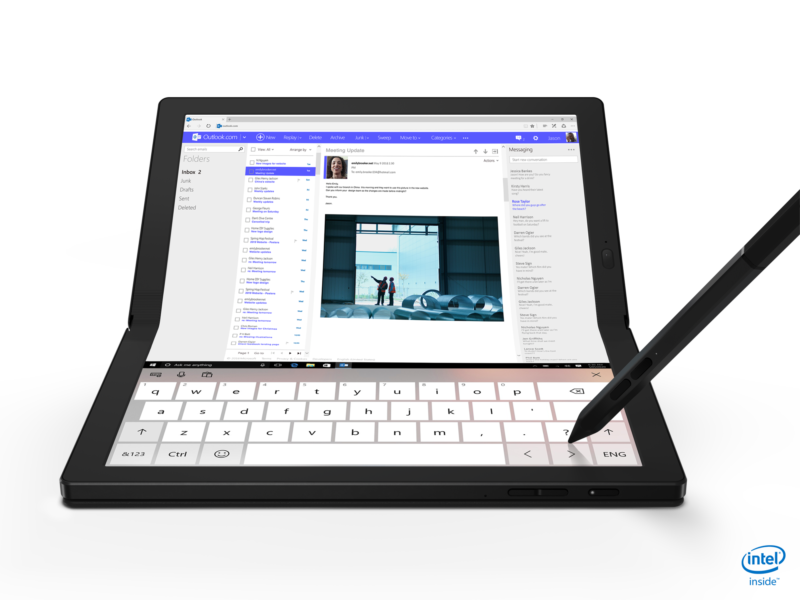 Enlarge / The X1 Fold is aiming for the same basic target as the Samsung Galaxy Fold—but in a more laptop-ish form factor.
Lenovo

Lenovo is following on Dell’s heels with an announcement of two 13-inch Intel Tiger Lake powered laptops of its own—but Lenovo’s new designs are considerably further “out there” than Dell’s. Lenovo’s two new designs are the X1 Nano—a traditional but ultralight laptop weighing in at less than two pounds—and X1 Fold, a not-exactly-laptop design with a folding screen.

Yes, you read that right—the X1 Fold is to feature a folding LCD display, aiming at the same basic target Samsung did with the Galaxy Fold. Our own Ron Amadeo reviewed the Galaxy Fold in January and was very unimpressed, but it has been nearly a year, and Lenovo may well have figured out a few things that Samsung did not. We’re reserving judgment on the X1 Fold until we can get one in our hands.

The X1 Nano is a pretty straightforward design—it’s extremely sleek and lightweight, but apart from that, it’s a standard 13-inch laptop. It will be available in black, as shown above, with no further colors announced at this time.

It’s worth stressing just how thin and lightweight the X1 Nano is, though—it’s about 25-percent lighter than the XPS 13, and 10-percent thinner. Its keyboard has an uncompressed arrow key layout—but it also has the Thinkpad Trackpoint, which is usually either loved or hated with equal ferocity.

Rounding out the major differences, the X1 Nano has large cooling vents along the right side—a more lap- or blanket-friendly arrangement than the underside-only cooling vents on the XPS 13.

As far as ports go, the X1 Nano is even more minimalistic—you get two Thunderbolt 4/USB-C ports and a 3.5mm audio jack. That’s it.

The X1 Fold is another Tiger Lake powered, 13-inch lightweight laptop design from Lenovo. Except it’s not quite a laptop, according to Lenovo’s own press about it. Except when it is, of course.

Confused yet? We don’t blame you. We suspect it’s a little too early for anyone to really know quite how a folding screen is (and is not) truly more useful than a conventional one—but if you’re an early adopter, the Fold is—or at least will be—here for you.

Fully unfolded, the X1 Fold sports a 4:3 13.3-inch QXGA (2048×1536) touchscreen display, at 300 nits brightness. But it doesn’t need to be fully unfolded—it can be folded roughly in half either inward or outward and can be configured to display separate windows on either side of the seam.

The X1 Fold is available to preorder now, with prices starting at $2,500. We do not have concrete shipping or general availability dates yet.

Lenovo is playing its hardware and software configuration options much closer to the chest than Dell did; we’ve been given a general range but no specifics on many configurable options, such as operating system and CPU. What we do know so far follows below.