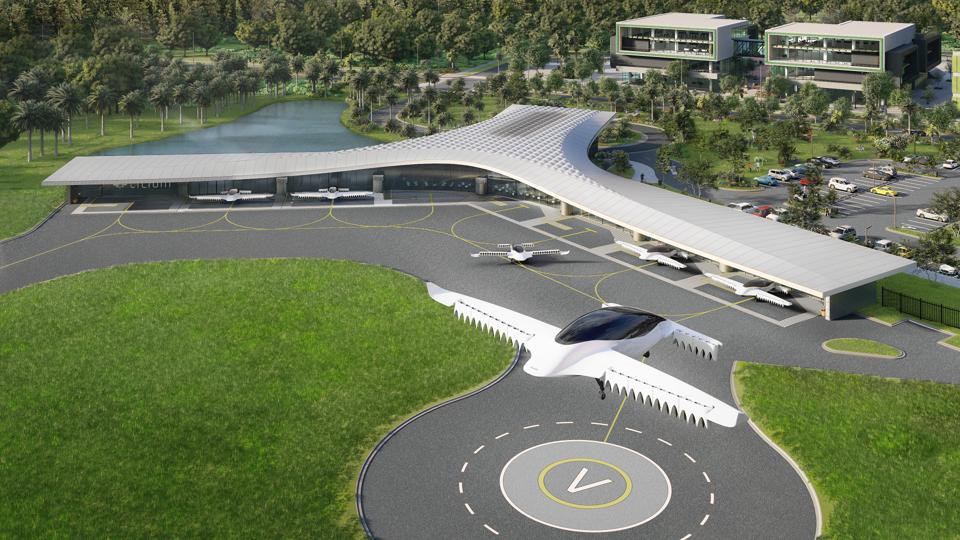 An artist’s rendition of Lilium’s planned vertiport in Orlando’s Lake Nona, which it envisions as a … [+] hub for a statewide air taxi network.

The German electric aircraft developer Lilium is partnering with the real estate developer Tavistock to build a hub in Orlando for an inter-city transportation network in the tourist mecca of Florida that it intends to launch in 2025, the first concrete plans yet announced by any of the scores of companies aiming to establish air taxi services as to where their vehicles will get off the ground in the United States.

Tavistock, owned by British billionaire Joe Lewis, will build a 56,000-square-foot “vertiport” with eight landing bays at its Lake Nona development next to the Orlando airport, Florida’s busiest.

Lilium aims to be an option for the 50 million travelers who pass through the Orlando airport every year in normal times to travel onward to Tampa, St. Petersburg, Miami and Fort Lauderdale, and between them. Remo Gerber, Lilium’s chief commercial officer, says its aircraft, which the startup says will be able to carry four passengers and a pilot 186 miles (300 km) at a speed of 186 miles per hour, will cut travel time from Orlando to Tampa to 30 minutes compared to 1.5 to 2 hours by car.

“We believe at the beginning it’s going to be city to city where you create the most customer benefit,” says Gerber, rather than routes inside of cities.

Since most customers will need to sandwich their air taxi ride between train, car or bus trips to cover the first and last miles, only on longer journeys will the greater speed of the air leg balance out the transfer time and higher cost – Gerber says Lilium generally sees that tipping point at trips greater than 45 minutes, or 13 to 14 miles.

Lilium’s aircraft is powered by 36 tilting ducted fans designed to allow it to take off and land vertically like a helicopter while cruising with the efficiency and speed of a winged aircraft.

According to the consultancy Roland Berger, there are about 100 projects under way around the world to develop electric vertical takeoff and landing vehicles (EVTOL) intended to enable city dwellers to soar over snarled roads. Uber has partnered with a handful of them, including Hyundai Motor and the Toyota-backed, California-based startup Joby, with the aggressive goal of launching an urban air taxi service in 2023. It has yet to announce launch locations.

The ‘Magic Bullet’ Drones Behind Azerbaijan’s Victory Over Armenia

Lilium previously announced it will launch service in North Rhine-Westphalia, Germany’s most populous state, which includes the cities of Dusseldorf, Cologne and Dortmund.

Lilium’s flight testing program has been set back by a fire that destroyed its first full-scale prototype while it was undergoing maintenance, as well as the Covid pandemic, but the company says it’s still on track to launch service in 2025.

In June, the Scottish venture capital firm Baillie Gifford invested $35 million in the company, extending a Series C fundraising round that’s brought in $275 million that was led by Tencent, putting its valuation post-money at $1 billion, according to Pitchbook. Lilium has raised $391 million to date, making it one of the best-funded EVTOL startups.