Megalodons Were Born Big After Eating Unhatched Eggs In The Womb 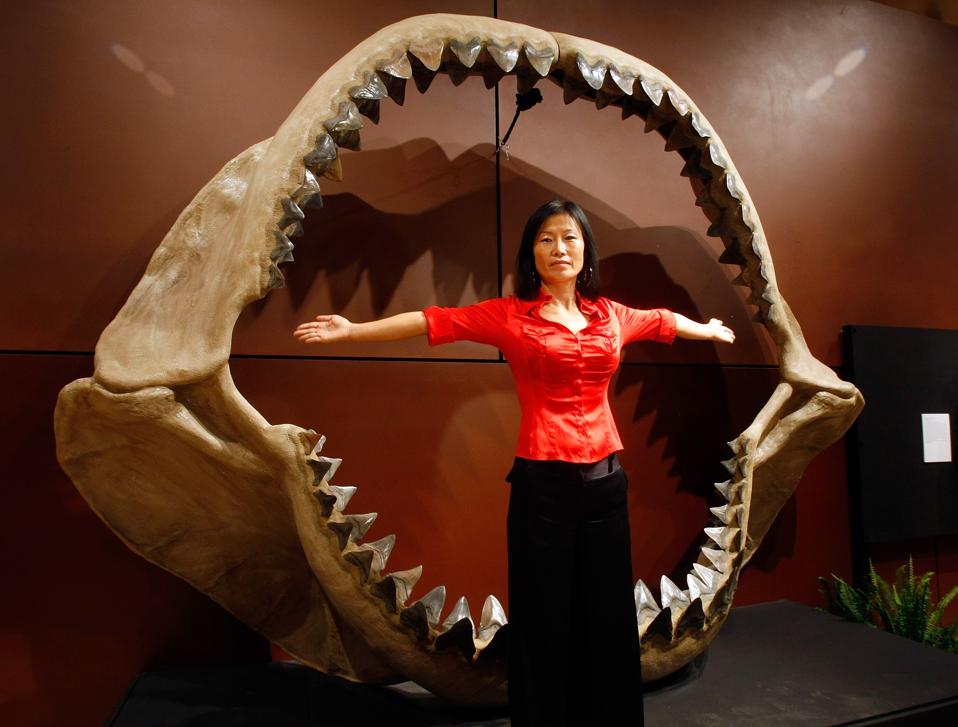 LAS VEGAS – SEPTEMBER 30: Enya Kim from the Natural History department at auctioneers Bonhams & … [+] Butterfields stands in front of one of the world’s largest set of shark jaws comprised of about 180 fossil teeth from the prehistoric species, Carcharocles megalodon, which grew to the size of a school bus, at the Venetian Resort Hotel Casino September 30, 2009 in Las Vegas, Nevada. Bonhams & Butterfields hope the fossil will fetch about USD 900,000-1.2 million when it is auctioned off on October 3 at the Venetian as part of their Natural History auction. The centerpiece of the lot of 50 fossils being auctioned is a 66-million-year-old Tyrannosaurus rex skeleton dubbed “Samson.” The 40-foot-long female dinosaur fossil, excavated in South Dakota in 1992, contains about 170 bones and is said to be the third most complete T. rex skeleton ever unearthed. Bonhams & Butterfields is hoping Samson will fetch more than USD 6 million at the auction. (Photo by Ethan Miller/Getty Images)

The massive extinct shark that has taken a bite out of pop culture thanks to several books, TV shows and movies like 2018’s “The Meg” might have grown oversized even as an embryo.

New research published Sunday in the journal Historical Biology suggests that Megalodons (also known as the megatooth shark) had babies that were larger than most human adults at the time of their birth.

“Results from this work shed new light on the life history of Megalodon, not only how Megalodon grew, but also how its embryos developed, how it gave birth and how long it could have lived,” said co-author Martin Becker from William Paterson University in New Jersey.

The study also suggests that like many related extant sharks such as Great Whites, Megalodon embryos took part in oophagy, or a type of intrauterine cannibalism. In plainer English, the gigantic sharks likely feasted upon unfertilized eggs in the womb. This helped them grow to be about two meters in length (6.6 feet) by the time they were born. 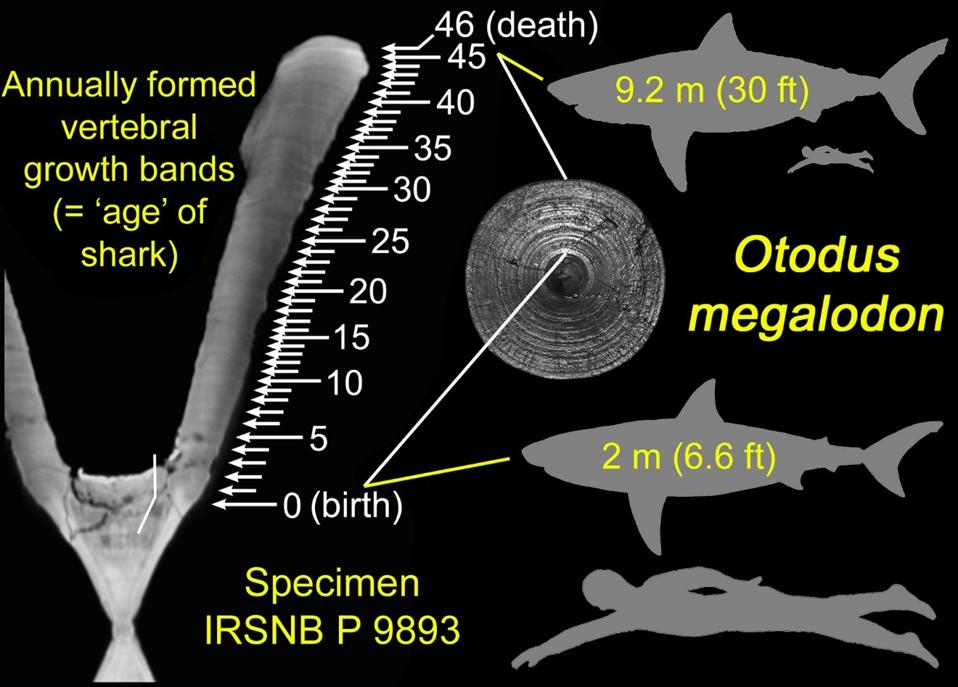 Identified annual growth bands in a vertebra of the extinct megatooth shark Otodus megalodon along … [+] with hypothetical silhouettes of the shark at birth and death, each compared with size of typical adult human. The vertebral specimen is housed in the Royal Belgian Institute of Natural Sciences in Brussels

Adult Megalodons could go on to become about 15 meters (50 feet) in length when fully grown.

Fortunately for us, and contrary to some Hollywood-fueled nightmares, Megs haven’t plied this planet’s waters for the past few million years, at least.

To determine the details of the cartilaginous monster’s life cycle, scientists took a close look at some vertebrae from the ancient species. In particular they looked at growth bands within the bones, which is sort of like looking at the rings of a tree. This allowed the researchers to calculate how large the sharks were at birth.

The results imply that baby Megalodons were the largest infants in the shark world.

In addition to their size, the research found that the huge sharks also had longevity on their side, living perhaps as long as 100 years.

That’s a full century to terrorize the seas per Meg. Easy to see why they make for such great action movie fodder.