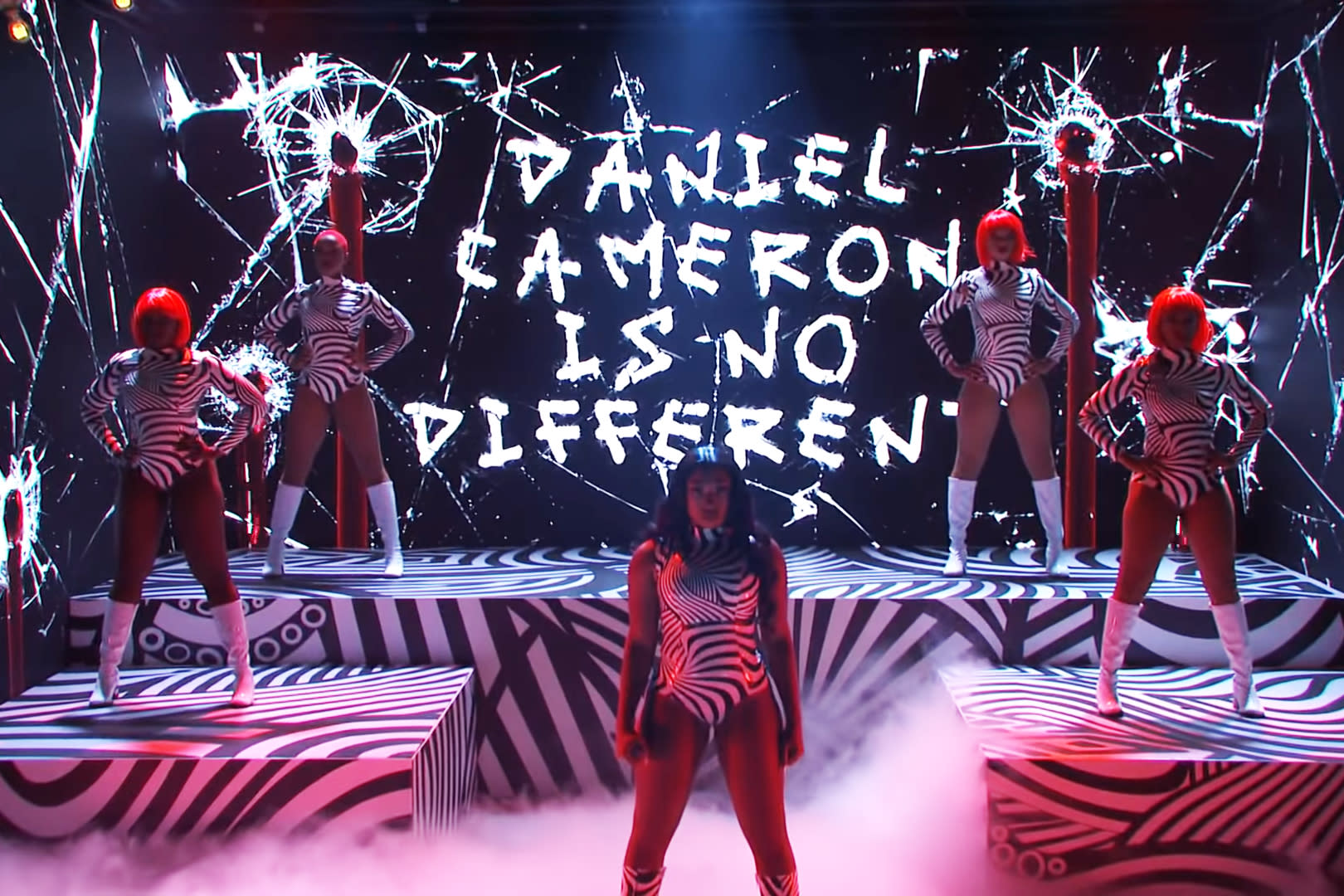 The rapper performed her hit song “Savage” as she and the small musical stage were covered in hypnotic black and white imagery, with the phrase “Protect Black Women” displayed on a backdrop.

About halfway through the performance, Megan and her dancers paused while audio was played of Malcolm X, from a speech in which he called Black women the most “disrespected, “unprotected,” and “neglected” people in America.

Then a different audio clip played which attacked Kentucky Attorney General Daniel Cameron, who has been criticized by activists and Taylor’s family for his handling of the case against the Louisville police officers who fatally shot the 26-year-old Black woman.

“Daniel Cameron is no different than the sellout negroes that sold our people into slavery,” the audio said. The quote was from civil rights activist Tamika Mallory, according to Louisville NBC affiliate Wave 3.

Megan then made her own statement about racial inequality in America.

This summer’s protests, in the streets and on social media, reignited conversations on the pervasiveness of racism and systemic inequality. A number of Black men and women who were killed this year, including Taylor in Louisville and George Floyd in Minneapolis, have sparked demonstrations around the nation and world.

Taylor was an emergency medical technician who was in her apartment on March 13 with her boyfriend Kenneth Walker when Louisville officers executed a search warrant on her home after midnight. Her name was listed on the warrant because police believed that a suspect, her ex-boyfriend, had used her home to keep drugs or stash money.

There were no drugs or money found by officers in the raid and Taylor did not have a criminal record.

There have been conflicting accounts as to whether officers announced themselves as they banged on Taylor’s door that night. Walker said that neither of them had heard police identify themselves and several neighbors have said they did not hear a police announcement either.

Officers said they did not execute the search as a no-knock warrant, identified themselves and then broke down the door after no one came to answer. Cameron said one civilian witness told police they heard officers announce themselves.

According to Walker’s account, he and Taylor feared her home was being broken into that night, so he fired a single shot at the door to defend themselves. The shot hit one of the officers in the leg. Walker initially said Taylor fired the gun, but then said he fired the shot, according to newly released grand jury recordings.

Police then began to fire several rounds into Taylor’s home and Taylor was killed in the raid.

None of the officers who fired their weapons — including the officer who Cameron says fired the fatal shot, Detective Myles Cosgrove — were charged with Taylor’s death. Only former officer Brett Hankison, who was fired in June, was charged at all, with wanton endangerment for firing blindly into an apartment and recklessly endangering Taylor’s neighbors.

He pleaded not guilty to the charges Monday.

Grand jury recordings were put into the public record on Friday as part of a judge’s order in Hankison’s criminal case, a rare look into a process normally shrouded in secrecy. The recordings do not include juror deliberations and prosecutor recommendations and statements, “as they are not evidence,” Cameron’s office said.

The recordings are approximately 15 hours long and cover the grand jury’s sessions from Sept. 21 through Sept. 23. The recordings paint a chaotic scene of that night, with one detective saying there was no formal plan for the raid’s execution.

Cameron had initially said in his statements after the grand jury’s indictment of Hankison that he had walked jurors “through every homicide offense, and also presented all of the information that was available to the grand jury.”

But in a statement Monday, Cameron revealed that the only charge he recommended to the grand jury was wanton endangerment.