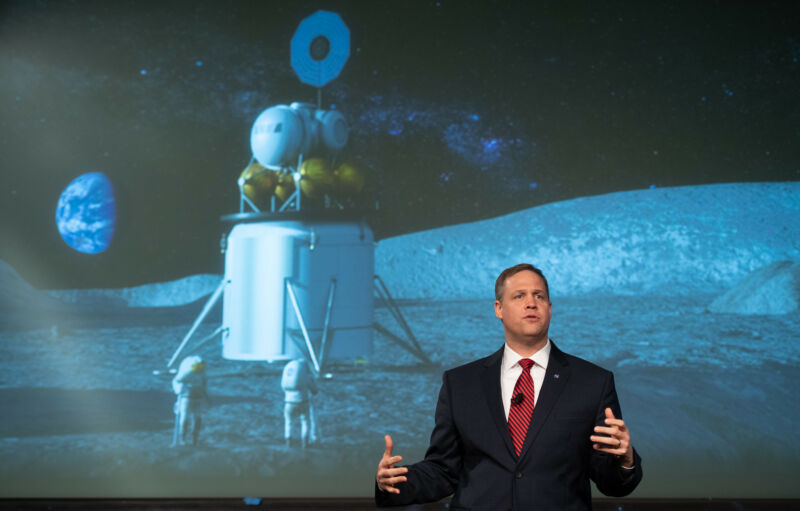 The odds of NASA sending humans back to the Moon by 2024 are long—not zero, but pretty close.

Probably the biggest near-term impediment the space agency faces is funding. Specifically, NASA requires an additional $3.2 billion in fiscal year 2021 to allow contractors to begin constructing one or more landers to take astronauts down to the Moon’s surface from a high lunar orbit. This is a 12 percent increase to NASA’s budget overall.

The 2021 fiscal year begins in a week, on October 1. The US Congress recently passed a “continuing resolution” that will keep the government funded through December 11. By that time, after the 2020 election, it is hoped that the House and Senate can agree on a budget that would fund priorities for the remainder of the fiscal year.

NASA Administrator Jim Bridenstine said this week that funding the Artemis Moon Program before the end of this year would be workable. “If we can have that done before Christmas, we’re still on track for a 2024 Moon landing,” he said in a call with reporters.

The real question is whether Congress, if it can agree on a fiscal year 2021 budget in this sharp partisan era, is so inclined to support funding for the lander. This is a brand-new program that will eventually require many billions of dollars to reach fruition. In deliberations earlier this year, the US House provided only $600 million, or less than one-fifth of the budget NASA said its needs for the coming year.

So says the Senate

Wednesday provided the first opportunity to assess, publicly at least, whether the Senate will be more supportive of the Artemis Program and its aggressive 2024 goal.

In his opening statement, the Kansas Republican who chairs the Senate subcommittee that oversees NASA’s budget, Jerry Moran, had kind words to say about Artemis. But he noted that NASA’s request for a larger budget came amidst the backdrop of a pandemic and resulting financial crisis.

“Our world has significantly altered since the initial release of the budget, and I look forward to discussing how NASA is adapting to our new and unprecedented environment while pushing forward with Artemis,” Moran said.

The ranking Democratic member of the committee appeared to be even less supportive. New Hampshire’s Jeanne Shaheen noted that NASA’s proposed budget again cut funding for STEM education and did not support the Nancy Grace Roman Space Telescope. “We know that NASA needs to be about more than just a single Moonshot,” she chided Bridenstine. Shaheen characterized the 12 percent budget increase sought as “generous.”

Later during a question-and-answer period, Moran asked Bridenstine whether it might be more practical for NASA to quickly pick a single contractor to build the lander so the agency could concentrate its resources.

Bridenstine pushed back on this, citing the value of competition. Earlier this year, the space agency selected three teams—led by Blue Origin, Dynetics, and SpaceX—to flesh out lander proposals and tell NASA how much government funding they thought would be needed to complete the projects by 2024. With this information, NASA plans to “down-select” from this initial group of three landing teams in February.

There has been chatter in the aerospace community, in recent months, that one or more of the lander teams are pushing for all of the funding in this February down-select by intimating that the other teams cannot possibly meet the technical challenge.

But Bridenstine seems committed to moving forward with two or more teams. “I worry about going down to one,” he said. “When you eliminate the competition, you end up with programs that inevitably get dragged out and face cost overruns.” With at least two providers competing, Bridenstine said, NASA would end up in a “virtuous cycle” where the teams are investing their own money and pushing as hard as they can.

For a recent model of success, he cited the commercial crew program, in which SpaceX and Boeing competed to fly astronauts to the International Space Station. SpaceX won that competition and did so within the “fixed price” contract NASA awarded it back in 2014. Having two competitors spurred the companies to keep moving despite the technical challenges, Bridenstine said.

As they consider whether to fund Artemis, lawmakers will finally have some hard numbers to consider for the program. In an “Artemis Plan” document released Monday, NASA for the first time put specific dollar figures to the projected cost of landing on the Moon by 2024: $27.9 billion. $16.1 billion of that would go toward the cost of developing an “initial” Human Landing System. These are the funding requirements through fiscal year 2025.

A La Niña winter is on the way for the US