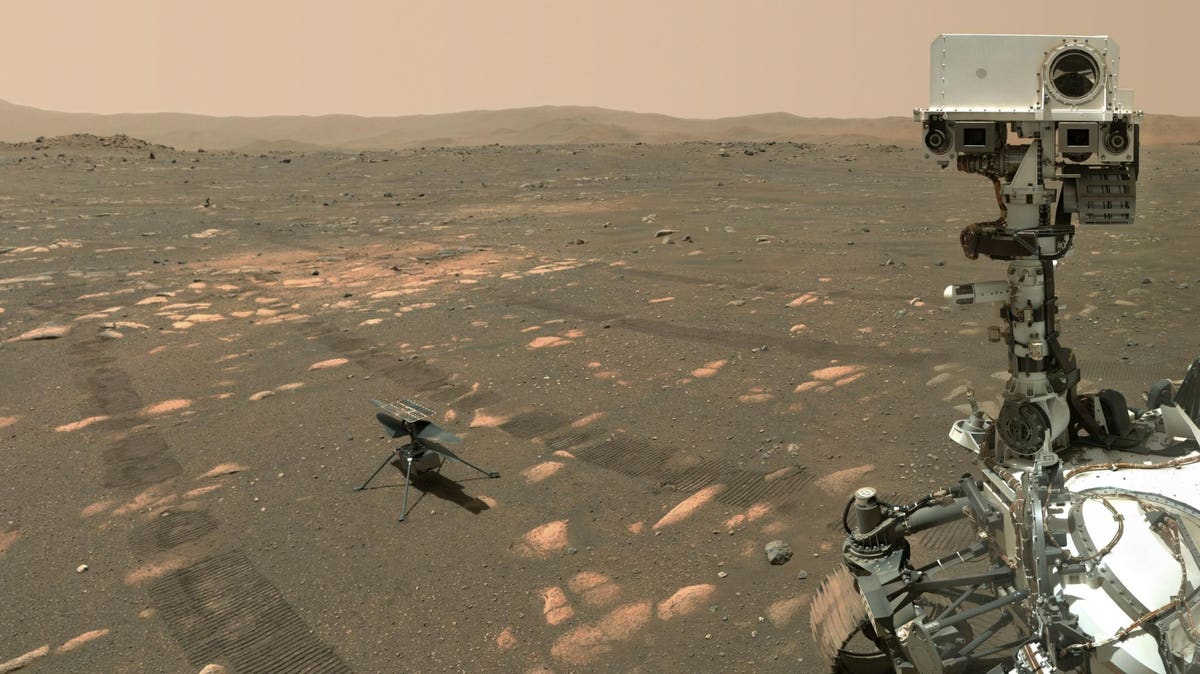 After a false start featuring a failed takeoff, NASA’s Ingenuity Mars Helicopter completed its fourth successful flight on April 30th, flitting about above the surface of the dusty volcanic orb it now calls home.

It wasn’t entirely clear what the venerable space agency was planning for the copter beyond this point. Far from being a full-blown exploration contraption, this was an experimental stowaway that hid inside the underbelly of the Perseverance Rover. That nuclear-powered rover is the real star of the show, the start of an eleven-year plan to return pristine Martian rocks to Earth. Ingenuity is a prototype drone, one that aimed to demonstrate that powered flight on Mars was possible, despite the very thin atmosphere making levitation far more difficult than it is in our beautiful, azure skies.

The general idea with each successive flight was to push the copter to its limits, trying out more complex aerial manoeuvres and travelling further from Perseverance. Ultimately, Ingenuity was (reasonably) expected to crash into the ground after being pushed too far. But it now seems that the first machine capable of controlled powered fight on another world is being repurposed, giving it something more cooperative and constructive to do before it ends up as mechanical debris in the dust.

“The Ingenuity technology demonstration has been a resounding success,” said Thomas Zurbuchen, associate administrator for NASA’s Science Mission Directorate, in a statement following the fourth flight. “Since Ingenuity remains in excellent health, we plan to use it to benefit future aerial platforms while prioritising and moving forward with the Perseverance rover team’s near-term science goals.”

Two more test flights will be entered into the logbooks over the next two weeks, with Ingenuity engaging in some more of its aerial photography. After that, presuming the solar-powered drone remains healthy, Ingenuity will stop being a mere demonstration of prototypical technology and start helping out with Perseverance’s operations. It will scout ahead of Perseverance, giving scientists back home a sneak preview of what the rover’s future sites of geological investigation will look like, perhaps even helping the rover navigate the forthcoming terrain. Its camera systems will allow it to take multiple shots of the same object from different angles, permitting the development of 3D digital elevation maps.

None of this will significantly bolster Perseverance’s rock-poking work, but it’s a good way to test out features that will one day become a prominent feature of scientific exploration on Mars. But if you can’t wait for the future to arrive, head on over to Iceland. There, over the next couple of years, scientists will be testing out the next generation of off-world rover and drone technology.

The prototype rover, already capable of full autonomy, will be not just accompanied by drones, but led by them. Said drones will fly across the frigid volcanic Icelandic landscape (one fairly comparable to Mars’), snap photographs of the soil below, build 3D maps of the terrain ahead, and send driving instructions back to the rover. They will also land at sites of scientific interest and use claws and drills to sample the sites themselves, bringing those samples back to the rover for a more detailed scientific analysis. If things look promising, the rover will then head to the site to conduct a more thorough investigation. Perhaps one day, there will be no rover; instead, astronauts will be scouting out the Martian realm themselves using their very own smart drones.

That work in Iceland is one of several technological previews of what may come to pass on the crimson orb next door, and it’ll be a fair few years before we see any of it working on Mars for real. For now, let’s be content with the remarkable work of the Ingenuity team, its engineers and pilots alike, and applaud them for marking the start of a bold new chapter in planetary science.