Nearly 90,000 cases in a day: Pandemic skyrockets in third, highest peak yet 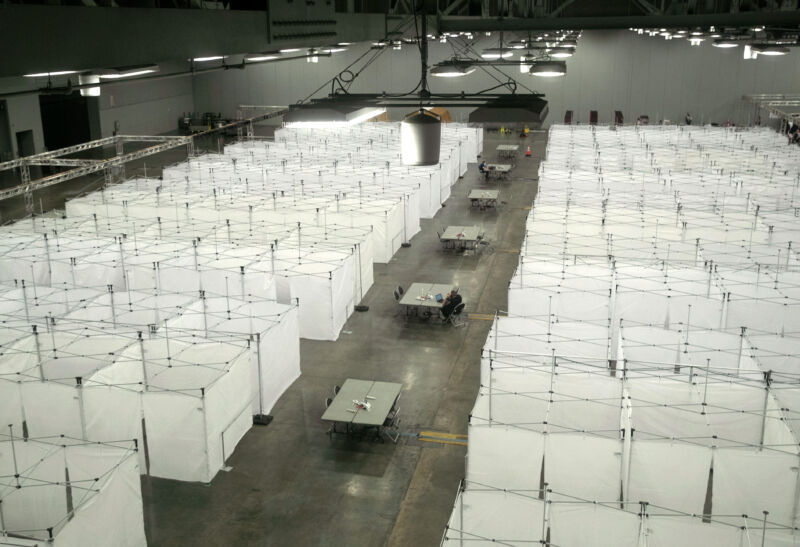 Enlarge / Some 250 Covid-19 isolation bays stand at the ready at the Austin Convention Center on August 07, 2020 in Austin, Texas. The cavernous facility was prepared for use as a field hospital for Covid-19 patients.
Getty | John Moore

With more than 88,400 cases Thursday, the US is expected to easily surpass 9 million cases total Friday. Deaths are likely to near 30,000.

Unlike in the past pandemic peaks—in which the highest levels of virus transmission were concentrated in specific areas and states—the current surge in cases is driven by diffuse spread. Cases are up in every region, according to The COVID Tracking Project. Twenty-five states have set new daily records for cases in the last two weeks, including 17 states with new records since last Wednesday, the project notes. The project also emphasized that increases in testing do not explain the surge, with 47 states and the District of Columbia seeing cases rise faster than rises in testing.

As such, test positivity rates are also at jaw-dropping highs, according to data compiled by Johns Hopkins University researchers. South Dakota is reporting a positivity rate of 46 percent—that is, of all the coronavirus tests run in the state, 46 percent are found to be positive. For reference, the World Health Organization recommends positivity rates should be 5 percent or lower for 14 days before governments consider reopening. Idaho, Wyoming, and Iowa all have positivity rates of 30 percent or higher.

Hospitalizations are also rising nationally, with more than 46,000 people in the US hospitalized with COVID-19 as of Thursday. Several states are already seeing hospitals strained by the surge in cases. With peaks in cases and hospitalizations, experts expect a devastating uptick in deaths will follow in the coming weeks.

The burst in cases comes just days before the presidential election. President Trump and his administration have been heavily criticized for their handling of the crisis. Trump himself has admitted to downplaying the virus, despite knowing its severity. He and his staff have been lackadaisical about wearing masks and following distancing and quarantine measures. There have been several coronavirus outbreaks at the White House and among administration staff.

Despite the record-high levels of cases, Trump continues to claim that the pandemic is almost over and that the country is “rounding the corner.” (We are not.) Amid the nationwide surge, cases are rising in every swing state, according to tracking by The Washington Post. Michigan, Ohio, Pennsylvania, and Wisconsin in particular are seeing major upticks in cases, The COVID Tracking Project adds. Hospitalizations are up 96 percent or more in all four states.

2020 Needs A Dramatic End, Right? This Is How A ‘Beaver Moon’ Will Countdown To A Jaw-Dropping Sight

Ask Ethan: How Did The Entire Universe Come From Nothing?