The first Pixel 5 teardown to hit the Internet is from PBKReviews, which gives us a fun look at the guts of Google’s latest flagship smartphone.

There is a lot about the Pixel 5 construction that is pretty different. The first is the screen retention technique, which uses both glue and rectangular clips. You’ll need to both heat the phone up and pry out all the little tabs—hopefully without breaking them—in order to get at the inside of the phone. Compared with an iPhone 12, which uses glue and two screws at the bottom of the phone, or a Samsung phone, which is all glue, this is certainly unique. Whatever Google’s plan was for holding the screen on, it doesn’t seem to be working very well, as there are already reports of uneven gaps forming between the phone’s frame and display.

The next Pixel oddity is the lack of a traditional earpiece. Instead, the phone has an under-display speaker toward the top of the display. It serves double-duty as the “stereo” speaker along with the normal speaker on the bottom of the phone. Under-display earpieces vibrate the display to play sound but usually sound pretty tinny.

While some higher-end Snapdragon 865 phones have big, fancy heat pipes in them now, the Pixel 5 just has a big slab of metal on top of the motherboard for heat dissipation. There’s also graphite tape between the battery and the aluminum body. 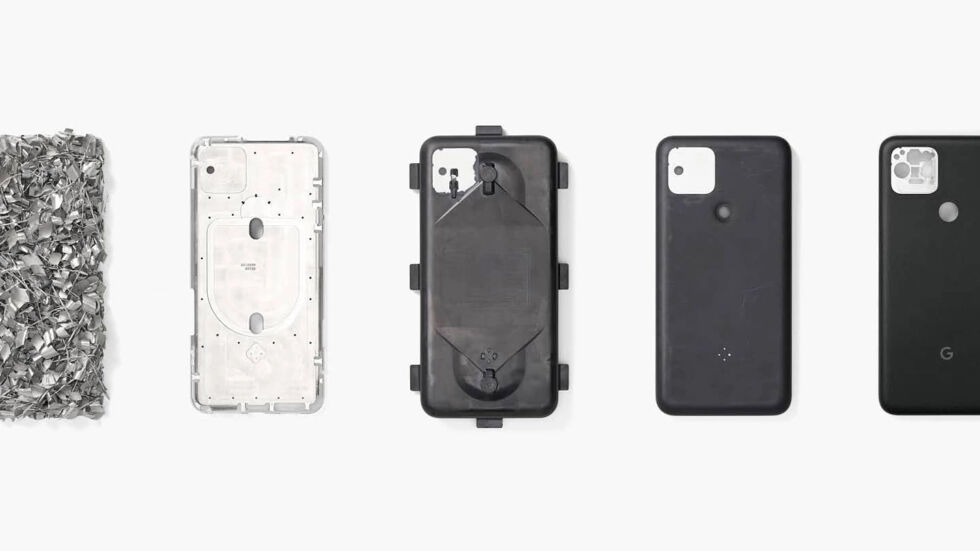 Enlarge / Google’s picture showing the steps in the Pixel 5 build process. The second from the left shows the bare aluminum body, which has a ton of holes punched in it for wireless charging and mmWave. From there, it goes in a mold and gets covered in resin.
Google

The Pixel 5 is a rare phone (the first?) to have both a metal body and wireless charging, which was a bit of a mystery at launch. Years ago, the industry switched from metal backs to glass in order to facilitate wireless charging, since the RF signals couldn’t penetrate metal. Unfortunately, the teardown doesn’t go into details, but Google’s press kit shows what a bare-aluminum Pixel 5 shell looks like, and Google’s solution to balancing metal and various RF requirements is pretty simple: just cut holes in the aluminum body wherever you need to let some signal out.

The back of the phone body has two big holes cut out of it for wireless charging, and you can see big chunks missing from the top and the side, which lines up with where the mmWave 5G antennas go. To stop the phone from looking like swiss cheese, the whole metal body goes in a mold (that tab-covered black thing) and is covered in resin.