SYDNEY, AUSTRALIA – JANUARY 10: Mohammed Siraj of India and team mates look at spectators following … [+] a complaint made by Siraj about the crowd in the bay behind him during day four of the Third Test match in the series between Australia and India at Sydney Cricket Ground on January 10, 2021 in Sydney, Australia. (Photo by Cameron Spencer/Getty Images)

Play on Day Four of the Test Match between Australia and India has been halted after Indian fast bowler Mohammed Siraj was allegedly racially abused by spectators at the Sydney Cricket Ground (SCG).

Siraj could be seen in the outfield gesticulating at unknown persons in the stands when his captain, Ajinkya Rahane intervened. Jasprit Bumrah was midway through his run-up to bowl when Rahane called him off.

Rahane walked over to the square-leg umpire, Paul Reiffel, to remonstrate, causing Reiffel to stop play and contact security. As staff at the SCG scrambled to identify the alleged culprits, TV cameras showed Siraj looking visibly shaken by what had occurred.

The Indian bowler, who is making only his second Test appearance, seemed to identify the culprits and, after a prolonged delay, police marched six young men from the stadium.

The incident comes fresh on the back of complaints of similar abuse that were made last night after Day Three had ended. Sirah and Bumrah informed the Indian team management that they had been abused, causing an official complaint to be lodged. 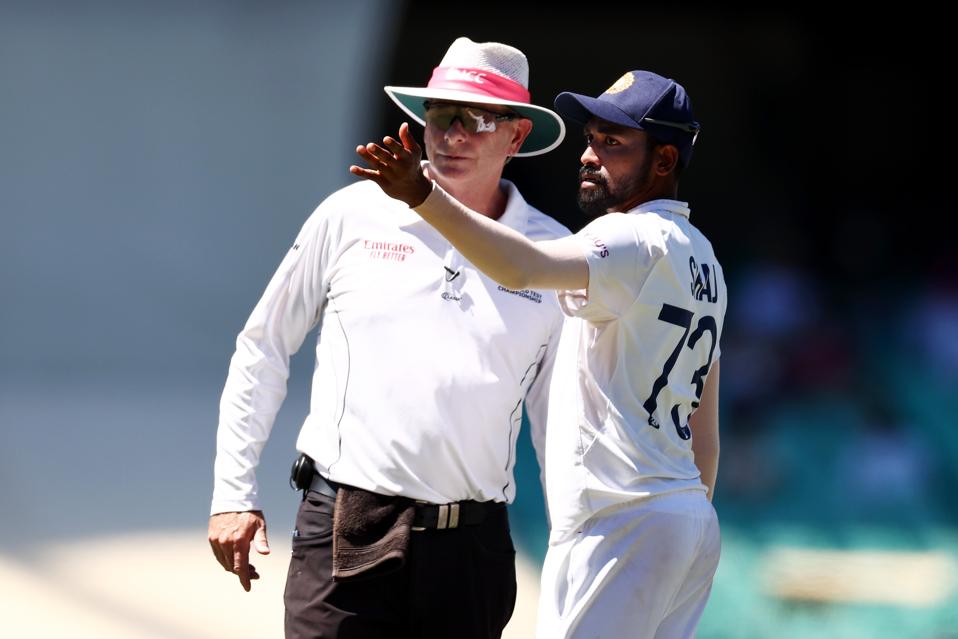 SYDNEY, AUSTRALIA – JANUARY 10: Mohammed Siraj of India stops play to make a formal complaint to … [+] Umpire Paul Reiffel about some spectators in the bay behind his fielding position during day four of the Third Test match in the series between Australia and India at Sydney Cricket Ground on January 10, 2021 in Sydney, Australia. (Photo by Cameron Spencer/Getty Images)

“Cricket Australia (CA) has reaffirmed its zero-tolerance policy towards discriminatory behaviour in all forms following the alleged racial abuse of members of the Indian cricket squad by a section of the crowd at the Sydney Cricket Ground on Saturday,” said a statement from the Test organizers.

“Cricket Australia condemns in the strongest terms possible all discriminatory behaviour,” said Sean Carrol, Head of Integrity and Security at Cricket Australia. “If you engage in racist abuse, you are not welcome in Australian cricket.”

“CA is awaiting the outcome of the International Cricket Council’s investigation into the matter reported at the SCG on Saturday. Once those responsible are identified, CA will take the strongest measures possible under our Anti-Harassment Code, including lengthy bans, further sanctions and referral to NSW Police.”

“As series hosts, we unreservedly apologize to our friends in the Indian cricket team and assure them we will prosecute the matter to its fullest extent.”

Local government officials said that security camera footage from the SCG was being studied to help identify the culprits. Given the 25% capacity enforced due to COVID-19 restrictions, few fans were in the area at the time.

“At the SCG, we pride ourselves on welcoming anyone and everyone in a safe and inclusive environment,” said Kerrie Mather, Venues NSW’s Chief Executive.

“We are taking this extremely seriously. If those involved are identified, they will be banned from the SCG and all Venues NSW properties under our Act.”