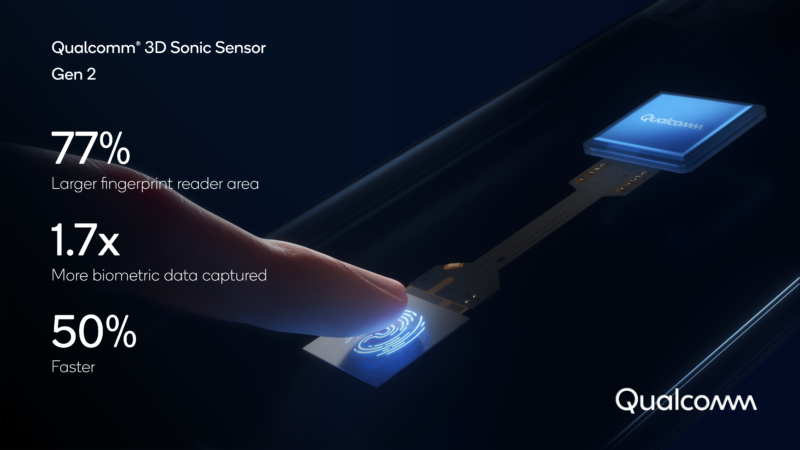 Enlarge / A very exaggerated image of Qualcomm’s sensor. It is not this big.
Qualcomm

Qualcomm is launching a new in-screen fingerprint sensor for smartphones, the “Qualcomm 3D Sonic Sensor Gen 2.” Qualcomm says its ultrasonic fingerprint sensor “will be available in new sizes that are 50% faster and 77% larger compared to Gen 1,” but it still seems pretty small compared to a fingerprint. Just as the Gen 1 version appeared in the Galaxy S10 and S20, there’s a good chance you’ll see this sensor in the upcoming Galaxy S21.

In-screen fingerprint readers can be fast, accurate, and reliable, provided you actually hit their center, which can be a challenge. Being under a smooth, flat pane of glass means there’s no tactile guidance for where to stick your finger. Early generation fingerprint readers have been pretty small, requiring pinpoint accuracy to hit the sensor. An in-screen fingerprint reader big enough to never miss, even without looking, would be a huge improvement, and while we’ve seen companies talk about a product like that, no one has shipped one to the market.

In December 2019, Qualcomm made it sound like it had met the goal of making a huge fingerprint reader by announcing the “3D Sonic Max.” It sounded like a revolution, with a claimed 30mm×20mm surface area, which is so big it was possible to scan two fingerprints side by side. I don’t think you’d ever want to do that, but the point is just that you would never miss the scanning area because it is so large. The 3D Sonic Max has yet to see a commercial release, but Qualcomm tells us it will ship in a product before the end of 2021.

Enlarge / Qualcomm’s first-gen sensor in the Galaxy S10, next to a fingerprint. The S20 had the same sensor.
Ron Amadeo

With OEMs dragging their feet on major leaps in fingerprint reader size, maybe incremental change will get Qualcomm more customers. I measure my fingertip at about 14mm×14mm, but Qualcomm’s first-gen sensor, available on the Galaxy S10 and S20, only measures a sliver of your fingerprint, with a 9mm×4mm scanning area. At only 8mm×8mm, this second-gen version is still not what I would call a “full fingerprint” sensor, but there is a bigger vertical target now. Qualcomm’s art, above, seems to greatly exaggerate the scale of the sensor relative to a finger, showing what I would measure closer to a 20mm×20mm sensor.