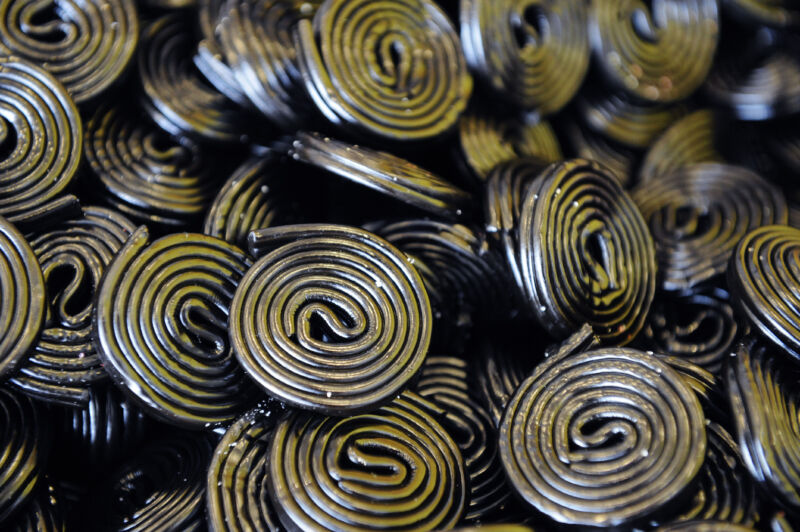 Because 2020 hasn’t provided enough extraordinary ways to die, the universe offers a grim reminder that eating too much licorice candy can be deadly.

A 54-year-old construction worker died in Massachusetts recently after eating an excessive amount of black licorice—which naturally contains a toxin called glycyrrhizin, aka glycyrrhizic acid. Doctors published a case study of his poisoning in the New England Journal of Medicine this week.

According to the study, the poor fellow was at a fast-food restaurant when he abruptly went into cardiac arrest. He “gasped suddenly, with full-body shaking and loss of consciousness,” the doctors report. Paramedics arrived within minutes and revived him with four shocks and CPR. But when he was admitted to the hospital about 30 minutes later, doctors found he had multi-organ failure, “profound metabolic derangements,” dangerously low levels of potassium in his blood, and cardiac arrest associated with ventricular fibrillation, which is when the lower chambers of the heart twitch erratically without pumping blood. All of these conditions are consistent with licorice poisoning.

A thorough medical investigation noted he seemed to have no previous history of heart problems and doctors pinned his conditions to the candy. Discussions with his family revealed he had been eating one to two “large” bags of black licorice every day for about three weeks before his heart stopped. By the time he arrived at the hospital, too much damage had already been done. He died about 32 hours later, with his family at his bedside.

Medical researchers have long known about the licorice plant’s complex and toxic effects on the human body.  Licorice has a storied and twisting history in Eastern and Western cultures, stretching back to the Babylonian and Egyptian empires. Hippocrates prescribed it in the treatment of asthma and dry coughs. Chinese traditional medicine has used licorice to treat conditions from tuberculosis to peptic ulcers.

But these uses were not without side effects. In the 1950s, Dutch-physician scientist, F. E. Revers conducted one of the first systematic studies of licorice extract’s anti-ulcer effects and noted that patients suffered swelling, “violent headache,” high blood pressure, and chest pain and pressure.

In subsequent decades, researchers worked out that the glycyrrhizin in licorice is taken up by microbes in the intestines and converted to glycyrrhetinic acid (aka glycyrrhetic acid). This metabolized version is then absorbed by the body. In the kidneys, glycyrrhetinic acid derivatives hamper a critical enzyme called 11β‐hydroxysteroid dehydrogenase type 2, or 11βHSD2, which converts the steroid hormone cortisol to cortisone. Cortisol has many important functions, including being a critical regulator of ion, salt, and water balance. This in turn, significantly affects blood volume, blood pressure, and overall functioning of the cardiovascular system.

With 11βHSD2 blocked by glycyrrhetinic acid, cortisol levels build up within the kidney. This leads to higher levels of sodium, water retention, a plunge in potassium levels, and a subsequent cascade of life-threatening problems in the body, including kidney failure. The increase in sodium and water retention leads to swelling and high blood pressure. The extreme drop in potassium levels (hypokalemia) throws off the ionic balance critical to the cardiac conduction system—which is a specialized group of heart muscle cells that use electrical signals to make the heart muscles contract and pump blood around. As such, drops in potassium levels can lead to fatal irregular heart rhythms, such as ventricular fibrillation.

To make matters worse, glycyrrhetinic acid also interferes with enzymes in the liver that influence aldosterone levels, another critical steroid hormone—which exacerbates all the other health effects of the toxin. The liver also recirculates glycyrrhetinic acid, meaning high levels can accumulate after frequent licorice consumption and remain high for long periods. It can take weeks for symptoms of licorice poisoning to go away.

For these reasons, medical researchers and health agencies warn against eating a lot of black licorice—at once or and/or on a daily basis. In fact, the US Food and Drug Administration typically likes to remind consumers of the life-threatening risk around Halloween each year (although that is, sadly, unnecessary this year).

In past warnings, the FDA notes: “If you’re 40 or older, eating 2 ounces of black licorice a day for at least two weeks could land you in the hospital with an irregular heart rhythm or arrhythmia.”

Still, because black licorice is not a terribly popular candy and few people indulge in sufficiently toxic amounts, the gummy sweets aren’t a menace to public health. (Also not all “licorice” candies actually contain licorice plant extract, including many red licorice candies, like red Twizzlers.) Reports of illnesses are rare, let alone deaths. Some of the few examples of harms include a reference from the FDA of a “black licorice aficionado” who “had a problem” after eating the candy in 2016. In 1977, researchers reported the case of a 58-year-old woman who was eating  a whopping 1.8 kilograms (about 63.5 ounces) of black licorice per week and went into cardiac arrest. But, she survived the cardiac arrest and recovered completely after she stopped eating licorice.

The poor fellow in Massachusetts was not so lucky. Though doctors were able to get his potassium levels up with large, intravenous doses of potassium chloride, his condition worsened. His blood pressure became unstable, his neurological prognosis was poor, and his kidneys were failing. He was moved to comfort measures before he died peacefully with his family.