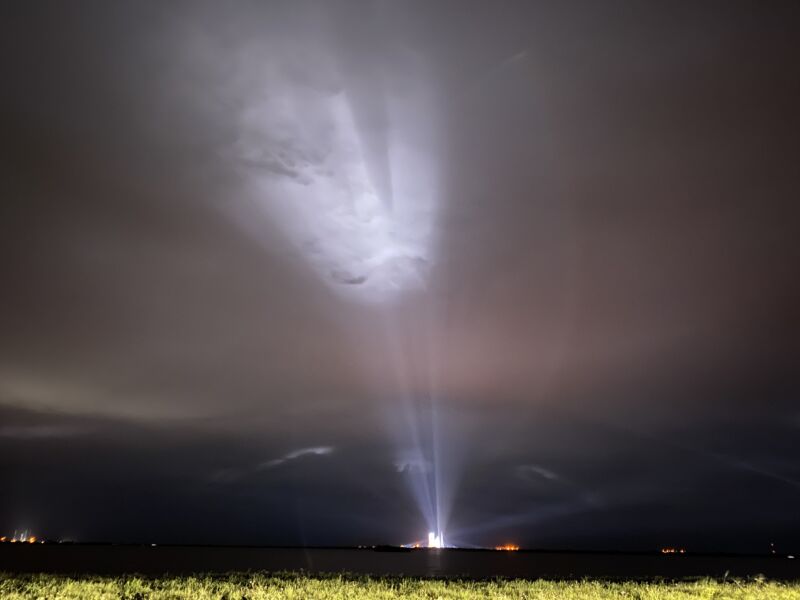 Enlarge / The Delta IV Heavy rocket lit up the night sky on Wednesday night, but not by launching.
Trevor Mahlmann / Ars Technica

Welcome to Edition 3.18 of the Rocket Report! I’m thrilled this week to announce that I’ve written a book about the origins of SpaceX. It focuses on the Falcon 1 rocket, Elon Musk, and the early employees who carried out his vision. I spent oodles of time with Musk, who was expansive about those early years.

But just as importantly, I talked to dozens of the first SpaceX employees about those desperate days. Liftoff tells their story, and it is one hell of a tale. The book will be published by William Morrow on March, 2, 2021. You can preorder now.

An important engine … HyImpulse is developing its three-stage “SL1” launch vehicle designed to carry payloads of up to 500kg to Sun-synchronous orbit. The rocket will be powered by 12 identical 16,800 lbf hybrid rocket motors—eight on its first stage, and four on its second stage—plus four smaller versions of the engines powering its third stage. (submitted by platykurtic and Ken the Bin)

Another German startup picks a launch site. Rocket Factory Augsburg AG has signed a Memorandum of Understanding with Norway-based Andøya Space to implement a launch site for the RFA One rocket and provide end-to-end launch services for small satellites. “This partnership is pivotal, it allows RFA and Andøya to launch the first satellite into orbit from continental Europe with an European launcher” said Dr. Stefan Brieschenk, Chief Operation Officer of RFA, in a news release.

A bigger small rocket … The startup is backed by the German satellite manufacturer OHB as a strategic investor and by Munich-based venture capital firm Apollo Capital Partners. Rocket Factory is currently building the RFA One booster to deliver up to 1.5 metric tons to low Earth orbit. The first launch is scheduled for 2022. There is an interesting, ongoing race in Germany among small-launch startups including RFA, HyImpulse, and Isar Aerospace. (submitted by Ken the Bin)

Space becomes a bona fide political issue in Australia. We are not on top of Australian politics, but the opposition Liberal National Party of Queensland is apparently running on a platform that includes the accelerated development of a spaceport on islands along the country’s northeast coast. Opposition leader Deb Frecklington has pledged $15 million to build an orbital rocket launch site at Abbot Point in north Queensland, the Brisbane Times reports.

Gotta go fast … The Labor government is moving too slowly on the project, opponents say. An LNP government would start building the government-owned site next year, which would create 100 construction jobs, Frecklington said, and another 200 jobs would come from securing Gilmour Space Technologies as the anchor tenant. “This means that we can launch rockets that have satellites into space from right here in Queensland,” she said. “Make no mistake, if these rockets with their satellites are not launched from Queensland, they are going to be launched out of Cape Canaveral in the US.” Or, presumably, New Zealand. (submitted by Cognac)

Maine company sets launch date for small rocket. Brunswick-based bluShift Aerospace plans to launch its 20-foot rocket in October. The launch location, at the site of a former Naval Air Station, is in far northern Maine. The company is targeting October 21 for the launch of its Stardust rocket to an altitude of 4,500 feet.

Showing, not telling … The company is developing biofuel rockets, and this test will provide data about the performance of this fuel. “We learned early on in our research and development that having an engine that used a green fuel was not enough to inspire investment,” bluShift CEO Sascha Deri told the Times Record. “We had to demonstrate that we could match or beat the petroleum alternative.” We wish them luck! (submitted by Jenming)

Another honorary name … The company says it is developing three rockets—the Vikram I, Vikram II, and Vikram III—to serve the small-satellite launch market. The smallest rocket will have a capacity of 225kg to a Sun-synchronous orbit while the largest will carry up to 580kg. The launch vehicles are named for Vikram Sarabhai, who is known as the father of Indian space program. (submitted by Ken the Bin and platykurtic)

Speaking of Indian launch history. If you’re like me, you probably don’t know all that much about India’s history with regard to space and launch. (I can barely keep my US and Soviet history straight). However, if you’re into podcasts, there’s a fascinating new one titled Mission to ISRO that dives deep into this past.

Great context for modern-day activity … Narrated by Harsha Bhogle, the podcast is targeted for those with a basic knowledge of space history but no knowledge whatsoever of Indian launch history (raises hand). So if you’re wondering who Vikram Sarabhai was and why an Indian startup is naming rockets after him, this a good place to start. I’ve been loving it. Alas, it’s exclusive to Spotify.

Space Force agrees to fly on used Falcon 9s. Last Friday, the US Space Force said it would launch two critical Global Positioning System missions on used Falcon 9 rockets next year, Ars reports. Doing so will save the military $52 million, officials said, as SpaceX agreed to lower compensation for the two missions in return for flying used hardware.

A continuing journey … This represents a significant step by the Space Force toward validating the use of flight-proven first stages of a rocket for the most critical national security missions. “We’re looking forward to this journey with SpaceX as we get even more experienced with them and reusable hardware,” said Walter Lauderdale, Space and Missile Systems Center Falcon Systems and Operations Division chief, in a call with reporters.

Next Crew Dragon launch moves to Halloween. NASA and SpaceX now are targeting 2:40am ET (06:40 UTC) on Saturday, October 31, for the launch of the agency’s SpaceX Crew-1 mission with astronauts to the International Space Station. This is an eight-day slip from the previous date but is not due to a hardware issue, the space agency said.

Closing open work … Rather, NASA sought to deconflict the Crew-1 launch and arrival from upcoming Soyuz launch and landing operations. This additional time is needed to ensure closure of all open work, both on the ground and aboard the station, ahead of the Crew-1 arrival. In the coming weeks, Ars will have more on this exciting mission carrying four astronauts. (submitted by TFargo04, Ken the Bin and platykurtic)

DARPA awards contract for nuclear-thermal rocket. The Defense Advanced Research Projects Agency has awarded a $14 million task order to Gryphon Technologies, a company in Washington, DC, to design a nuclear thermal rocket for cislunar operations, Space.com reports. This was the result of a contracting process that opened in June.

A lot of work ahead … The money will support DARPA’s Demonstration Rocket for Agile Cislunar Operations program, whose main goal is to demonstrate a nuclear thermal propulsion system in space. “We are proud to support DRACO and the development and demonstration of NTP, a significant technological advancement in efforts to achieve cislunar space awareness,” Gryphon CEO PJ Braden said. (submitted by Rick)

Math Shows How The Composition Of Landscape Paintings Changed Over Time

Alexandra Cousteau Wants To Restore The Oceans By 2050

Apple’s iPhone 12 Will Cause Serious Problems For Samsung, Google