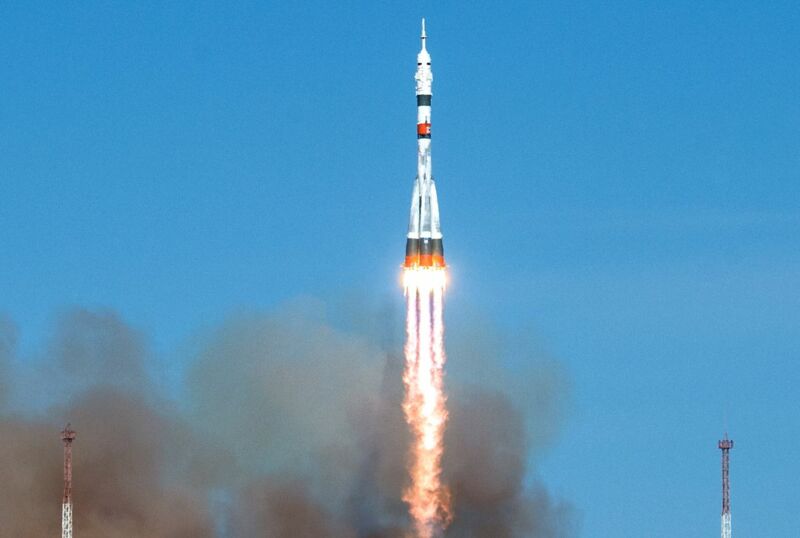 Welcome to Edition 3.20 of the Rocket Report! As usual, there is a lot of news this week in the world of lift. We also have the prospect of two Starlink launches in three days, beginning Sunday. Of course, we’ll have to see what Scrubtober thinks about this.

New Shepard flies again after 10 months. Blue Origin’s New Shepard launch system returned to flight on Tuesday, conducting the 13th overall mission of the vehicle. The vehicle carried 12 commercial payloads to the edge of space and back, including a NASA-developed sensor suite that could enable future lunar landing craft to perform safe and precise touchdowns on the surface of the Moon, NASASpaceflight.com reports.

And people, when? … The flight-test campaign for New Shepard began in April 2015 and has been going on for more than five years. During the nearly hour-long webcast surrounding the launch, the hosts did not have much to say about when humans may first fly inside the capsule, which was developed to serve as a platform for suborbital space tourism. Blue Origin also has yet to begin selling tickets. (submitted by platykurtic and Ken the Bin)

A path to profit? … Ars has previously reported that Virgin Orbit has spent more than $500 million developing the LauncherOne rocket, and there are questions about how Virgin can ever recoup that investment. The new funds would likely cover operational costs for 18 to 24 months, allowing the company to reach orbit and some sort of operational cadence.

Sweden steps up commitment to its Esrange. On Wednesday, the Swedish government announced it intends an “extensive modernization” of the infrastructure at the Esrange launch site to meet the growing demand for testing and launching capability in the space sector. The goal is to begin launching small satellites into orbit in 2022 from Esrange.

Tests and launches … So far, Sweden and the spaceport have co-invested about $30 million into the site in the northern part of the country, which is ideally suited for polar launches. Two German companies, ISAR and Rocket Factory Augsburg, are building test facilities at the site, likely as a prelude to future orbital launches. And the European Space Agency’s reusability program, Themis, plans to conduct its first reusability test flights in 2022. (submitted by rodik)

Gone to California … After a final inspection, the first stage will be transported to Vandenberg Air Force Base in preparation for launch. The company has not provided an updated schedule for its initial launch attempt, but it still has plenty of work to do and will do well to complete this test flight before the end of 2020. (submitted by Ken the Bin)

Virgin Galactic nearing its next test flight. Space-tourism venture Virgin Galactic said Wednesday it remains on track to conduct its next test spaceflight in the coming weeks. “We expect our first spaceflight from Spaceport America to occur later this fall, and we are pleased to confirm that we are still on track to meet this timeframe,” the company said, according to CNBC.

A knight flying next year? … This will be the first of two spaceflights that the space-tourism company has planned to complete testing of its SpaceShipTwo spacecraft system, which should have just two test pilots on board. Virgin Galactic said last month that the second test spaceflight will then have four “mission specialists” inside the cabin. If both test flights succeed, Virgin Galactic expects to fly founder Sir Richard Branson in the first quarter of 2021, marking the beginning of the company’s commercial tourism service. (submitted by platykurtic and Ken the Bin)

Self-eating rocket lands some funding. The United Kingdom’s Defense and Security Accelerator has pledged nearly $120,000 to further development of a novel “autophage” rocket. The project, under development at the University of Glasgow, burns its own structure as propellant during its ascent to orbit.

Burn the fuel, burn the tanks … Autophage engines have already been test-fired by the Glasgow team using all-solid propellant, Parabolic Arc reports. The new funding will underwrite the research required to use a more energetic hybrid propellant, and this new engine will be test-fired at Kingston University in London’s new rocket laboratory in London next year. (submitted by platykurtic)

Issue related to GPS III launch attempt … NASA said the delay would provide additional time for “SpaceX to complete hardware testing and data reviews as the company evaluates off-nominal behavior of Falcon 9 first-stage engine gas generators observed during a recent non-NASA mission launch attempt.” The issue occurred on an October 2 Falcon 9 launch attempt scrubbed at T-2 seconds. A new date for the GPS III mission has not been set. (submitted by Ken the Bin and platykurtic)

Momentum building for propellant depots? This week, NASA made a significant investment in technology to store and transfer cryogenic propellant in space. Its $250 million in grants will go to four companies: United Launch Alliance, SpaceX, Lockheed Martin, and Eta Space. Ars explains why this is a consequential decision and could transform spaceflight, including launch.

Mine water, power rockets … At the same time, chief executive Tory Bruno of ULA has proposed the creation of a “Strategic Propellant Reserve,” a series of fuel depots between the Earth and the Moon. This would incentivize launch companies to think about reusing upper stages and support companies seeking to mine water from the Moon. ULA has pitched the idea to the National Space Council’s users advisory council. Bruno said the group agreed to study it further, SpaceNews reports. (submitted by JohnCarter17, Ken the Bin, and platykurtic)

China launches 30th rocket of the year. The Chinese Earth-observation Gaofen-13 satellite is on its way to a geostationary orbit after successful launch on a Long March 3B from Xichang on Sunday. This was the first launch from the busiest of China’s four launch sites since July 9, following renovations and upgrades involving launch towers, refueling, power supply, and communications to boost reliability, safety, and cadence, SpaceNews reports.

Ten more to go? … The renovations are aimed at improving annual launch capacity from around 17 to about 30 launches. Sunday’s launch was China’s 30th in 2020, including major launches of interplanetary spacecraft and space station-related launch vehicles. Four of the 30 ended in failure. Chinese officials said earlier they were aiming for 40 launches this year. (submitted by Ken the Bin)

Soyuz crew launch marks end of an era. A Soyuz spacecraft launched to the International Space Station Wednesday on what will likely be the last mission in which NASA pays Russia for a seat, SpaceNews reports. NASA’s Kate Rubins was added to the crew in May when NASA announced it was purchasing a final Soyuz seat from Roscosmos for $90.25 million.

Time to barter? … NASA officials had stated for months leading up to that May announcement that it was in talks with Russia not just for that seat, but potentially a second seat for a mission launching in spring 2021. Since the successful Demo-2 commercial crew mission to the ISS by SpaceX’s Crew Dragon spacecraft this summer, though, NASA has not expressed any public interest in buying future Soyuz seats. It is likely NASA and Roscosmos will trade seats on future missions, but nothing has been formally announced. (submitted by Ken the Bin and platykutic)

Upper stages pose highest risk for space debris. Although launch providers are doing a better job at disposing of upper stages left behind in orbit, rocket bodies still constitute the most dangerous pieces of orbital debris, according to a new report by the European Space Agency. The report identifies more than 25,000 tracked objects, including satellites, upper stages, and debris, SpaceNews reports.

Please dispose of unwanted rockets … In 2019, more than 70 percent of rocket bodies complied with orbital debris mitigation guidelines, compared to only about 20 percent in 2000. However, many upper stages from launches decades ago remain in low Earth orbit and continue to pose a problem. About 80 percent of objects on the list of most-concerning space debris were spent upper stages. (submitted by Ken the Bin and platykurtic)

Engines ready for first Ariane 6 launch. Europe’s new heavy-lift rocket—which will be powered by a single main Vulcain 2.1 core stage engine, a Vinci upper stage engine, and two or four solid rocket motors—is tracking toward a launch during the second half of 2021. Now, says ArianeGroup, all of its engines are ready for flight after a series of qualification tests.

A continental endeavor … The LOX-hydrogen Vulcain 2.1 and Vinci engines are ready to be mounted on the core stage in Les Mureaux, France, and on the upper stage in Bremen, Germany. Ariane 6 is a program managed and funded by the European Space Agency, for which ArianeGroup is design authority and industrial prime contractor.

Boeing pressing ahead with core-stage tests. During a call with reporters this week, Boeing’s Space Launch System program manager, John Shannon, said the core stage is nearing its final two tests. Boeing is planning a “wet dress rehearsal” test on October 30, followed by a hot-fire test on November 14 at NASA’s engine test facility in Southern Mississippi.

Rona and the tropics … At the beginning of the year, Shannon said during a media call that Boeing hoped to conduct the hot fire test in “July or August” of this year. However, the dual whammies of COVID-19, which forced a shutdown of the engine test facility, alongside closures for five hurricanes and tropical storms this summer have led to delays. If all goes well, the core stage will be shipped to Kennedy Space Center in January.

Russia considering building super-heavy rocket. Roscosmos has priced out the development costs for its “Yenisei-1” rocket, which would have the capacity to lift 70 metric tons into low Earth orbit. This is comparable to NASA’s Space Launch System rocket. According to Tass, citing Roscosmos head Dmitry Rogozin, the price would be “under a trillion rubles,” or $12.8 billion. The rocket must be ready to fly by 2028, according to a presidential decree.

To say we’re skeptical would be an understatement … Can we be real for a moment? The idea of Roscosmos spending *five* times its annual budget on a rocket with the same performance as Block I of the SLS, for an exploration program that does not exist, is absolutely insane. Fortunately for Russia, Rogozin is probably just throwing poo against the wall. Again.