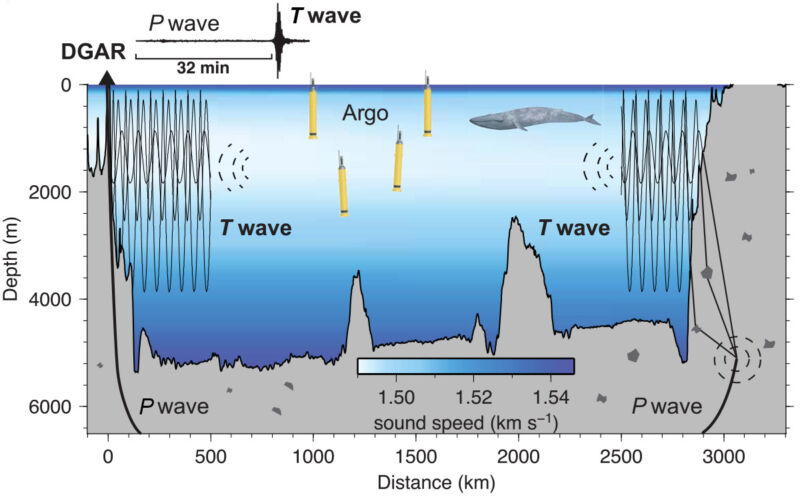 Enlarge / A seismometer on the atoll of Diego Garcia (left) can calculate ocean temperature with earthquakes near Sumatra (right).
Wu et al./Science

Geophysics has shown that precise measurements and a little modeling can perform wonders, like showing us the detailed structure of the Earth’s interior despite the fact that it is inaccessibly buried beneath hundreds of kilometers of rock. This is possible because seismic waves produced by earthquakes subtly change velocity or direction as they pass through different materials. A new paper shows that something similar can actually measure small temperature changes in the deep ocean.

An idea to use acoustic waves from man-made sources was actually floated several decades ago but died out after some trials. A team led by Wenbo Wu at the University of Toronto realized that earthquakes could be taken advantage of in the same way, removing the expensive logistics of constantly setting off booms to get measurements, as well as concerns about the effects on marine life.

There are actually several types of seismic waves released by earthquakes, and each behaves a bit differently. The P-wave (P for “primary” because it’s the first to arrive) is analogous to a sound wave, as it compresses the rock in the same direction it’s traveling. So where this wave reaches the seafloor or the ground surface, the rock can behave like a massive speaker, producing a very low-frequency sound wave in the air or water.

That same process can work in reverse, too. Say there’s an earthquake below the seafloor just off a coastline. The seafloor motion can create a sound wave that travels across an ocean basin and re-enters the seafloor rock of an opposing coast. This is actually detectable by seismometers as vibration that arrives extremely late—because the wave travels much slower through water than through rock. As it shows up after the primary and secondary seismic waves, this weird acoustic straggler is called a tertiary or T-wave.

T-wave travel speed is sensitive to water temperature, with warmer water slowing it down. (Complicating things slightly is that it’s also slightly sensitive to changes in salt concentration or current movement, but the researchers say the temperature effect dominates.) Seismometers are sensitive enough to detect very small differences in timing, so this is capable of measuring changes of much less than 1 °C.

But to calculate a change, you obviously need at least two measurements. That means you need an earthquake that is nearly identical to a previous one—what the researchers call a “repeater.” It’s not necessary for these earthquakes to be huge, however, so this isn’t as difficult as you might think.

To show that this works, the researchers used a seismometer station on Diego Garcia, a small atoll in the Indian Ocean about 3,000 kilometers from Sumatra. The tectonic plate boundary there is incredibly active, so there’s no shortage of earthquakes to work with. Between 2004 and 2016, there were over 4,000 earthquakes of magnitude 3.0 or higher that occurred near the Nias Island area of Sumatra. The researchers carefully processed all of these events to find repeaters similar enough to do the temperature calculation. They found over 2,000 such pairs based on 900 earthquakes.

Enlarge / Here’s an example of two nearly identical earthquakes, but the T-waves took slightly longer to arrive in the second one because the ocean was warmer.
Wu et al./Science

If this portion of the Indian Ocean were to warm 1 °C, T-waves from those earthquakes would take 5.4 seconds longer to reach this seismometer. The observed changes are smaller than that but they are coherent—there’s both an annual cycle and a gradual warming trend that look similar to other, more traditional, datasets.

The trend calculated by this “seismic ocean thermometry” is slightly larger, though. The researchers compare to estimates from the automated Argo array of floats and to NASA’s ECCO dataset, which combines data from different sources. Over the same time period, Argo shows a warming trend of 0.026 °C per decade in this area, while ECCO shows 0.039 °C per decade. The seismic estimate comes in at 0.044 °C per decade.

Enlarge / Here’s how the seismic temperature record (blue) lines up with two datasets based on measurements from things like floats and satellites.
Wu et al./Science

This isn’t about declaring one estimate to be the best; it’s about demonstrating that the technique is plausibly useful. Measuring temperature change in a completely independent way is valuable on its own. And instead of relying on a limited number of point measurements by a float, for example, it integrates the average temperature change through that entire volume of water. That’s unique.

It also measures a deeper portion of the ocean that is harder to access, and that depth may be somewhat tunable based on the specific frequency of T-wave you work with.

The researchers mention that underwater microphones (hydrophones) could be even more sensitive, taking advantage of smaller earthquakes. (There’s already an array of hydrophones out there in support of nuclear test ban treaties.) But perhaps the most interesting thing here is that existing seismometer data could be plumbed with this technique. So with a method nailed down, it’s possible to go hunting for historical measurements rather than just future ones. And getting data without deploying an array of new instruments is typically a lot cheaper than deploying an array of new instruments.

Physics, it turns out, can tell you a lot if your instruments are precise enough and you know how to use them.