Project Athia won’t arrive until 2022. Here’s when a bunch of other PS5 games are coming out.

The Consumer Electronics Show kicked off Monday. CES is usually held in Las Vegas, but this year it’s entirely virtual thanks to the ongoing global pandemic.

The reveal was contained in a slide a little over ten minutes into the presentation. Here are the games: 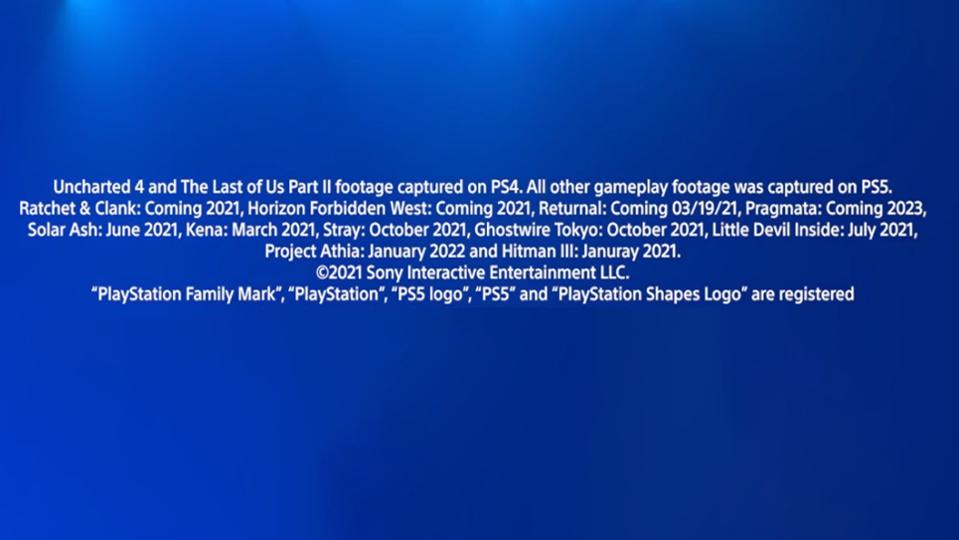 Of course, we already knew that Hitman 3 was coming out this month (I’m pretty stoked for this one) but the release window for Project Athia was unknown before now. The next-gen Square Enix project is mostly shrouded in mystery, but now we know it has a January 2022 release date, meaning it won’t come to Xbox Series X until 2024. Ouch. Thankfully, it’s only a timed console exclusive and will also release on PC, presumably in January of 2022.

Pragmata is the outlier in this list, with nothing but a 2023 release window. That’s a long time to wait for the Capcom title, which was originally given a 2022 release window.

Another big one? Ratchet & Clank: A Rift Apart which was originally given a release window that corresponded with the launch of the PS5. Sony told fans it would be a “launch window” game but in the CES presentation, it now simply shows 2021. Sometime—anytime—in 2021. Whether this means it’s launching later in the year or will still come out in the winter or spring remains to be seen.

Other games have more specific release dates and windows, with several releasing in 2021 including the fun looking Little Devil Inside and Guerrilla Games’ Horizon: Forbidden West.

Not a bad lineup overall, even if a handful of these won’t be around for a good long time.