Spider-Man Webs Vs. Star Trek Stun Guns: The Taser Brothers Are Fighting Over A $7 Billion Market To End Police Killings 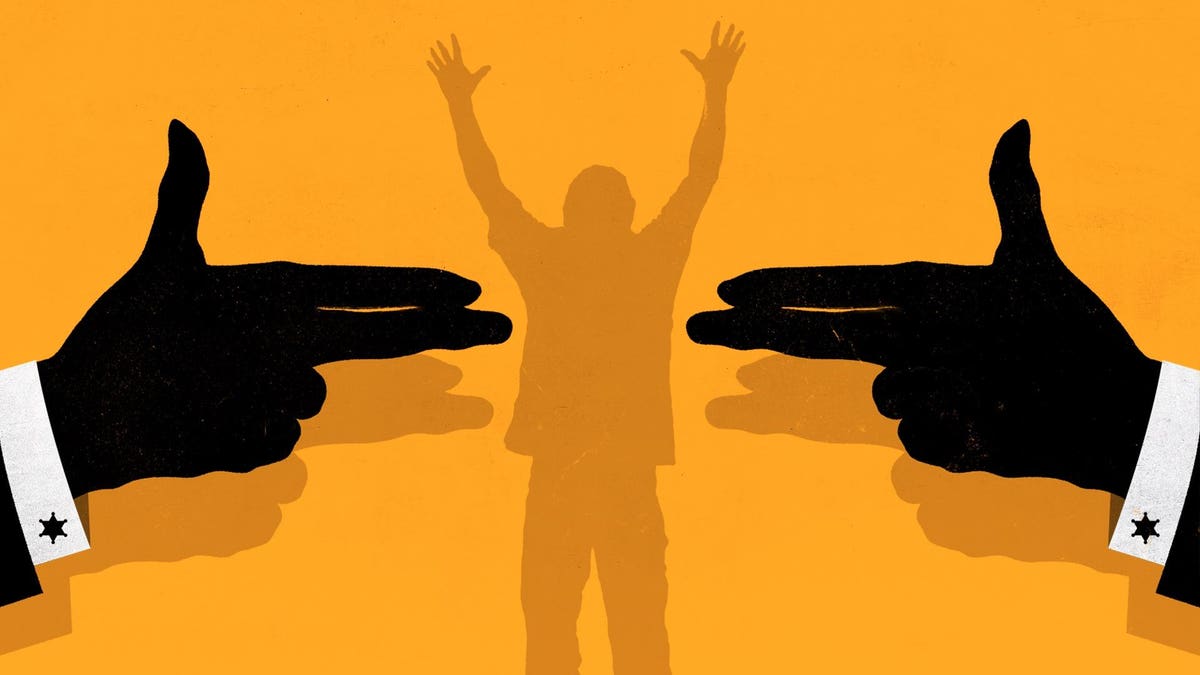 Rick and Tom Smith introduced the world to the Taser in the 1990s. Now the siblings compete in a $7 billion market for non-lethal weapons, at a time of intense scrutiny of police violence.

In December, police in Fruitland, Maryland, responded to a report of a man in distress. They’d had to deal with him before: His seizures caused him to become violent with his family. Rather than reaching for a Taser or using physical force, they turned to a device called Bola Wrap. When the officer fired, a Kevlar rope exploded from his hand like a web from Spider-Man’s wrist and wrapped itself around the target’s arms. The man’s mother asked, “So, it’s not like a Taser?” The officer responded, “It’s for stuff like this because they don’t mean to hurt anybody.”

The product is the creation of Wrap Technologies, whose chief executive officer is Tom Smith, one of two brothers behind the Taser non-lethal weapon. Though he left that business in 2013 after 20 years there, Tom, now 53, says he doesn’t see the Bola Wrap as a competitor to his former company’s better-known stun device, but rather as a complementary weapon to help immobilize an assailant in certain situations.

“It is pretty unique,’’ says Tom, who joined Wrap as president in 2019 and became CEO in March. “We’ve got two brothers who are CEOs at public companies and selling devices to this really contentious space, trying to solve these really difficult problems.”

The brothers are both operating in a market that seems poised to grow in light of ongoing scrutiny of police use of lethal force and outrage in Minnesota and elsewhere. According to a November 2020 report by Global Market Outlook, cited by Wrap, the global non-lethals industry — a category that includes hand-held weapons like the Taser and Bola Wrap but also a variety of other gear from batons to tear gas — logged $6.8 billion in sales in 2019 and is expected to expand to $8.1 billion by 2025. By comparison, the best estimates of the global lethal weapons industry, excluding military equipment, range from $6 billion to $8 billion.

Taser, which recorded $360 million in revenue in 2020, is still the dominant player in the pistol alternative niche, with smaller rivals like Phazzer, Digital Ally and Wattozz making few waves. “There’s nothing else on the market really,” says Kim O’Toole, who heads up Toronto Police Department’s police college. Its parent company Axon posted total sales of $650 million and less than $1 million in net profits last year but things are looking up:  net income for the fourth quarter hit $25 million and, according to 2021 estimates, revenue is expected to reach $780 million and net profit up to $140 million this year. As a result of that market dominance and Axon’s other successful businesses in police body cameras and evidence storage, Rick is rich and likely to get richer. Forbes estimates his wealth at more than $160 million and he could also be in line for an almost $1 billion windfall in the form of vested stock options if his company hits certain targets including a market cap of $13.5 billion, up from almost $10 billion now, and 12 of 16 revenue and profit milestones.

Tom and Wrap aren’t yet close to those kinds of numbers. Wrap reported revenue of just $4 million and a $12.5 million loss last year. Tom, who had more than 220,000 shares as of his last Taser filing in November 2011, sold them all when he left in 2013. (At the time, Taser shares were trading for $10; they are now priced at over $150 a share). He has stock options but no shares in Wrap, which is worth just under $200 million.

The brothers grew up under the influence of their father’s entrepreneurial ambitions. “We were pretty competitive brothers growing up. So that dynamic is in place,” says Rick. Though they’ve reconnected lately after losing their father in April just a few months after their mother died, their personalities have clashed over the years. Rick tends to be flashier, Tom more reserved. “We never really got along,” Tom told the New Yorker in 2018. “He goes to Vegas, I go to Montana. We’re polar opposites.”

When Rick was in college at Harvard University, two of his high school friends were shot dead. It was at that point, he says, that he started thinking about alternatives to the horrors of gun violence. After a stint studying in Belgium, where fellow students were disturbed by the proliferation of guns in the U.S. he began researching non-lethal tools that could replace lethal weapons. He wrote the original plan for a non-lethal weapons business during a class on entrepreneurship towards the end of his business school course at the University of Chicago. During his research, he singled out Jack Cover, an inventor, who created the original Taser technology, working with Rick out of a garage in Scottsdale. The name Taser is an acronym, coined by Cover after a book he loved, Tom Swift and his Electric Rifle, which included a fictional gun not dissimilar to the Taser.

Tom came on board, at first working nights and weekends, and helping to set up basic operations: bank accounts, payroll and offices. They looked to their father, who was CEO of a software company, for a helping hand, and the elder Smith provided a $100,000 angel investment, while coming on board as chairman. Tom later became president and director of the Taser company, albeit owning about half as much of the business as his brother and his dad by the time the company went public in 2001. As Rick ran the company at home, ramping up marketing and developing the Taser’s efficacy, and getting thousands of police agencies to sign up, Tom says he was building the business globally. “I took it to 120 countries around the world,” he says.

Tom says he left Taser hoping for a new lease on life. “I like the startup side of companies,” he says. A pilot like his father, Tom in 2012 cofounded and became CEO of Set Jet, a private jet charter flight platform. He later cofounded ATS Armor, a law enforcement armor supplier, but the company filed for bankruptcy in 2019.

When he was out on the road demonstrating and selling the Taser, Tom recalls, one request he kept hearing from police was the need for a non-lethal that didn’t inflict pain, as the Taser does. The first time he saw Bola Wrap in action in early 2019, he believed it was the answer. The Wrap inventor, Eldwood Norris, now the company’s CTO, was already known as the creator of the Long Range Acoustic Device, sometimes referred to as a sonic weapon, for its piercing noise designed to stop people in their tracks.

Taser’s solution is well-known: a stun gun that fires electrified barbs that latch onto suspects and produce muscle spasms intended to immobilize them. Once described as a non-lethal tool, the Taser is better labelled a “less lethal” option, perhaps because of hundreds of cases over the years when those who’ve been shot with a Taser have subsequently died, often by cardiac arrest, according to data collected by Reuters.

Tom sells the Bola Wrap as a relatively painless alternative to the Taser. It lassoes a target in Kevlar rope, acting as “remote handcuffs.” With no bullets or electricity, the chance of killing someone with Bola Wrap is billed as lower than using a gun or a Taser and just as effective. With Bola Wrap, Tom says, there’s no need to be precise as an officer only needs to fire close enough so that the 2.5 metre cord can ensnare a target. The biggest safety issue, he admits, are the hooks, similar to fishing hooks, that connect the ends of the cord together. “Our concern is more about those going into somebody’s eye. So we really try to train (users) to stay away from the face.”

Tom says 430 U.S. police agencies use the Wrap today, with sales in 38 countries. The Los Angeles Police Department is experimenting with the product, and other customers include the Portland and Buffalo police departments. It’s a minuscule share compared with Tasers, which Axon says are used by 90% of America’s 18,000 law enforcement agencies.

Some in law enforcement have doubts about Bola Wrap. A group from Toronto’s Police Department recently took a trip to Arizona to test out the tech. “In scenarios where people are running or walking or erratically moving, to be able to wrap both legs with a good wrap the first time is a bit difficult,” says superintendent Kim O’Toole. “I think they have some work to go.”

Tom’s ambitions for Wrap, meanwhile, are literally sky-high: He says Wrap is talking with drone companies about adding its non-lethal weapon to unmanned flight systems so the lasso can ensnare suspects from above. “Let’s say you have a barricaded suspect… and maybe get them wrapped before the officers have to go in there. It reduces the risk,” Tom says.

Back on land, Rick continues to refine the Taser’s design with hopes that it will be so effective that police won’t need to use guns. He also aspires to sell more Tasers to armed forces throughout the world. “I think it makes no sense for a major military to send their personnel abroad with only highly-lethal weapons. That is a recipe for bad things to happen,” he says.

There is plenty of skepticism that either of the brothers has the right answer to improve police and citizen safety. Kroll executive Daniel Linksey, former Superintendent-in-Chief of the Boston Police Department, thinks police need more training in basic techniques: learning to use words to deescalate a situation, and, when that fails, to use their hands. Many police officers, he says, have become reluctant to strike suspects for fear of going viral on YouTube. “I would argue that sometimes the old-fashioned ability to fight and roll around is probably the best thing for everyone involved,” Linskey says.