The world’s largest game company keeps churning out money, and high scores. But Beijing’s heavy hand threatens to weigh on the mood.

Tencent’s revenue for the quarter ended in September was up 29% from a year earlier, while operating profit rose 70%, both beating the forecasts of analysts on S&P Global Market Intelligence.

The boost the core gaming business got from the pandemic doesn’t seem to have faded: Revenue from smartphone games was up 61% year over year, the third consecutive quarter above 60%. The flagship game “Honor of Kings” is still going strong five years after launch, averaging 100 million daily users in the first 10 months of 2020. Tencent will make an animated series and a live-action drama series based on the game’s fictional universe. 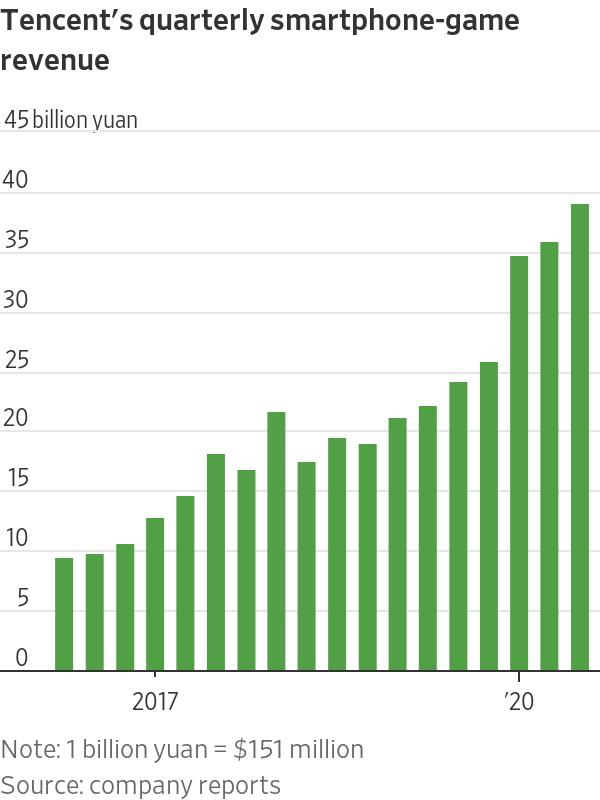 And Tencent can probably ride out the eventual likely waning of the Covid-19 boost, thanks to its strong pipeline. The new games “Moonlight Blade Mobile” and “League of Legends: Wild Rift” are both doing well.

But there is a cloud over the company’s outlook: Beijing’s latest regulatory actions. Last week the government halted the record $34 billion initial public offering of Alibaba-backed Ant Group, and this week it released a draft of tough rules targeting monopolistic practices on the country’s digital platforms.

Days before Chinese fintech giant Ant Group was scheduled to go public in what would have been the world’s largest listing, regulators put plans on hold. WSJ’s Quentin Webb explains the sudden turn of events and what the IPO suspension means for Ant’s future. Photo: Aly Song/Reuters

Tencent and Ant own China’s two dominant mobile-payment apps, so the sudden interruption of Ant’s IPO could drive down valuations of Tencent’s fintech business as well. Regulators may scrutinize Tencent less, as its online financial services business is smaller than Ant’s. But the segment is one of the company’s fastest-growing: The number of wealth-management customers last quarter was up more than 50% from a year earlier.

The sharing of user data across Tencent’s platforms may also come under regulators’ gaze, especially since it owns
WeChat,
whose 1.2 billion users make it the country’s most popular social network.

Tencent’s share price has fallen 8% since hitting its all-time high last week. Until the force of Beijing’s crackdown becomes clear, shares will struggle to reach the next level.

Write to Jacky Wong at jacky.wong@wsj.com

China's Risky Bet on a Lonely Return to Greatness

I Have Covid 'Nesting Fever.' But I Hate Fixing Up a Rental Apartment