Aficionados of
Tesla Inc.
were celebrating last week as the electric-car maker was accepted into the S&P 500, propelling its shares up 22% in two days.

Step back from the extraordinary gains, and the fact that America’s seventh-biggest company by market value is only now to be admitted to the index of the country’s 500 most-valuable stocks is weird. But it is only the most obvious of many strange but stock-price-moving ways that indexes rumble markets. Indexes play two important but often conflicting roles: They measure broad market performance, and they are investment tools.

Start with Tesla. It will join the S&P 500 next month after a decision by the committee that oversees the index. The same committee had rejected the company in September even after it finally met the index’s qualification condition of being profitable for 12 months.

Tesla’s stock has surged since the start of the year, giving it a market capitalization larger than many behemoths of American industry. But its rise wasn’t necessarily driven by fundamentals. WSJ explains. Illustration: Jacob Reynolds/WSJ

Index membership really matters, because there is about $11 trillion indexed or benchmarked to the S&P. Passive funds will have to buy tens of billions of dollars of Tesla stock—hence, the big move in price. So much money will need to move when the index is reconstituted next month that S&P is consulting on adding the car maker in two chunks.

Again, for both the passive investor and those using the index as a gauge of market performance, this is strange. Why do companies have to be profitable before they are allowed into the index? The whole point of investing passively is to leave it up to other people to decide if a company earns enough to justify its stock price. A gauge of performance should measure the profitable and the loss-makers alike. Plenty of companies are loss-making after they join the index, especially this year; it is odd that once in the club, the condition no longer applies.

David Blitzer, who retired as chairman of the S&P index committee last year, says the profitability rule was introduced around 2000 as dot-coms boomed, because a previous “going-concern” condition was seen as too vague.

Other than the profits rule, the fundamentals of a stock were almost completely ignored by the committee. Almost. “The only time valuations came up is if a stock had a big run up that no one could explain, because no one wanted to put a stock in [the index] and then have it drop 25% the next week,” Mr. Blitzer said. Tesla stock is up sixfold this year and trading at more than 100 times forecast 2021 earnings. 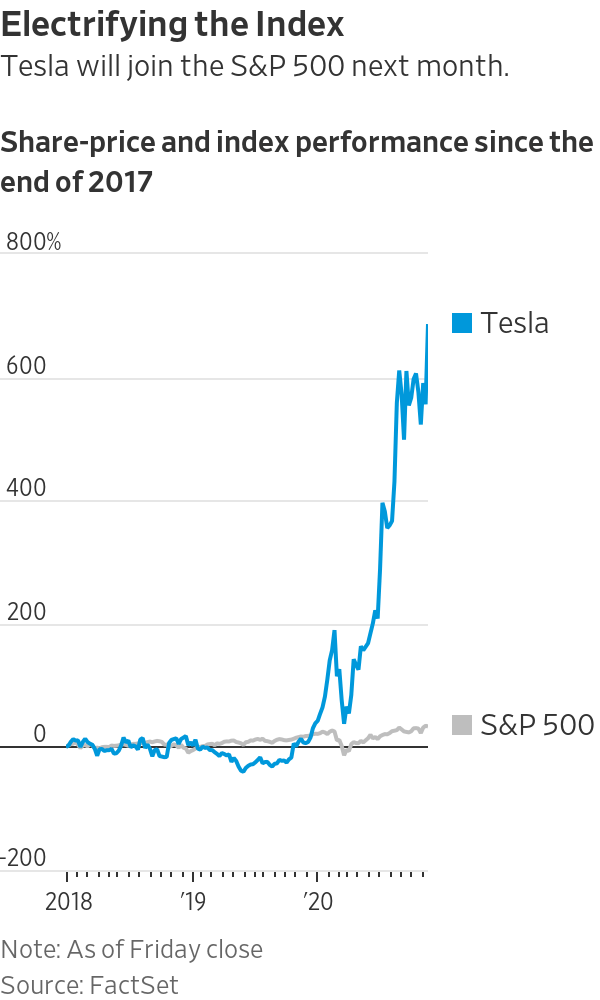 The profits rule is only the most glaring of many conflicts between an investor tool and a gauge of the market. Investors want anything that helps performance and eases trading, while a measure of the market should be comprehensive. The S&P 500 is by design not comprehensive, including only big stocks, but if it can exclude such a huge company as Tesla, what is it for?

The answer, according to S&P’s website, is that it “is widely regarded as the best single gauge of large-cap U.S. equities.” In the world of investment, that is pretty much all there is: If everyone uses the S&P as the benchmark, you have to pay attention. As Tesla’s move last week showed, the sheer weight of money means the S&P matters.

This has perverse effects, because other indexes, with different rules, are used elsewhere. The result is that the same stock can sit in several benchmarks, attracting money from those tracking, say the eurozone, as well as the U.S.—and contributing to the widely used futures tied to those indexes.

Consider
TechnipFMC
PLC. The British-registered oil-services company is the second-smallest member of the S&P by value, and so is at risk of being booted out next month to make way for Tesla. (It might also stay, as the committee isn’t forced to remove any particular company, any more than it was forced to add Tesla.) 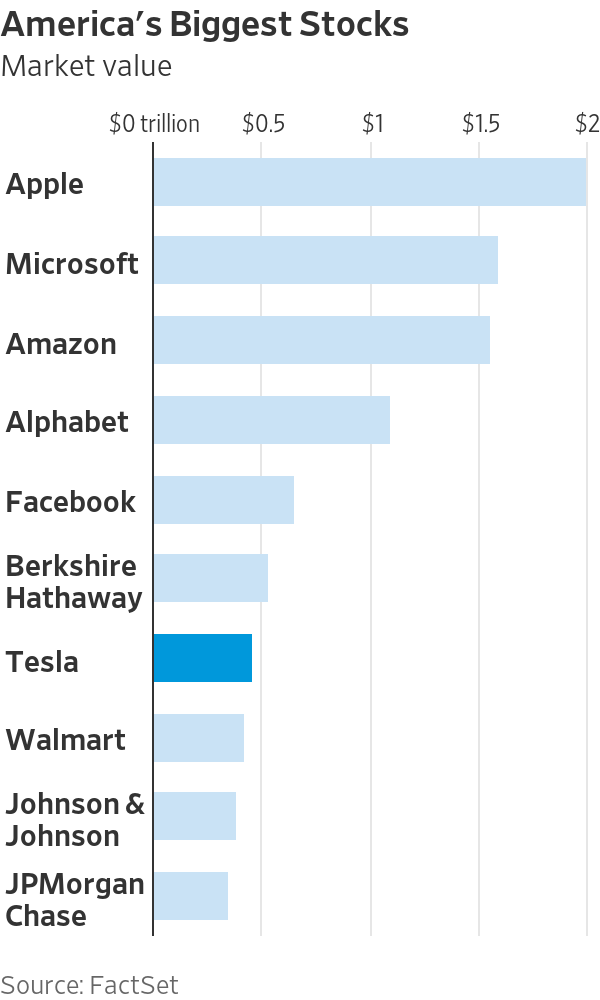 On Wednesday, TechnipFMC—formed from the merger of French and U.S. companies—was one of the best performers in the index. It was also one of the best performers in the Euro Stoxx index, where it is classified as a French company, and in Vanguard’s popular FTSE Europe ETF, where it is also treated as French. So a diversified portfolio using benchmarks from different index providers would probably have TechnipFMC twice—neither of them in the place where it is legally based.

When index investing got going in the 1970s, this wasn’t a problem because almost all companies were listed in the country where they were registered, based and did most of their business. Globalization has broken the links, with companies shifting for tax reasons, more cross-border mergers and many multinationals doing most of their business outside their home countries.

“Where a company is listed is pretty much irrelevant in today’s situation,” says Martyn Hole, an investment director at Capital Group, whose Capital International provided the “CI” in MSCI. (They are no longer linked.) He says aside from some corporate-governance rules and governmental pressure, stock pickers should focus on where companies make their money, not where they happen to be listed.

The index providers are in a bind, sometimes focusing on listing location, sometimes on legal status, and other times on where a company does its business—in part because of what investors want.

How have you handled investments in stock indexes this year? Do you plan to follow the same strategy in 2021? Join the conversation below.

MSCI includes foreign-listed companies in its home-country indexes where there are a lot of them, as with Israel, China and the Netherlands. There aren’t many German companies listed overseas, so German vaccine maker
BioNTech
SE, which IPO’d on Nasdaq, doesn’t qualify for MSCI’s German or European indexes. Because it is German, it doesn’t qualify for MSCI USA either. On the other hand, Tesla has been in MSCI’s U.S. indexes since 2010, because there is no rule on profits.

Most of these problems can be avoided by using very broad global indexes, such as MSCI All Country World or FTSE All-World, which have several large ETFs tracking them. There are still differences in which stocks qualify, notably nonvoting shares, but such an approach does at least avoid the biggest anomalies.

Investors still need to pay attention. There are vast amounts of money being shifted around based on strange and conflicting rules.

Write to James Mackintosh at James.Mackintosh@wsj.com