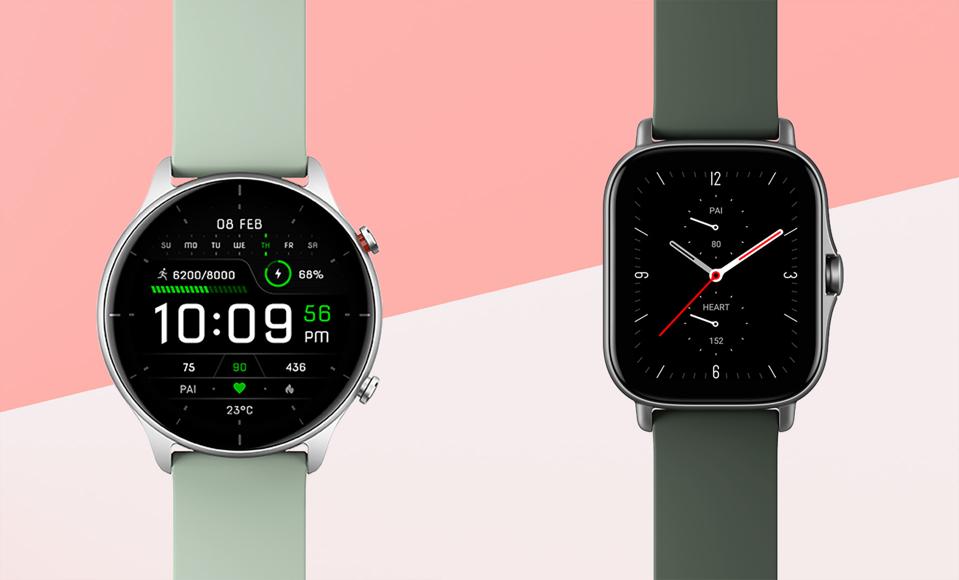 You can think of them as cheap alternatives to the Samsung Galaxy Watch 3 and Apple Watch SE. The Amazfit GTR 2e is the Samsung-a-like, with a round display. And the GTS 2e has a more Apple style rectangular screen.

Their battery life is perhaps the most attention-grabbing part. Human says the Amazfit GTR 2e lasts up to 45 days off a charge. And even if it is used with 24/7 heart rate scanning and to track three 30-minute tracked workouts a week, it should last around 24 days according to Huami.

The slightly smaller GTS 2e, the rectangular one, is rated for 24 days of “basic” use, or 12 days if you use it regularly.

These watches were announced for selected markets back in late 2020, but have now been confirmed for areas like the US and UK. The Amazfit GTS 2e and GTS 2e cost $139 in the US and £119 in the UK.

So, do you want the long battery life of the round design or the slightly trimmer appearance of the Apple Watch-a-like?

Neither offers the sort of downloadable apps you can get with a Samsung or Apple watch, but this is not necessarily an issue given their low cost.

The Amazfit GTS 2e and GTR 2e do, however, have basic voice command support. This lets you ask to launch features without needing an internet connection to decipher what you say.

These watches have a slightly cut-down set of features compared to the existing Amazfit GTS 2, but there are fewer cuts than I would have guessed. Both have aluminium top housings, for example.

You just miss out on a built-in speaker and storage for music. Both watches will be available shortly from Amazon in the US, if they aren’t already by the time you read this. UK buyers can pick up the GTS 2e from Argos, and the GTR 2e will go on sale at a later date.