The Coronavirus’ Uneven Effects On Energy Use In America

Panoramic image of the New York Midtown skyline as viewed from the Empire State Building at night … [+] (looking North).

A new study, authored by Diana Sabau at CommercialCafe, reviews the effects of lockdown measures on energy consumption during the second quarter of 2020 as states were trying to manage the first wave of Covid-19 outbreaks.

Using Energy Information Administration state-level and sector-specific data on energy sales, focusing on year-over-year changes comparing Q2 2019 to Q2 2020, the analysis showed a breakdown of the main sources of energy generation in America, their share within the national energy market, and any changes resulting from the pandemic during this time period.

Nationally, power consumption dropped 4% compared to the same time period last year. Power requirements for workdays basically dropped to Sunday levels under the lockdown, which was marked by significant reductions in the services and industrial sectors.

The study also looked at each state (see maps below, click on the title above each figure to access the interactive version of the map). 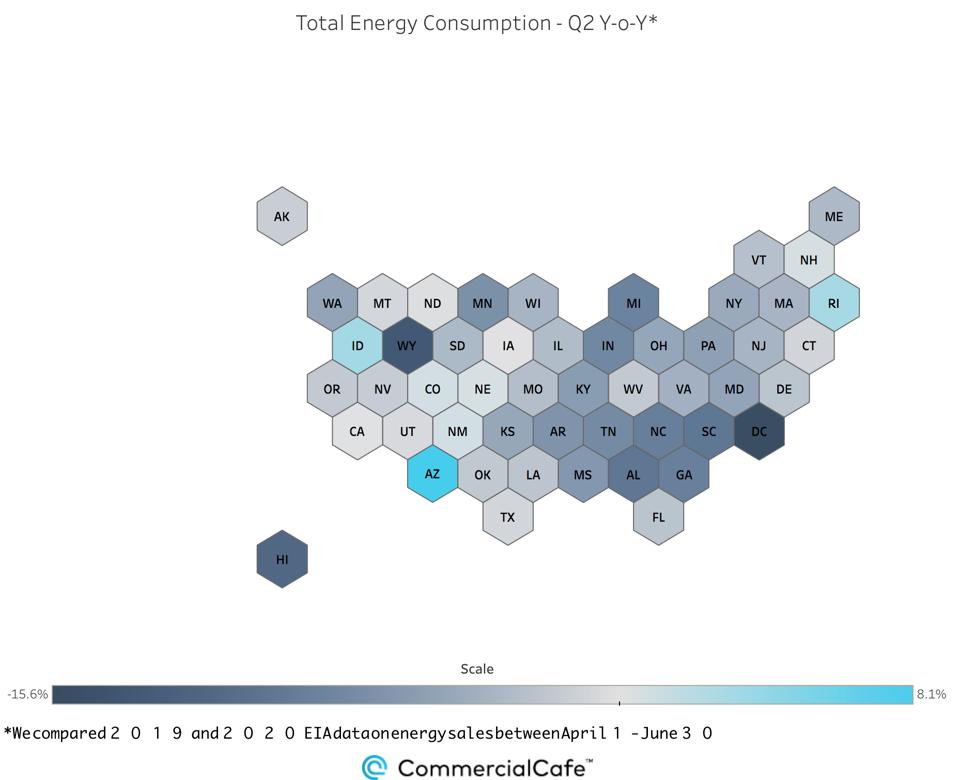 Meanwhile American household energy sales increased 8% on average in Q2, including a record 21% increase in Arizona and Michigan.

In terms of energy sources, natural gas is the most prominent energy source in the country. In the first half of 2020, it contributed to 40% of the energy requirements in the U.S. market. Importantly, between April and June of 2020, energy from renewable sources, including hydro, made up 23% of the total energy sales, exceeding coal by 7%. 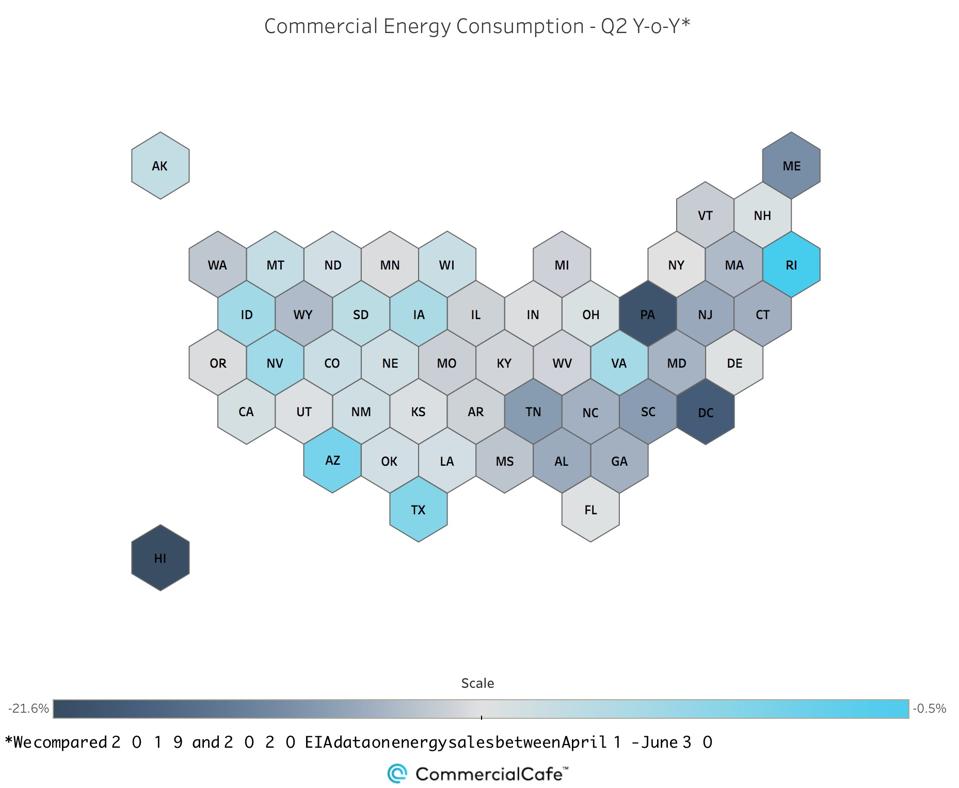 Hawaii registered the most significant decrease in energy consumption in its commercial sector between April and June. The closing of many hotels, restaurants and other hospitality-related businesses, along with school closures, brought the sector’s power usage down by 22%. Pennsylvania and Washington, D.C. commercial energy consumption fell by 21% and 20%, respectively. 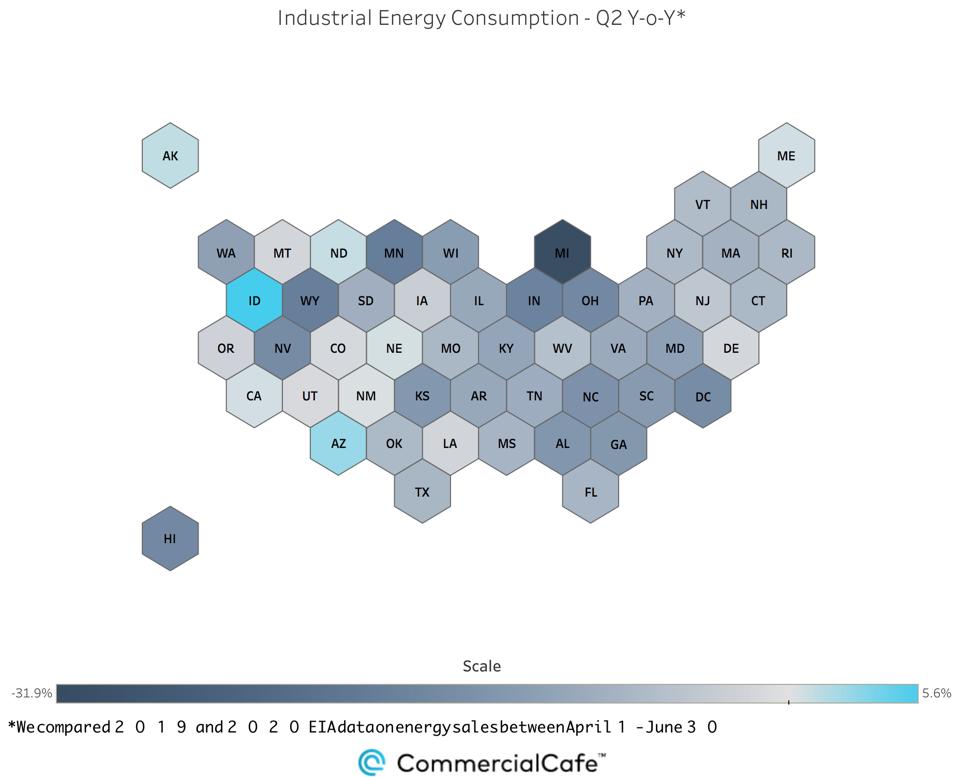 The most extreme effect occurred in Michigan which had the sharpest decline in energy requirements across its industrial sector with a 32% drop in kWh usage. As auto-manufacturing slowed or crawled to a halt in Michigan, it had a ripple effect on manufacturing across the U.S. because many other manufacturers rely on components made exclusively in Michigan. 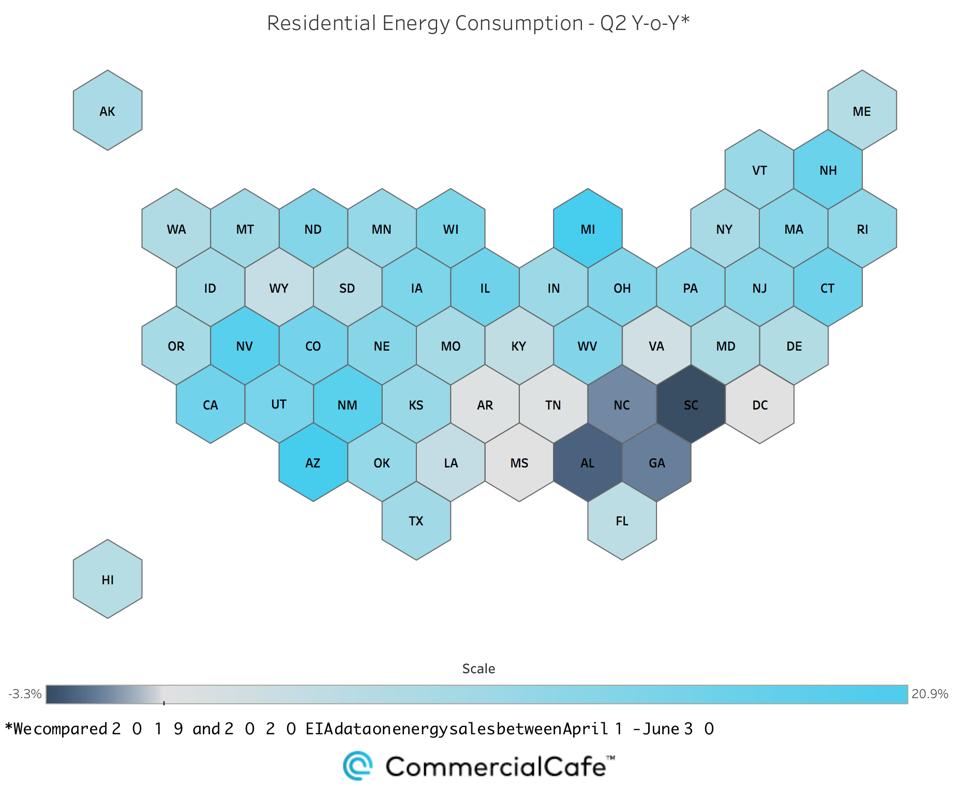 Only six states – Alaska, Arizona, California, Idaho, Maine and North Dakota – registered an increase in industrial power consumption during the second quarter, with Idaho increasing the most at 5.6% year-over-year.

With so much unused or underused space on the market, owners and investors are seeing renewed potential in adaptive reuses of these buildings. For instance, thousands of square feet of office space in Boston, San Diego, Houston and New York are currently being converted into lab space as demand for this type of space has been growing since the onset of the pandemic.

So as the pandemic progresses, energy use will continue to evolve, perhaps in ways that will become clearer with time.

Is Affordable Housing Development In Your DNA?

8 Teams That Were Big Winners At The 2020 NBA Draft