The Duty-Free Business Must Reroute to China

Beijing is using the Covid-19 crisis to encourage China’s globe-trotting consumers to spend more back at home. Europe’s stricken duty-free operators have to follow them.

Airport shops are still all but empty. Paris-listed Lagardère said last week that sales in its travel retail division fell 66% over the three months through September, compared with the same period of 2019. Larger Swiss rival
Dufry
reported an even sharper 80% drop for its third quarter. Both businesses have scrambled to save cash this year by cutting dividends, laying off workers and renegotiating the fees they hand over to airport landlords.

Global passenger numbers won’t bounce back to normal until 2024, according to the International Air Travel Association. Even then, policies introduced by the Chinese government over the summer mean a chunk of global duty-free spending may have permanently rerouted back to China. 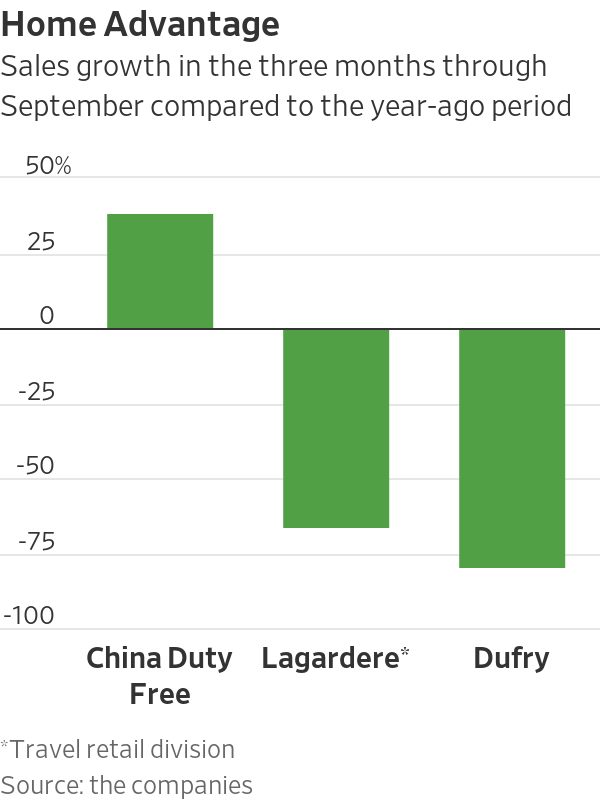 Beijing has tripled passengers’ duty-free allowance. And to encourage shoppers to spend at home, the quota can be spent up to six months after a trip, either at the airport or in a string of downtown duty-free shops that have opened this year in cities such as Dalian and Qingdao.

Analysts at Bernstein expect China’s domestic duty-free sales to be worth 153 billion yuan by 2025, roughly $23 billion at today’s exchange rates. That is triple the current level. A chunk of the gains will come from the pockets of foreign travel-retail companies that used to profit from heavy spending by Chinese travelers overseas.

Already, domestic operator China Tourism Group Duty Free has become the sector’s biggest player globally, up from its fourth-largest previously, according to Marco Ghiotto, senior partner at specialist consulting firm TW.O & Partners. “There has been a radical change in travel retail in China,” he said.

Business is booming as local travel in China returns to normal. China Tourism Group Duty Free’s share price has more than doubled this year, compared with a 54% drop at Dufry. Lagardère is down only slightly, but this is because of takeover speculation following stake-building by two French billionaires rather than optimism about its travel-retail division. Vincent Bolloré has used media conglomerate
Vivendi,
which he controls through a family holding company, to accumulate roughly 27% of Lagardère, while Bernard Arnault, who created luxury group
LVMH Moët Hennessy Louis Vuitton,
has taken a stake in the Lagardère family investment vehicle.

Both Lagardère and Dufry need to figure out how to get a bigger cut of the diverted Chinese spending. Lagardère might be in a stronger position as it already has a large Asian business. Sales in mainland China increased by 36% in the latest quarter, though from a small base. The company won the tender to run a major duty-free mall in Sanya, on the island province of Hainan, which is rapidly becoming a favorite shopping destination for Chinese travelers.

Even after passengers feel safe to travel long haul again, the old spending habits may never come back. The faster Europe’s duty-free operators can expand in mainland China, the better their chances of a full recovery.