The Great Orion Nebula Is Even Greater Than You Know 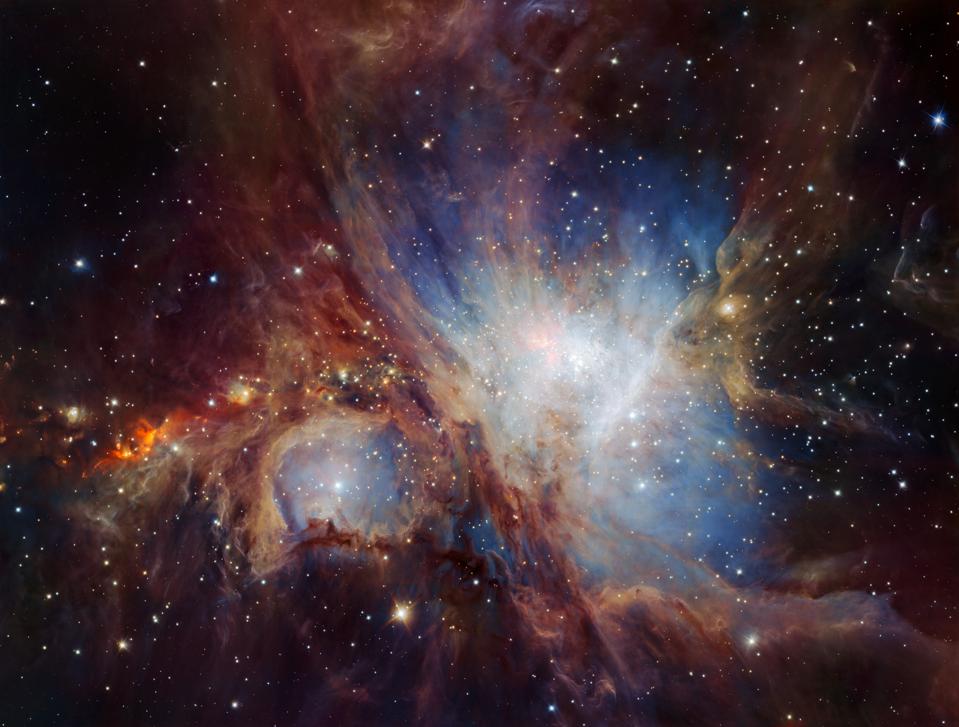 This spectacular image of the Orion Nebula, complete with its incredibly rich star-formation region, … [+] was obtained from multiple exposures using the HAWK-I infrared camera on ESO’s Very Large Telescope in Chile. New stars are still forming in this nebula, but they’re almost done doing so, as the hot, young stars are actively boiling the potential star-forming gas away.

Shining brilliantly in January’s skies is the Great Orion Nebula. 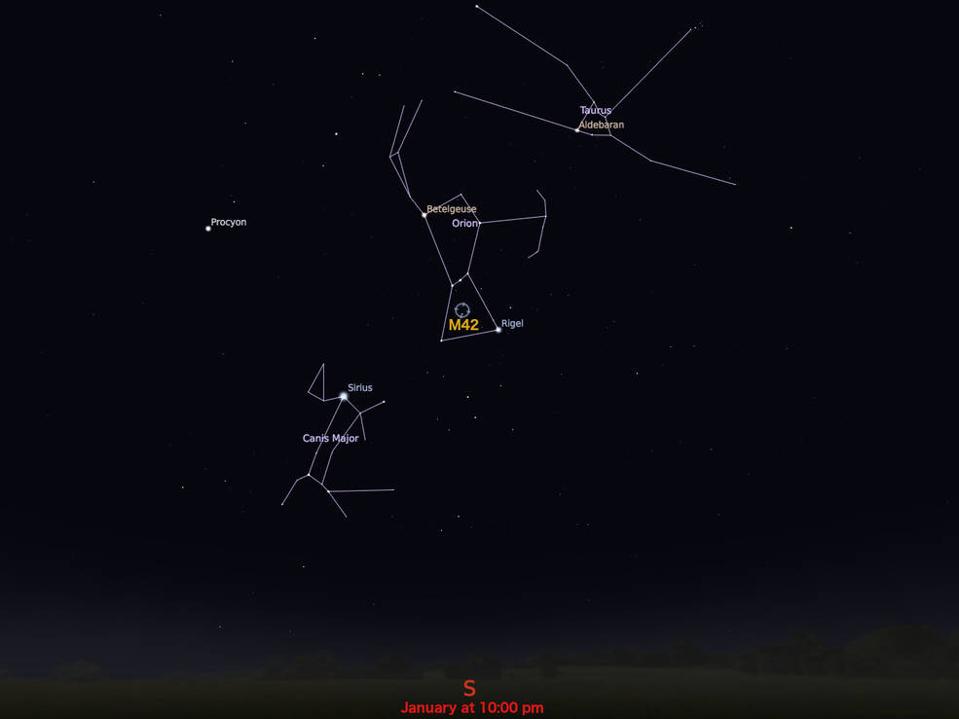 By 10 PM every night in January from the Northern Hemisphere, Orion will be high and brilliant in … [+] the sky. While the belt points towards the Hyades and Pleides in one direction and back down towards Sirius in the other, the great Orion Nebula itself, Messier 42 (M42), can be found just beneath the belt, and is sometimes called Orion’s Sword.

Located just over 1,000 light-years away, it’s the closest major star-forming region to Earth. 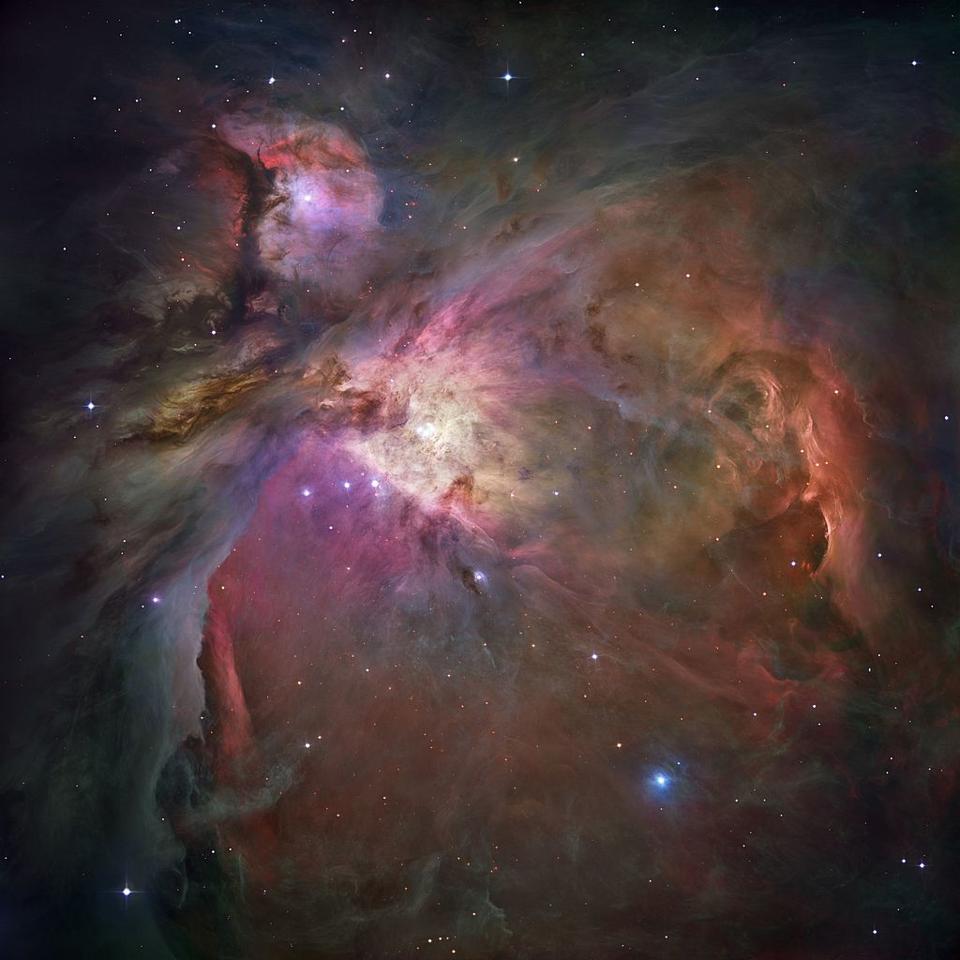 The great Orion Nebula is a fantastic example of an emission nebula, as evidenced by its red hues … [+] and its characteristic emission at 656.3 nanometers. New stars heat and ionize the surrounding gas, and when the electrons fall back onto their ionized nuclei, they produce a cascade of emissions, including this characteristic red color.

It includes the Northern Hemisphere’s most prominent, reliable winter sights.

This wide-field view of the constellation of Orion shows the belt (middle), the bright orange … [+] Betelgeuse (top left) and bright blue Rigel (bottom right), and the Orion Nebula in the middle of two barely-discernable stars in the proverbial ‘sword’ beneath the belt. Through even an amateur telescope or a digital camera, it’s a spectacularly reliable sight.

The main nebula, Messier 42, is visible to the naked eye. 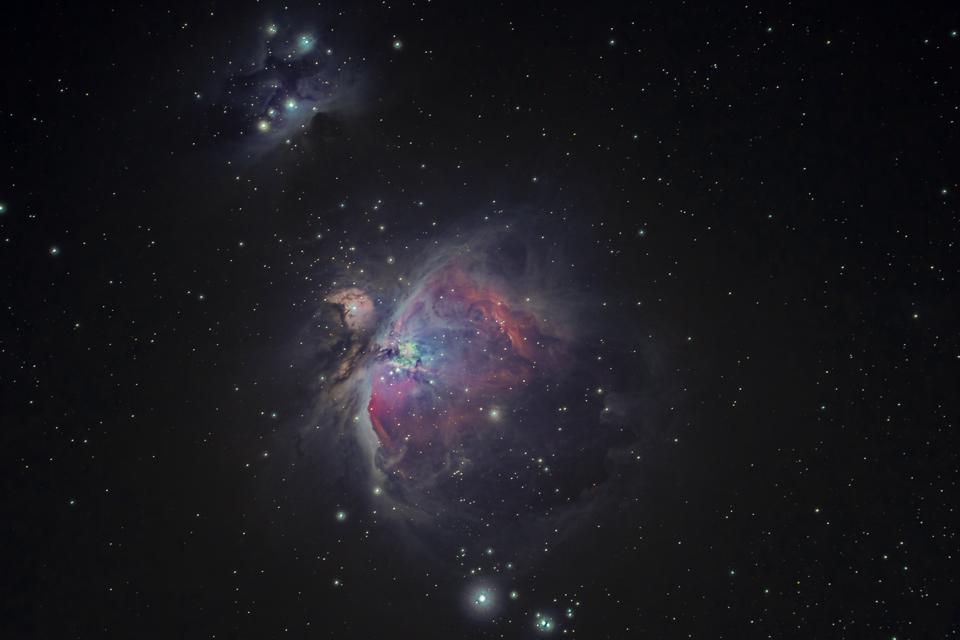 A more magnified, deeper view of the Orion Nebula showcases a number of bright stars individually … [+] inside, as well as a blue reflection nebula in the center of the red emission features. A thick dust lane, at left, cuts off a portion of the nebula, while the bluer reflection nebula, above (known as the Running Man nebula) is clearly distinct.

Through a telescope, its features are spectacular. 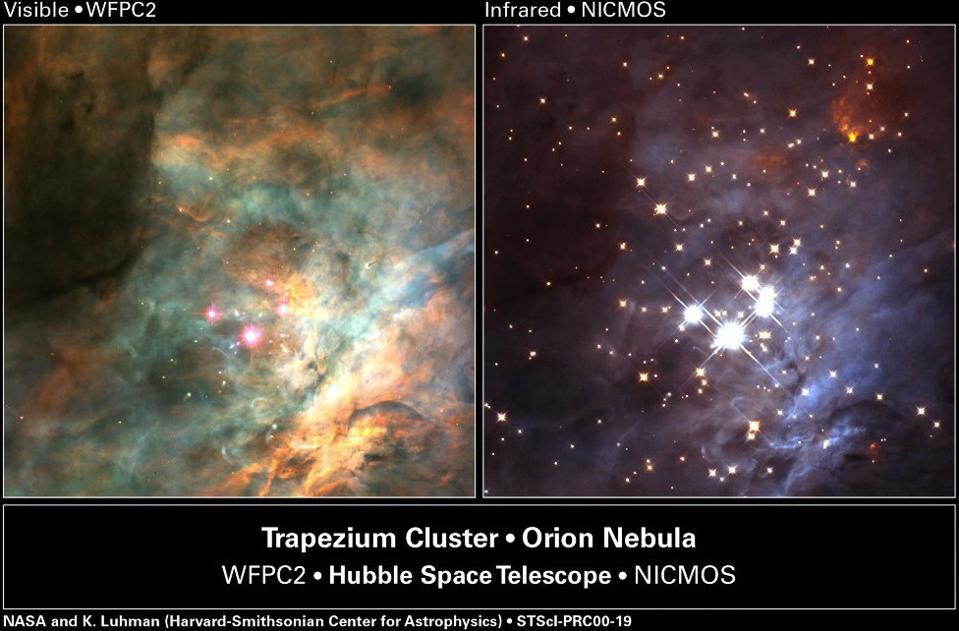 Star-forming regions, like the one housing the Trapezium Cluster inside the Orion Nebula, in visible … [+] light (L) and infrared light (R), are typical of where star systems, including single stars like ours and binary, trinary, and even greater multi-star systems get created. In visible light, the dust dominates the field of view, while in infrared, the dust is almost invisible, revealing the stars inside.

The bright Trapezium star cluster lights up the nebula’s center. 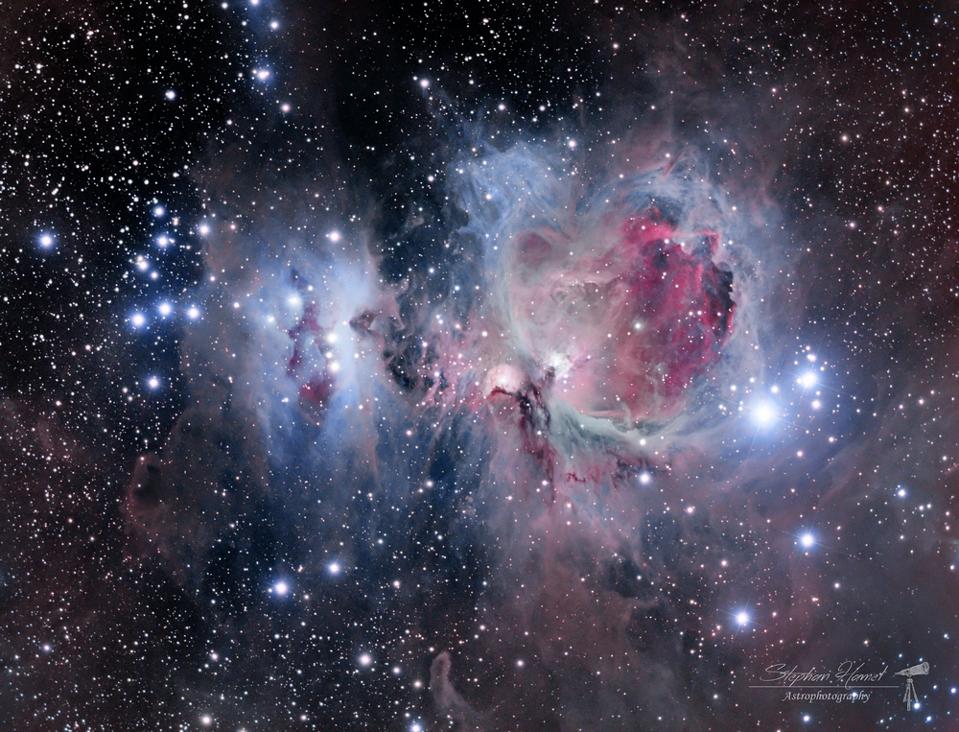 There are many brilliant blue stars present in the Orion Nebula, far outnumbered by the white, … [+] yellow, orange and red stars that are far less luminous and prominent. Yet just 12 million years ago, there were only dust, gas, and the background stars to see; all of the stars that have formed in Orion have done so over the last 12 million years.

The oldest of these stars formed just 12 million years ago. 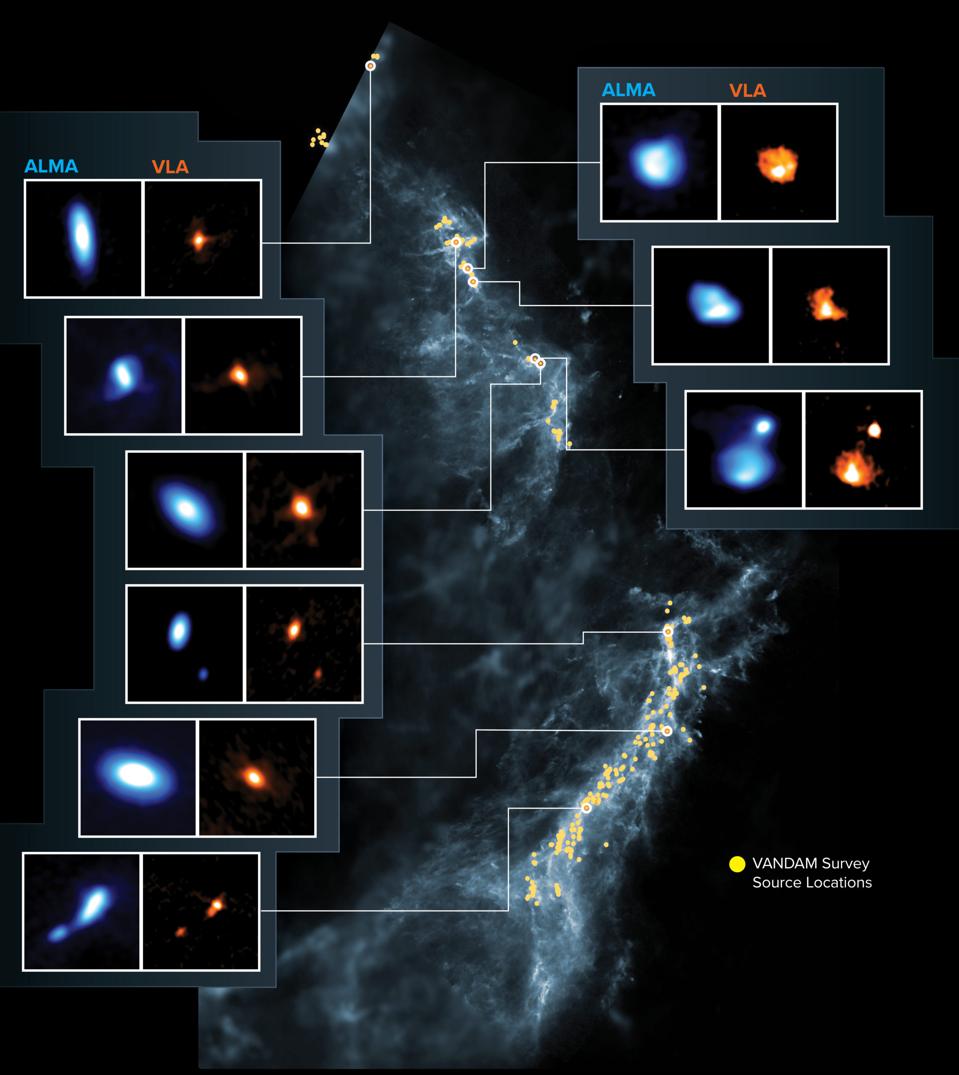 This image shows the Orion Molecular Clouds, the target of the VANDAM survey. Yellow dots are the … [+] locations of the observed protostars on a blue background image made by Herschel. Side panels show nine young protostars imaged by ALMA (blue) and the VLA (orange). 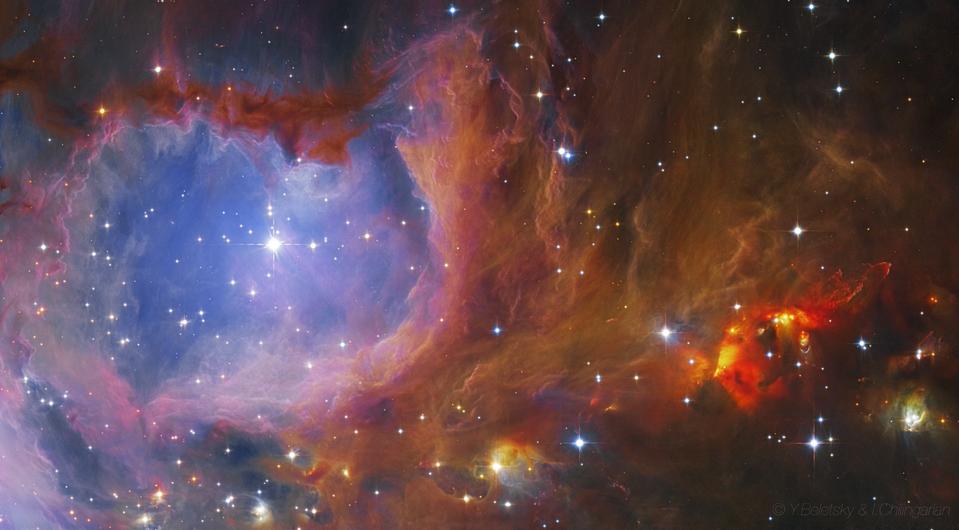 Although its neighbor, Messier 42, gets all the attention, Messier 43 lies just across a dust lane … [+] and continues the great nebula, illuminated largely by a single star that shines hundreds of thousands of times brighter than our own Sun. Located between 1000 and 1500 light-years away, this is part of the same molecular cloud complex as the main Orion Nebula.

Next door is Messier 43, separated from the main nebula by a single large dust lane. 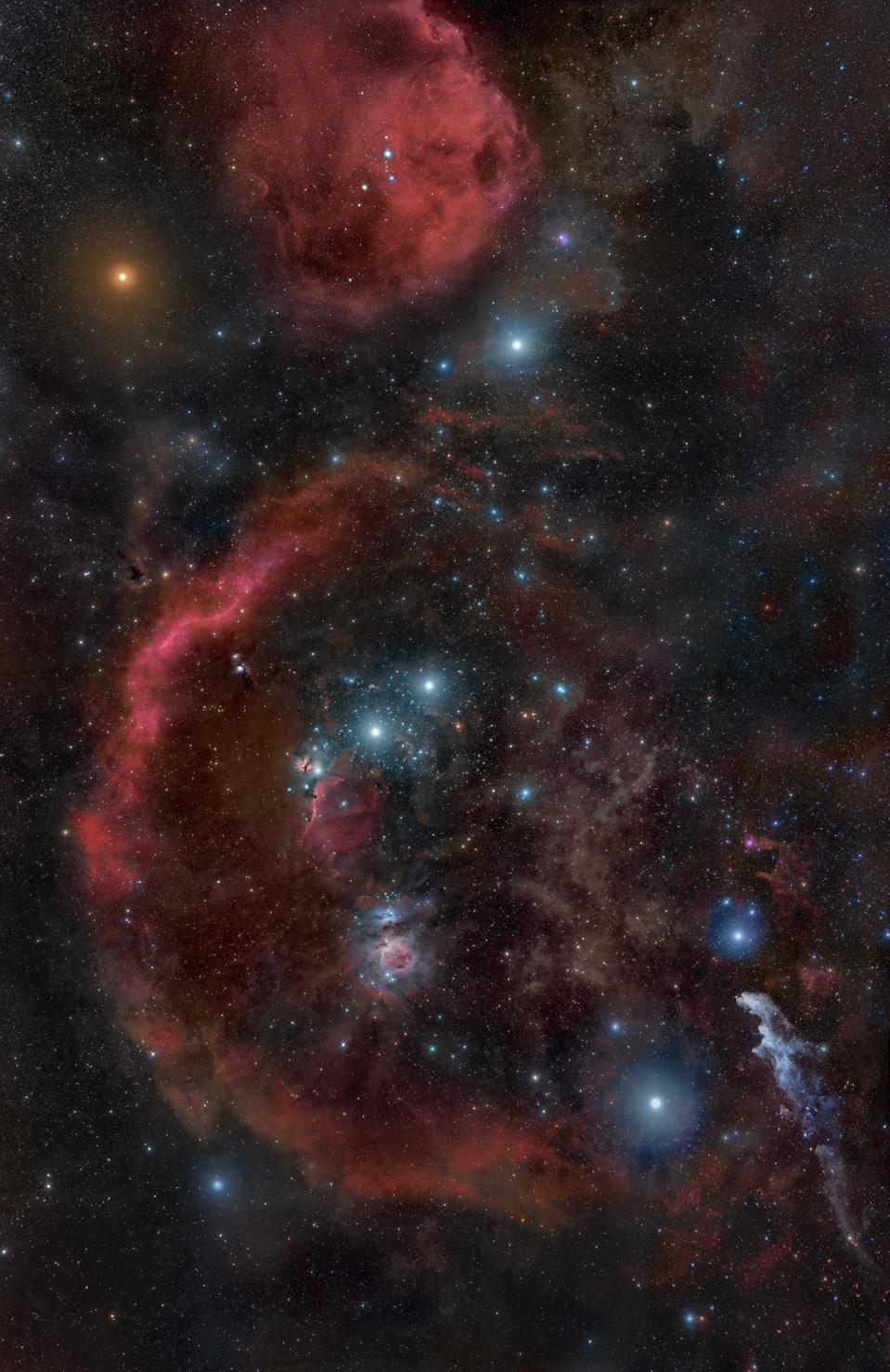 All this is included within the greater Orion Molecular Cloud Complex. 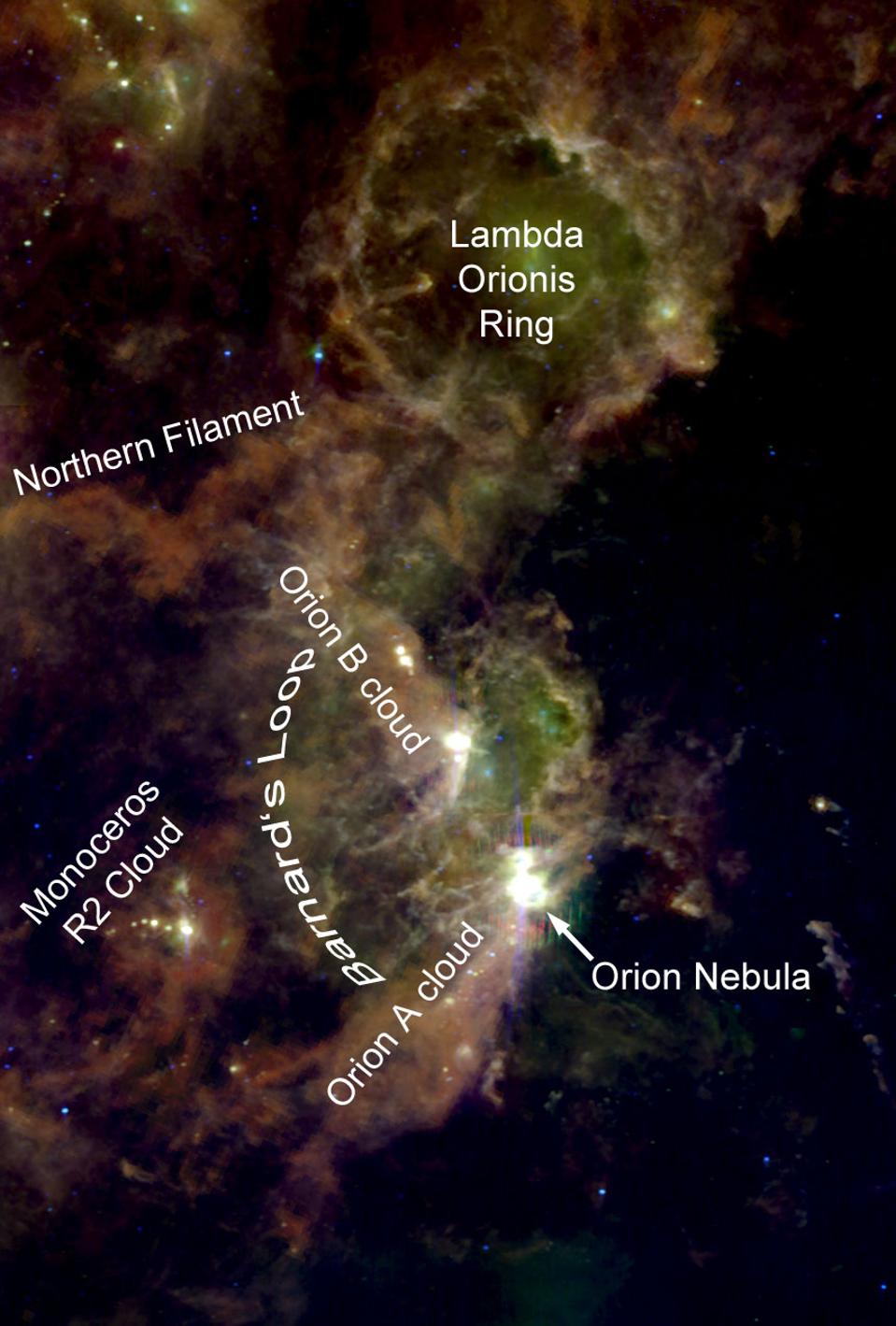 This enormous molecular cloud complex has many different components (labeled), which was constructed … [+] with mid-and-far-infrared data as well as the signature of the carbon monoxide (CO) molecule, abundantly found here in this nebula. The dust and gas is clearly traced out, showing the locations of current and future star formation. 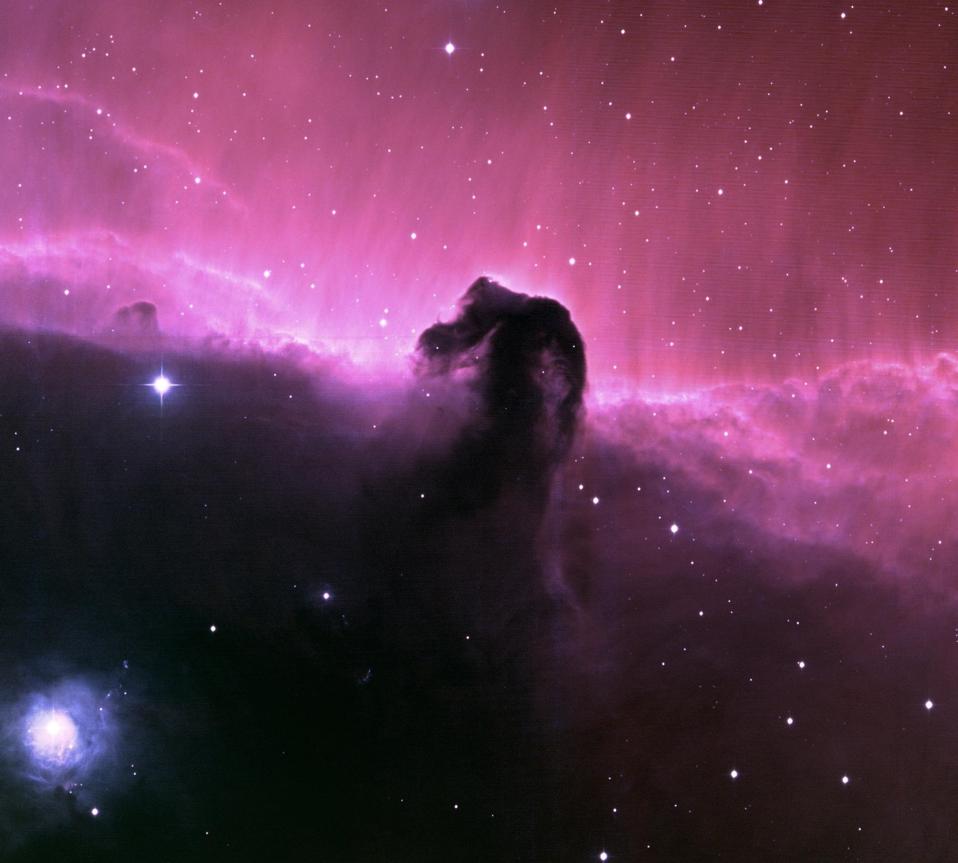 In visible light, the Horsehead nebula appears as a dark silhouette against a hydrogen-rich, light … [+] emitting background. It has also been viewed in the infrared, where it can be seen emitting its own heat signature, owing to being heated up from the outside by radiation and inside from potential new proto-stars. 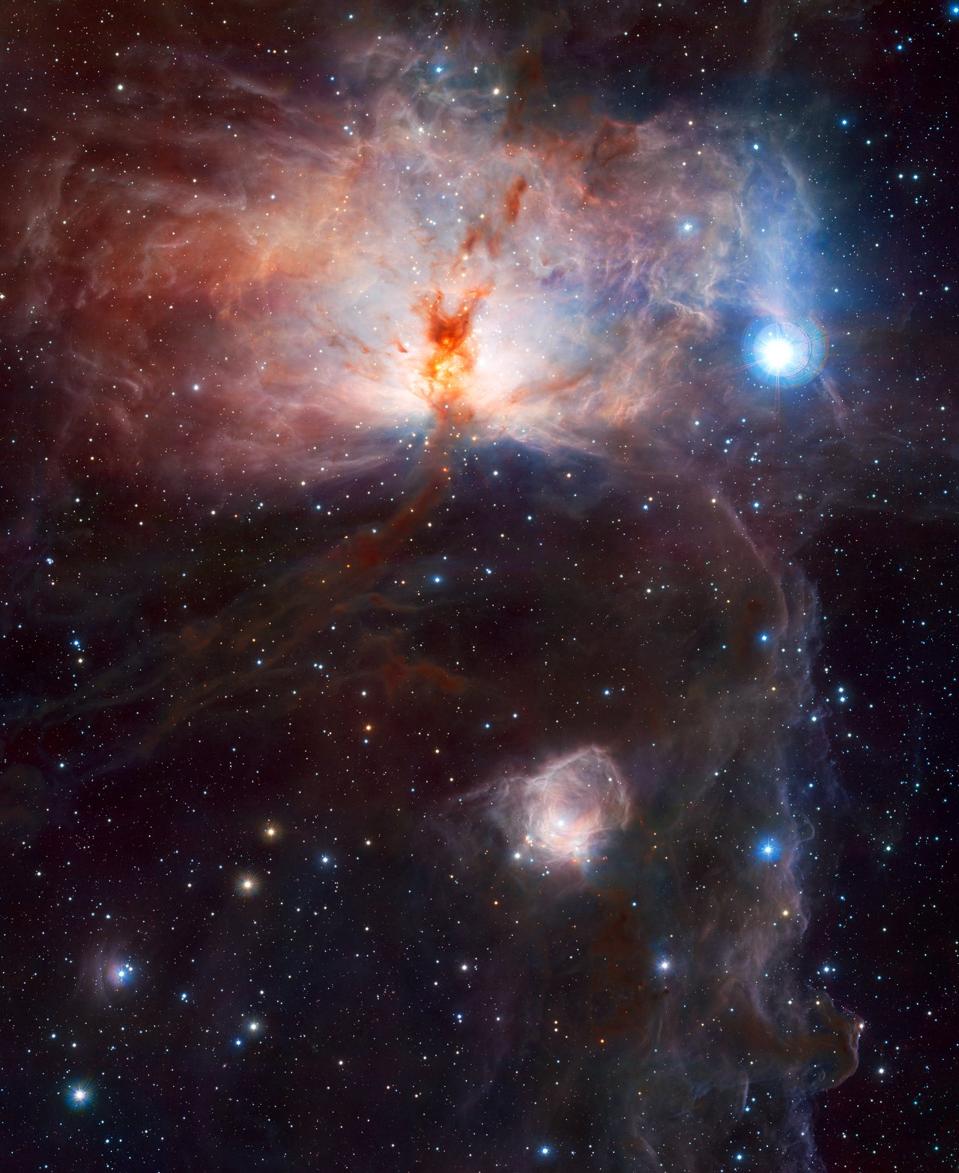 The Flame Nebula, illuminated by a nearby blue star (the left-most star of Orion’s belt), is lit up … [+] by reflected starlight, rather than from emitting its own light. This cloud of gas is part of the great Orion Molecular Cloud Complex, and represents a region where new stars haven’t formed yet, but may form over the next few million years.

Nearby, the Flame Nebula is illuminated by a nearby blue star. 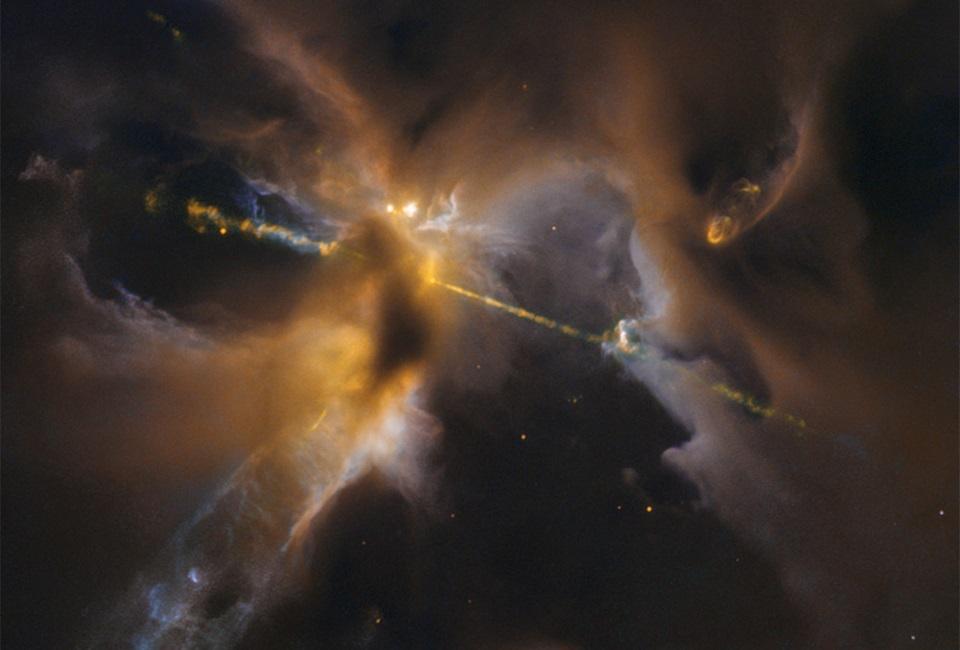 Ultra-hot, young stars can sometimes form jets, like this Herbig-Haro object in the Orion Nebula, … [+] just ~1,500 light years away from our position in the galaxy. The radiation and winds from young, massive stars can impart enormous kicks to the surrounding matter, where we find organic molecules and the raw ingredients for life, as well. 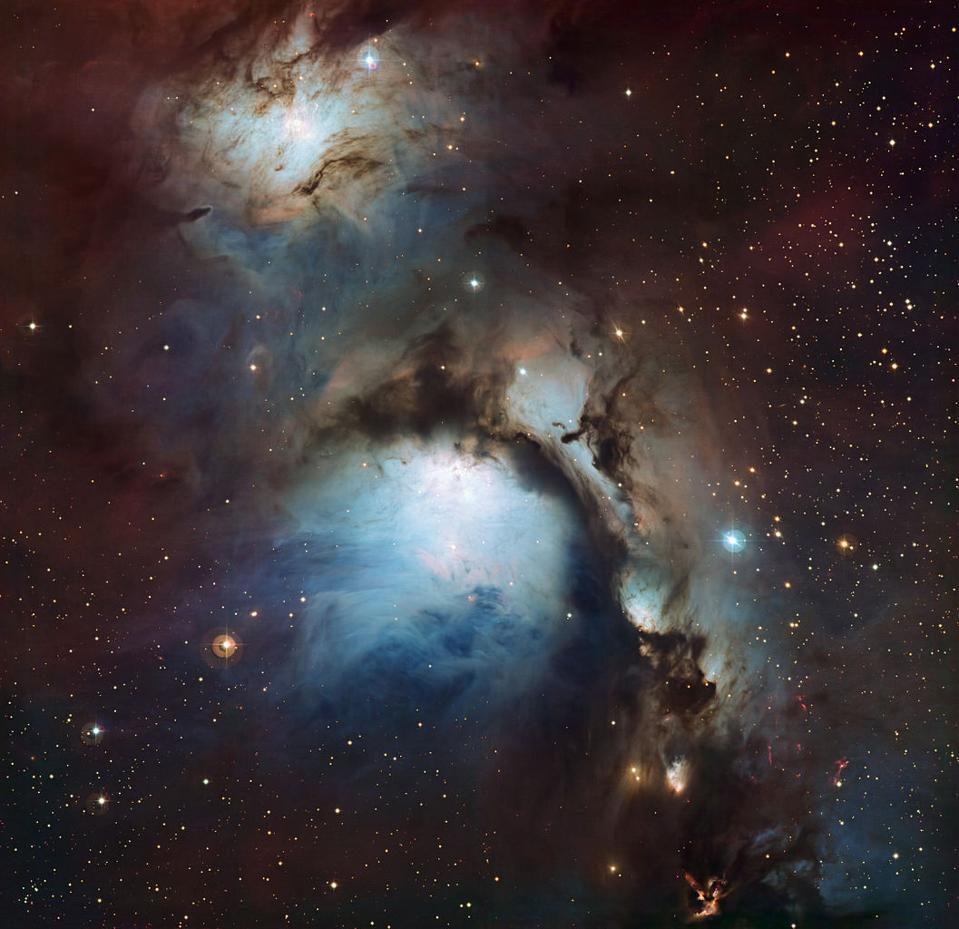 Although Messier 78 is located quite far away from the Orion Nebula and the other Messier objects … [+] (M42 and M43) typically associated with Orion, this reflection nebula is part of the same great molecular cloud complex, and is lined with dust and brilliant blue stars. In time, this may transform into a hotbed of star formation, becoming an emission nebula instead. 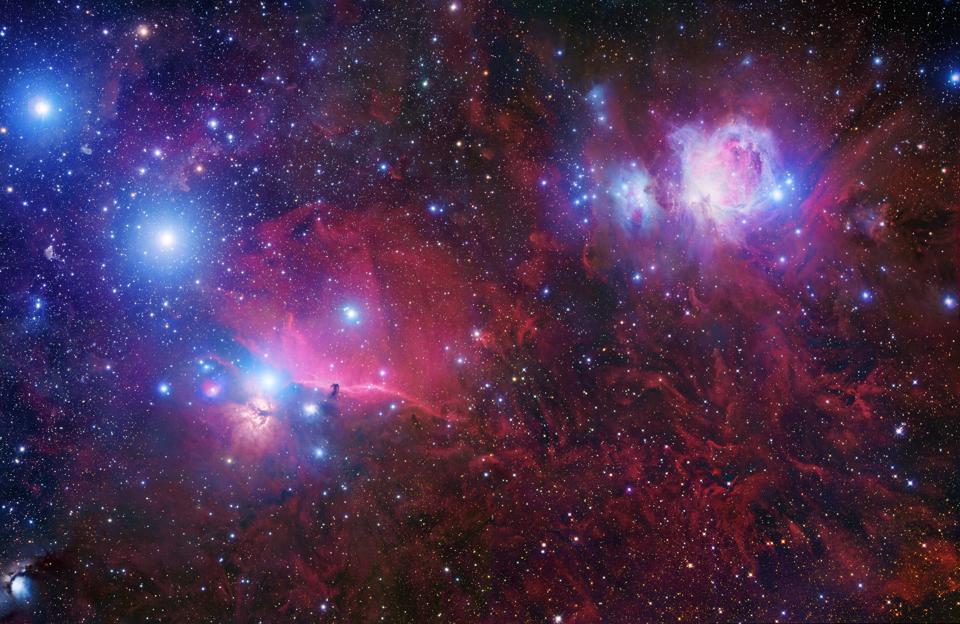 This brilliant composition by astrophotographer Rob Gendler shows a portion of the Orion Complex, … [+] including the Orion Nebula (upper right), the three belt stars (left), the Flame and Horsehead Nebulae (mid-lower left), and the emission features (in red) of the hydrogen gas, transitioning back to neutral from an ionized state.

Spanning over 100 square degrees, the Orion Complex is the largest single structure visible from Earth. 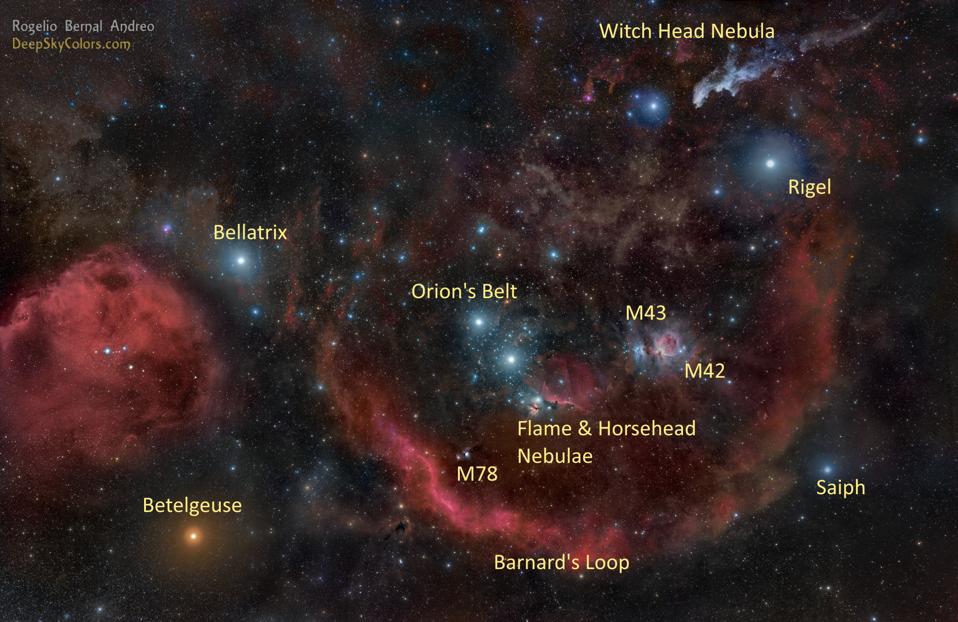 The enormous amount of red shown here indicates the emission features of ionized hydrogen, and yet … [+] still represents only a portion of the great Orion Molecular Cloud Complex. Subtending as much as ~20 degrees on the sky per side, it is arguably the largest single feature visible in Earth’s night sky other than the plane of the Milky Way galaxy.