With Wall Street still fawning over Snap’s monster results last week,
Pinterest
did them one better. 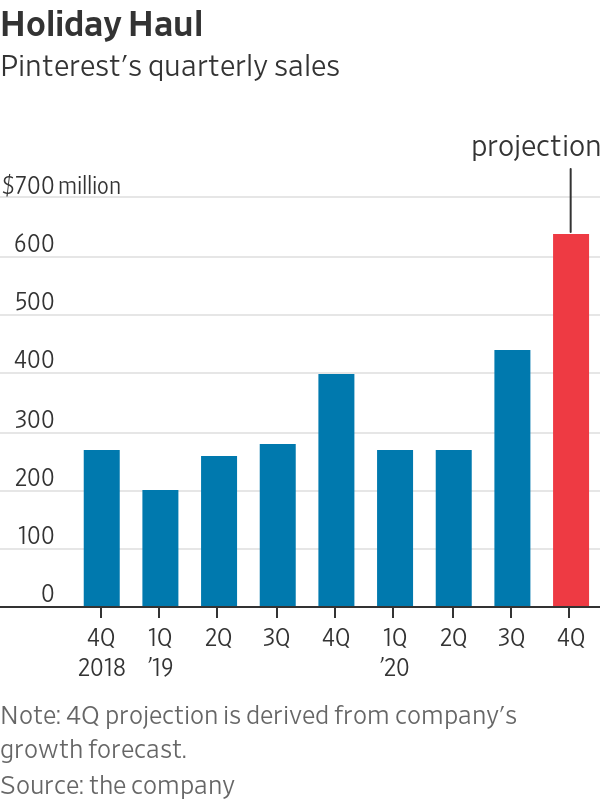 The company said on Wednesday that it grew revenue 58% in the third quarter year-over-year, exceeding even analysts’ bullish forecast by roughly 16%. That is a huge step up from just 4% revenue growth in the second quarter and underscores the appeal of Pinterest’s differentiated platform as a commerce destination just as store closures and health concerns are pushing consumer spending online. Pinterest said it benefited from the broader bounceback in ad budgets with strength coming from small- to medium-size businesses, international businesses and large consumer-packaged-goods advertisers. It also said spending accelerated in the quarter from advertisers continuing to boycott other social-media platforms.

Building on a watershed second quarter that saw a 39% jump in users, Pinterest continued to expand its reach, growing overall users 37% year-over-year. Importantly, while moms have historically been Pinterest’s core demographic, Pinterest said users under the age of 25 continued to grow at a high rate. 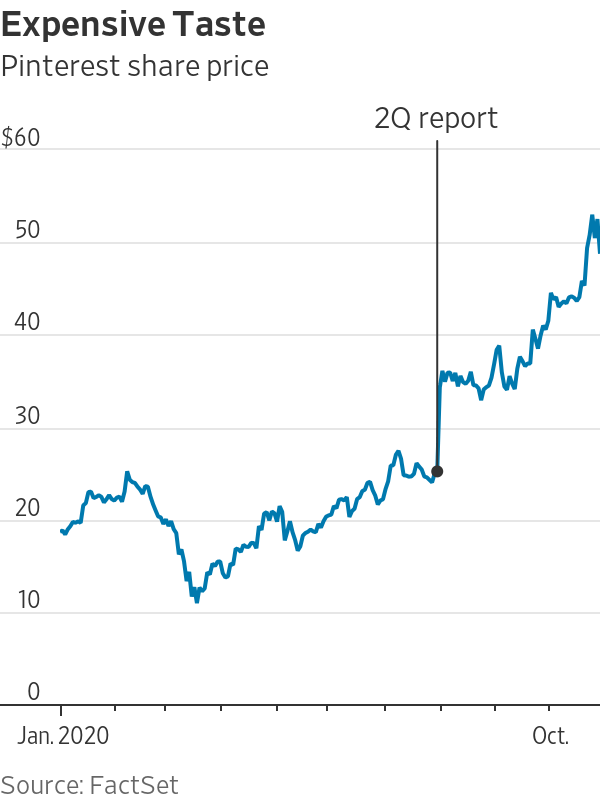 Pinterest shares rose 23% after hours following the report, building on a gain of 96% in the less than three months since its last earnings release. But where other social-media stocks may be topping out in advance of further ad-budget contraction that could come with a sustained Covid-19 spike this winter, Pinterest should continue to see upside as a growing e-commerce destination into the holiday season. Emarketer estimates that U.S. e-commerce sales will rise 36% this year even as in-store sales decline nearly 5%.

Although sell side surveys have shown that advertisers tend to pool their budgets toward more tried and true platforms in an uncertain spending environment, Pinterest’s unique use case also merits advertisers’ continued attention. Pinterest said in a recent press release that holiday shopping on its platform was spiking as early as April for searches such as “Christmas gift ideas” and that the number of its users engaging with its shopping features has grown 85% in the past six months. Whereas most users go to Instagram or
Twitter
to check up on friends or read the news, most users are coming to Pinterest to either buy something immediately or to find inspiration for something to buy in the future.

Indeed, Pinterest said its current expectation is for revenue growth to accelerate to roughly 60% year-over-year in the fourth quarter, even while the company also said it is unclear how long it will continue to benefit from advertisers boycotting other social platforms. And given its third-quarter forecast proved very conservative (growth of 30% versus a reported 58%), that, too, could turn out to be understated.

As social-media companies work to turn their social wealth into physical returns for their advertisers, Pinterest seems to have been built to inspire.