The U.K.'s Experiment With Climate Reporting Is Worth Watching

The U.K. is making its big corporate and financial sectors think more rigorously about climate change. There could be write-downs, but also reassurance for investors that problems aren’t building up out of sight.

From next year, many U.K. companies and funds will have to report how their assets and organizations will affect and be affected by global warming. The new rules, announced by the country’s Treasury chief, Rishi Sunak, as part of a post-Brexit financial strategy last week, are in line with 2017 recommendations from the Task Force on Climate-related Financial Disclosures.

The TFCD standards, to which the U.K. decision will lend weight, cover four main areas: governance, risk management, strategy and key metrics. While the disclosures are largely qualitative, their publication would likely push companies to incorporate climate risks into the financial numbers too.

Big entities will need to comply first, followed by smaller ones over five years. By 2022, the U.K. government expects climate-risk reporting from all companies listed on the main market of the
London Stock Exchange
(excluding a high-growth submarket), half of its large private companies, 75% of U.K.-authorized asset managers and nearly all of its banks, insurers and large pension funds. 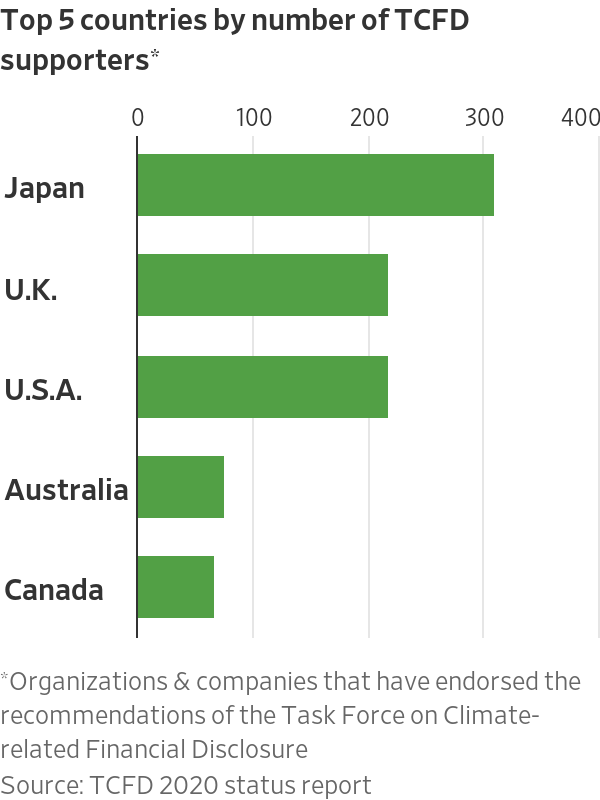 New Zealand made a similar announcement in September, but the U.K.’s decision is important as the country hosts the world’s third-largest stock exchange by market capitalization and the second-most pension assets among countries in the Organization for Economic Cooperation and Development, behind the U.S. Progress on voluntary disclosure has been slow, even though over 1,500 companies and organizations “support” the TCFD.

While companies already have to report all material risks in their financial reports, there is a growing consensus that climate risks aren’t yet understood or priced in. The Commodity Futures Trading Commission recently warned that “climate change poses a major risk to the stability of the U.S. financial system” in a report that also highlighted risks of disorderly asset-price adjustments spilling over into the financial markets. On Monday, global investors managing $9 trillion in assets wrote to 36 high-emission European companies asking for Paris-aligned accounts, which include the financial impact of reaching net-zero emissions by 2050.

Major oil companies are a case in point:
BP,
Royal Dutch Shell
and Total wrote off billions of dollars in oil and gas assets this year when they lowered their forecast long-term crude prices, partly because they expect oil demand to start falling.

Working out who might be hit next is challenging for investors. The potential impact and costs of climate change are complex to estimate, particularly given the long time horizon and range of pathways the world might take as it tries to decarbonize. By forcing companies to work through different scenarios publicly, the TCFD reporting should bring some much-needed clarity to risks outside of obvious problem sectors like oil and gas. It should also shed light on climate leaders and laggards within sectors.

London-listed stocks may suffer in the short term as asset reviews trigger write-downs. The flip side is that U.K. companies could end up looking more future-proof than peers elsewhere. Investors should watch the U.K. test case carefully.