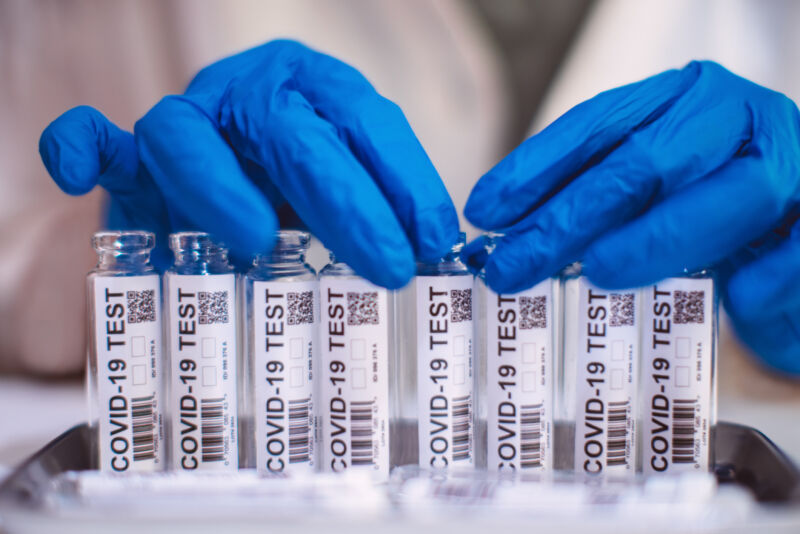 The US’s COVID testing failure has unfurled in stages. First, there weren’t close to enough tests, thanks to cascading policy failures and supply chain issues. Once the supply problem gradually came under control, it was replaced by processing backlogs: As cases soared over the summer, many people were having to wait a week or more to get results back. A national survey in August found that only 37 percent of people receiving nasal swab tests were getting results back in the two-day window necessary for effective contract tracing, while nearly a third of tests were taking longer than four days. This delay meant that, as Bill Gates colorfully told WIRED’s Steven Levy in August, “The majority of all US tests are completely garbage.” The root of the problem, Gates said, was that the federal reimbursement rate for the labs that process COVID tests is the same regardless of how long the results take. Change that, he argued, and the labs processing tests “will fix it overnight.”

A new House bill would aim to make Gates’ idea reality. On Thursday, Mikie Sherrill, a freshman congressperson from New Jersey, introduced the SPEEDY Act, which would tie federal reimbursement to test result speeds. (The full name is the “Strictly Pay for Efficient and Expedited Delivery of Your (SPEEDY) COVID-19 Test Act.”) At the outset of the pandemic, the government was paying about $51 per test for people covered by federal health plans. (The average marginal cost of a standard PCR test varies, but at a high-volume lab it runs at about $40.) To encourage labs to increase capacity, the Centers for Medicare and Medicaid Services (CMS) raised that to $100 in April. Under the SPEEDY Act, tests that deliver results in 24 hours would be rewarded with $125; within 48 hours, the current $100 rate would apply; and for results within 72 hours, labs would go back to the pre-April reimbursement. The government wouldn’t pay at all for results that come back after 72 hours. (To avoid having labs just give up on tests after that window closes, the law would require them to still process the tests in order to participate in Medicare.)

“A turnaround time of over 72 hours is pretty much useless,” said Sherrill, whose staff consulted with public health experts on the bill. Someone waiting for a negative result might be unable to return to work, missing out on a paycheck. Meanwhile, they and their contacts could be spreading the disease.

The industry is not on board with Gates’ critique or Sherrill’s proposal. “The assertion that labs would perform COVID-19 tests more quickly if they are not reimbursed for tests performed outside a specific time window is flat out wrong,” wrote Julie Khani, president of the American Clinical Laboratory Association, the trade group that includes testing giants LabCorp and Quest Diagnostics, in an emailed statement. “The proposal you describe works against our collective goal to expand testing capacity, fails to address the underlying factors affecting turnaround time and threatens access to testing for populations at the highest risk.”

Khani didn’t elaborate on what exactly would need to be addressed for faster results, but experts have variously complained about a lack of chemical reagents, lack of the expensive machines needed to read the tests, lack of staff trained to use those machines, and lack of certified lab spaces. The theory behind the SPEEDY Act is that tying payment to testing result times, and offering a bonus for extra quick turnarounds, will give labs the proper incentive to invest in those resources.

It’s hard to get a precise estimate of the extent of testing delays. There hasn’t been a national survey since August. Anecdotally, it remains trivially easy to find examples of people waiting four or five days for results. Without fast test results, tracking the spread of the virus, and by extension containing it, is impossible.

“If you’re talking about contact tracing efforts and how quickly you find people who’ve been exposed, even a day or two can be a lot,” said Emily Gurley, an infectious disease epidemiologist at Johns Hopkins Bloomberg School of Public Health. By the time most people with symptoms come in for a test, she explained, they’ve just begun infecting other people. If the test takes several days to process, those people are likely to already be infectious by the time the result comes back. Multiply this by thousands or millions and it makes the task of tracing and controlling outbreaks almost impossible. “There’s been a lot of investment in contact tracing programs—building them up and hiring people and training people—but no matter how good those programs are, if test results are late, they’re never going to be that effective.”

The law would only govern federal reimbursement, not private plans or tests purchased by state and local governments. But because Medicare and Medicaid together insure one third of Americans, and the federal government is also covering tests for the 9 percent of Americans who lack insurance, that’s nearly half the market. Meanwhile, the federal health programs shape what happens in the private sector. “Medicare ends up being how we drive many of the changes in the medical system, even for the non-Medicare patients,” said Ashish Jha, dean of the Brown University School of Public Health and one of the experts who advised on the bill. “Private payers in general don’t negotiate every single individual service. They tend to negotiate a broad package of services and they use Medicare’s payment schedule as a jumping-off point. That means whatever Medicare is paying for this test, that will also trickle down into what private insurers are paying for it.”

As with any bill introduced in a divided Congress a month before Election Day, the prospects for the SPEEDY Act to become law are uncertain. Sherrill’s two cosponsors, Suzan DelBene of Washington and Terri Sewell of Alabama, are fellow Democrats. But she’s optimistic that she can pick up broad support and anxious to improve testing before the winter months bring a potentially devastating new virus surge.

“I think it should have a great deal of bipartisan appeal,” she said. “Making sure we have access throughout the country to testing, making sure you know the outlines of the disease—that’s kind of a cornerstone of pandemic response.”

This story originally appeared on wired.com.